24 Heures du Mans, the famous 24-hour race in the French city of Le Mans, is arguably one of the world's most beloved sporting events. For over 70 years, daredevil car jockeys have congregated in Le Mans to find out who the real iron man of racing is. This year, the two-day event managed to attract more than 200,000 spectators. Featuring the famous Le Mans 24-hour race, as well as nine other courses sponsored by the ACO (Automobile Club de l'Ouest), Infogrames' Test Drive Le Mans seeks to bring the party atmosphere into your home. Indeed, the game succeeds on all fronts, but more than that, it is one of the best racing simulation games ever created. Arcade racing stalwarts need not fret, though. Thanks to wonderfully programmed AI and assistance options, Infogrames has you covered too.

Unlike the majority of driving simulation games, Test Drive Le Mans doesn't focus on any particular season or era. Instead, the game forgoes big-name drivers and teams for a reward-oriented approach that is reminiscent of Gran Turismo's approach. Win a circuit and you'll win some cars, but to bring home that coveted GT prototype Audi or BMW, you're going to have to win the game's more grueling, time-consuming courses. In all, there are five game modes: quick race, championship, Le Mans, time trial, and multiplayer. The championship mode lets you participate in a lengthening series of lap-based races, while the game's signature mode, Le Mans, gives you the chance to experience the thrill of a full 24-hour race, which can be compressed to as little as 10 minutes, or you can race in real time for a full 24 hours. Much to Test Drive Le Mans' credit, quick race and time trial aren't just throwaway inclusions, either. Completing the quick race circuit unlocks all of the game's courses for the time trial and multiplayer modes, while first-place finishes and expert times in every mode will yield more cars for your garage. In all, there are 32 cars to unlock, which - in addition to the game's starting 12 - brings the grand total to 44, the brunt of which hail from known manufacturers like Audi, BMW, Panoz, Nissan, and Chrysler.

As far as tracks go, Test Drive Le Mans features ten real-world tracks from the ACO racing circuit, with such fan favorites as Suzuka East, Bugatti, and Donington National, as well as the game's namesake, Le Mans. Once you've decided how to tackle the game, you then have a chance to customize your car and adjust the difficulty. For simulation buffs, the game offers four adjustable variables, namely tire type, downforce management, fuel load, and transmission type, as well as a nonadjustable factor, weather. If you're squeamish about all things simulation, Le Mans offers AI adjustment, braking assistance, and steering assistance. These assistance factors don't just hold your hand, though, they actually allow you to learn the game's braking mechanics and turning physics while they are enabled. If you're new to simulation-style games, or you need extra time to adjust to each simulation-style game's unique handling characteristics, the assistance factors make Le Mans an inviting title. Fans of the genre shouldn't go too heavy on the assistance, however, as it can turn the game into a cakewalk.

Although there are plenty of courses and cars to unlock, Le Mans' true success is its gameplay. Combining a healthy dose of realism with a dash of forgiveness, the folks at Infogrames Melbourne House have created a physics model for Le Mans that accurately portrays the experience of driving modified sports cars over paved tracks. But they've also managed to avoid such modern-day programming cop-outs as overabundant spinouts and rollovers and contrived barricade placement. As long as you have a decent sense of speed and don't hit the corners going 150mph, you're not going to find yourself doing doughnuts on any of the game's tracks. In many ways, Test Drive Le Mans feels like a Formula 1 game, but the heavier bodies of the game's GT-style vehicles make spinouts less frequent and increase the strategic value of running opponents off the road. It isn't pretty, but as racing fans are quick to note, rubbin' is racin'. To that end, putting the pedal to the metal and flooring it is generally a successful approach, but the true route to beating the game is intelligent racing. Offensively, you'll need to force opponents into the dirt, pass on the insides of corners, and take advantage of the CPU's need to pit in order to maximize your advantage. In the same vein, conserving your fuel and avoiding tire wear go a long way toward helping you win the cup.

Infogrames has made Test Drive Le Mans an exciting game of racing, but don't let a few powerslides, drafts, and collisions go to your head - the game's AI is brutal. While you'll eventually learn the weaknesses in the game's preconceived strategies, there's no denying that the game's AI designers wanted you to feel as if you're racing against true professionals. Don't let the game's brutal AI sway your judgment, though - if you practice up in the game's amateur mode and get used to the tracks, you'll hold your own. If you have a few friends to play with, things get even better. Le Mans gives you the chance to take your friends on in any of the game's courses, with or without driving assistance.

In keeping with the game's overall quality, Test Drive Le Mans' audio and visual offerings are excellent. There is no racing commentary, but a high-quality and jazzy racing soundtrack accompanies a satisfying array of assorted sound effects. The racing visuals are a mixture of crisp roadways, object-filled sidelines, and realistic car detailing. While Sega GT managed to portray solid tracks and true-to-life car models, Test Drive Le Mans adds enough trees, spectators, sponsorship logos, and support vehicles to give you the impression that you're actually racing on a real track. There's a minor bit of draw-in across long distances, and the texture quality of some objects, such as the trees, is a bit low, but such quibbles are nothing in light of the overall fluidity of the game's look. Even with 24 cars onscreen at once, or during four-player split-screen mode, Le Mans doesn't slow down or lose any visual detail at all. At the very least, the game's gorgeous rain effects, complete with ghostly low-level clouds and varying degrees of precipitation, are worth the price of admission.

Cost of ownership is what it always comes down to in the end. Thanks to the splendor of the Internet, you could spend hours reading about every detail of Test Drive Le Mans, from the tire patterns left in grass to the braying horns of the zealous spectators, all in an effort to decide whether or not it is the right game for you. If you're a racing game fan, you really owe it to yourself to give Le Mans a try. It is truly a game you will come back to day after day, week after week, aiming to unlock every car, break every record, and experience the excitement of the 24 Heures du Mans. 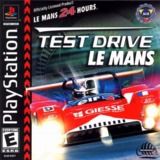