With the current glut of racing titles on the market, it's rather hard for a particular title to gain distinction. Released in this inopportune era, Test Drive 6 will have a hard time competing, especially given Gran Turismo 2's looming shadow. TD6 does offer a host of features, including the requisite single-player mode, tournament-style races, and extras such as cop chases, but, in the end, there are many other titles that offer similar modes, executed much more successfully.

TD6's single-player mode belies the illusion of depth. While the arcade-style gameplay lets you easily become a competent driver, it undermines the game's more "serious" customization/simulation aspects. The analog controls are the only way to go with this one game, the left stick functioning to steer, the right to accelerate and to brake. The intuitive nature of this scheme multiplies the "arcade" feel a thousandfold, making turns at obscene speeds amusingly easy. During powerslides, very little speed is compromised, making it relatively simple to speed through even the most convoluted courses.

The single-player mode is broken down into single races, tournament races, challenges, and cop chases. The single and tournament races pit racers against five other cars in their class, of which there are four. To advance up the automotive food chain, you must win races to score enough cash to buy rides in a higher class. Before each single and tournament race, you must put cash down in a pot, which each computer racer will match; the three drivers in the winner's circle divvy upthe sum, each share relative to the order they placed. The challenges have you race through a predetermined course, and rewards are earned if the race is completed withina set time. The challenges can be played again and again, with the reward being paid each time the previous record is broken.

The single-player cop chases are harshly limited; you can only play as the cop, whose job it is to hound around the racecourses and bust the racers to get ticket money. Cash earned by ticketing is transferred to your account, where it can be used to purchase new vehicles or upgrade existing ones.

The actual courses consist of either standard autocross or closed-circuit racing. Obstacles are littered around the cityscapes, and mundane traffic is your worst enemy. Race into the opposite lane under an overpass, and you'll run into a veritable wall of oncoming traffic; stay in the proper lane, and you'll be gridlocked by Sunday drivers. It's relatively easy to maneuver around bystanders most of the time, but, especially at intersections, things can get pretty cramped. The AI for the civvy cars seems rather haphazardly scripted. You will often see them ramming into each other at intersections or stuck in the middle of the road, idling next to some obstacle. The cops also rampage throughout the courses. Throughout many courses, police units will put forth a halfhearted attempt at impeding your progress by standing in the way of a busy thoroughfare - lights flashing and sirens blaring. Many courses also feature semibranching paths and shortcuts, which let you gain a quick edge on the other racers, if used well.

As far as graphics go, TD6 is merely adequate. Most of the vehicles effectively resemble their physical counterparts, but few effects are used that'll make you look twice. The frame rate is passable, except during busy thoroughfares and intersections, where things get a mite choppy. The textures used are rather bland and muted, nothing positive or negative to chime about. The lighting effects used during night courses seem almost like an afterthought, as they appear to integrate poorly with the rest of the environment.

Infogrames has apparently decided to go with the "street cred soundtrack for a car game" convention, including cuts from artists like q-burns abstract message, Eve 6, and Lunatic Calm. Fear Factory's cover of Cars borders on blasphemous. The tracks are looped during play, making some of them get old faster than they should.

In the end, TD6 should be treated as a light snack. With Gran Turismo 2 on the horizon, it's daft to invest in any other racing game in the near future. TD6's mock-serious approach to arcade-style racing should warrant nothing more than a rental; to humor its illusion of depth would mean a sizable investment of time for a truly shallow return. 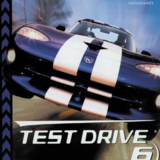 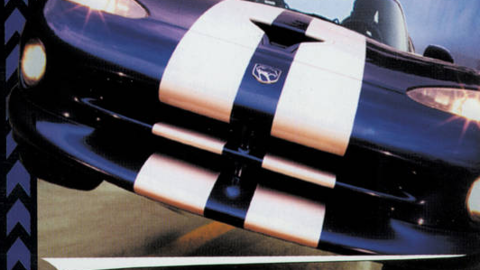