Test Drive 4 feels like driving your car while on medication.

When I was thirteen, my favorite game was Test Drive II for the Amiga. I don't know what made it so much fun, the variety of extensive cars to drive or the exotic locales that I got to race through at fast speeds. At the time, the concept was new, and Test Drive set the standard for other driving games to follow. I spent many weeks playing that game, and needless to say, the Test Drive series has always had a special place in my heart. Therefore, I was quite excited to pop Test Drive 4 in my PlayStation and revisit the series that I hadn't seen in so long. Sadly though, it's not as much fun as I remember it being. I've played many driving games in the past eight years, and I have liked most of them. Test Drive 4 made me realize something though, and it finally hit me: I don't have the same sense of awe when playing driving games now. Why? Because I have a driver's license and my driving experiences take place outside of the home.

The graphics in Test Drive 4 look good and easily compete with the other driving games out there; the 3D animation is smooth and there is a minimum amount of pop-up. The game's seven perspectives are enough to hold you over during the gameplay, and the game also offers a replay of your past race. Hands down, this game looks good enough; it just seems to lack in other areas.

Test Drive 4 feels like driving your car while on medication - you know how to control the vehicle, but for some inexplicable reason you can't. It's not that the play control sucks, rather you will have trouble controlling your vehicle at high speeds, and, every once in a while, you will spin out and stop completely. This is the most annoying thing that happens during the game, and every time it does happen the action comes to a standstill. Each course is also full of twists and turns, meaning that you rarely get to reach your vehicle's maximum speed.

The cars in Test Drive 4 offer a good amount of variety for driving fans. Each car controls differently, but the diversity is pretty superficial. It's good that Accolade gives players a choice, but I for one don't get too excited about driving a Jaguar, let alone a Dodge Viper. I mean, come on, it's a video game - getting excited about driving a particular car in a game is about as sad as remarking that Chun-Li is hot. The five courses presented are fun though and provide a good variety of racing terrain. However, these tracks are rather short compared with some of the other racing games out there and don't contain the depth that other games do (for the best comparison, compare any track in San Francisco Rush with the San Francisco track in this game). The music is also lackluster, failing to build any sort of excitement and perhaps proving once and for all that European-sounding techno is played out.

With so much competition out there, it's hard for this game to rise above the rest. Most games of this type are virtually the same, and it's amazing to see the genre so crowded with look-alike titles (but then again, how much variance can driving games have?). Surprisingly, the game's most unique feature is its drag race mode, which allows you to step on the gas in a mad dash to the finish line against another gamer. That aside though, this game fails where other Test Drive games have succeeded - instead of leading, it feels like it is merely one of the pack. 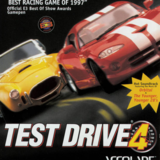 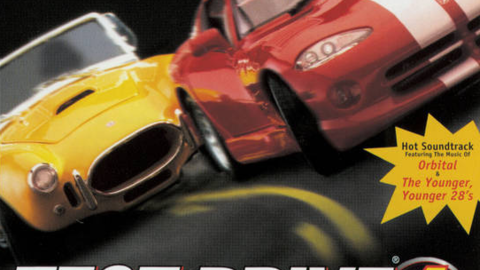 Test Drive 4 feels like driving your car while on medication.