This bare-bones movie tie-in is like a machine with synthetic rubber skin: it's not fooling anyone and you should stay away from it.

If you've ever wondered why movie tie-in games have such a bad reputation, Terminator Salvation can provide an instructive example. Though this third-person shooter is technically sound, it seems to rely entirely on the presumption that you'll be so jazzed to be playing as characters from the movie that you won't notice how boring and shallow the action is. Most of the game has you jogging from skirmish to skirmish, fighting the same three enemies and using the same cover-and-flank maneuver. This quickly becomes repetitive despite the fact that the environments are diverse and detailed, and the few on-rails sequences fail to inject any substantial excitement into the proceedings. The campaign is only about five hours long, there is no online component, and the only multiplayer option is playing the campaign in split-screen mode. It's a sparse effort, yet it is brazenly offered at full retail price. Suffice it to say, it isn't worth it, and even Terminator fans looking for a weekend rental should prepare for disappointment.

The game is set two years before the events of the movie, and though it features some of the actors from the film, Christian Bale is notably absent. The story chronicles a particularly foolhardy mission, and it does a reasonably good job of depicting John Connor on his journey from foot soldier to leader of humankind. There are a lot of cutscenes (sometimes too many) that help lend the game a cinematic feel, but the not-so-great character models and general blurriness keep them from feeling dramatic. The thoughtful and detailed environments do a better job of setting the postapocalyptic stage. It's interesting to make your way through the various conflict-ravaged locations, but your progress is frequently interrupted by fairly long loading screens that give you a close-up view of the iconic Terminator face. You can move this impressively modeled head around (and make it nod in response to silly questions), but its piercing red glare soon becomes an unavoidable reminder that you are sitting through yet another loading screen.

Unfortunately, the action isn't as diverse as the environments. You spend the majority of your time in Terminator Salvation on foot, moving from location to location and dispatching mechanical menaces along the way. You move at a light jog unless you are sliding between cover positions using the clever radial movement menu. A semicircle pops up when you are in cover and incline the analog stick toward another cover position, allowing you to select a new spot to move to. This mechanic makes maneuvering around the battlefield slick and easy, though it is plagued by inconsistency that can leave you exposed to enemy fire or trapped in a corner. Your AI teammate(s) can get you out of a jam by distracting the enemy or firing at its weak point, but they too are prone to inconsistency and aren't fond of using more-powerful weapons or explosives.

So it's up to you to grab the rocket and grenade launchers when you come across them and use them to take down tough enemies, such as the flying Hunter-Killers. With the exception of these HKs and a few other special guests, you fight only three types of enemies throughout the entire game. Each of these is weak to a specific munition, of which there are three loose categories: bullets, shells, and explosives. The three enemies match up to the three munition types, and this simple correlation makes combat very formulaic: destroy the flying drones with shells, shoot the crablike robots with bullets in their weak backsides, and blast the humanoid T-600s with explosives. You can obliterate weaker enemies with explosives, of course, but then you'll have to expend a huge number of bullets on the tougher ones to bring them down. This combat design essentially forces you to use the same simple tactics throughout the entire game. You get into cover, blast the enemy with the appropriate weapon, and flank when necessary. The only real threat is getting caught out in the open and riddled with bullets, or getting meleed by a T-600 (which can kill you with a swing of its arm even if it's five feet away and there is a barrier between you). With some light maneuvering, these threats are easily avoided, and enemies are more than happy to vigorously shoot at your cover position, waiting for you to destroy them.

This repetitious combat is broken up by a bunch of on-rails sequences that put you on the back of a vehicle manning a weapon with unlimited ammunition. These sections are a good change of pace, but they are too lackluster and awkward to be fun. You never get to drive the vehicle, which could have been a thrill on the perilous ruined freeways of postapocalyptic Los Angeles, and it seems that the coolest stuff that happens is conveyed by a cutscene that disconnects you from the action. Shooting your enemies in these sequences is a bit tricky, and not just because you are both moving at high speeds. Your targeting reticle will often drift inappropriately, as if you were standing on a Roomba in the back of your vehicle instead of hunkered down in a fixed position. The struggle to compensate for your vehicle's motion, your enemy's motion, and your mysterious drift makes these sections more challenging and less fun.

Terminator Salvation is a completely linear adventure without any collectibles or hidden goodies to search for. Every weapon is highlighted with a green outline that is visible through walls, so you won't spend any time dillydallying. You can complete the story in under five hours, at which point your only options for replay are to play it in split-screen with a friend or to try it on a harder difficulty setting. There's not a lot of content here, and even the achievements and trophies are the bare minimum; you could earn them all just by playing the game through once on hard. This no-frills attitude runs throughout the whole game and reveals Terminator Salvation for what it is: a stripped cash-in attempt packed with dull, uninspired, and repetitive action. 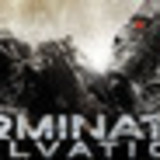