Tennis can be entertaining for a little while, but it's difficult to recommend when there's a much better option available in Wii Sports' tennis game.

Released in late 1985, Tennis was one of the first sports games for the Nintendo Entertainment System. Though it may not seem very impressive now, Tennis was a substantial improvement over the Pong clones that had been passed off as tennis games up to that point. But unlike Ice Hockey, the game hasn't aged all that well. While it can be fun to play a few rounds here and there for nostalgic purposes, it's difficult to recommend when you consider the Wii already comes with a tennis game.

Tennis lets you play a singles match against the CPU, but the only way to play with another person is to team up and challenge the computer in doubles. There's no two-player singles play. There are five difficulty settings: Level 1 is slow and relatively easy, while level 5 is superfast and very tough. The sweet spot for most people will likely be level 3. At this level, the game moves at a brisk pace, and you don't always have to hit a perfect shot to win because the CPU will sometimes make mistakes. A match consists of three sets, and you need to win two sets to win the match. Each game is scored just as it is in real tennis, so if you tie at 40, you'll play out a deuce.

The controls in Tennis are about as simple as they come. Your player tosses the ball into the air to serve automatically, and you hit the 2 button to serve. Hitting 2 also performs a forehand or backhand, depending on which way you are facing. Lobs are done by pressing 1. They can be pretty handy against the computer on the lower difficulty levels but not so much on the harder settings. Rather than aiming your shots by pressing the D pad, your aim is based on timing. If you hit the ball early on a forehand, it'll go crosscourt to the left; hit it right on time, it will go straight; swing late, it'll go crosscourt to the right. Unless you're hitting the ball from a severe angle, it will rarely go out of bounds. Outside of the occasional bad serve, the ball will seldom hit the net either. It's also pretty difficult to hit clean winning shots that blow past your opponent. This means that you'll need to rely on CPU mistakes to win points. As a result, matches can drag on for a very long time. Sure, you can use the Virtual Console's ability to save your game state should the matches run too long, but it would have been nice to simply have the option to set match length to allow for shorter games.

The presentation in Tennis is about what you'd expect for an NES sports game circa 1985. The players are large and detailed (for their time). The court is nothing more than a basic tennis court, and the crowd doesn't move, flash, or cheer after a point. However, the one cool touch is that the person umpiring the match is none other than Mario. There's very little audio in the game. You hear the familiar little ditty that played at the start of many early NES games, which is about it for the music. Sound effects are on par with an Atari 2600 game, which is disappointing.

Many people may have memories of playing some intense games of Tennis in the '80s and may be tempted to purchase the game for a trip down memory lane. These people will probably be slightly let down. The action on the court is enjoyable for a short while, but the omission of a two-player versus mode means that there's probably not enough depth to keep you entertained for very long. 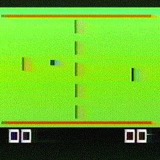 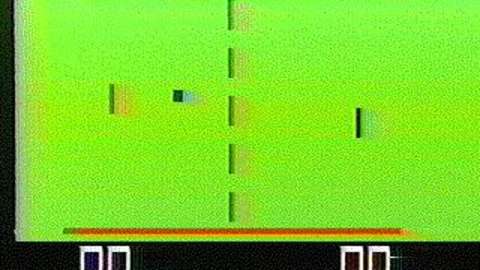