Before it became famous for Pokemon, Game Freak was designing action games like Pulseman. After a long hiatus, it's returning to its roots with Tembo the Badass Elephant, which is one of the best 2D platformers I’ve played. The story of Tembo is ridiculous, even by platform-gaming standards: a mysterious evil force called Phantom has invaded Earth, and humankind finds itself backed into a corner, fighting against this strange, oppressive regime. One hope remains to destroy Phantom: Tembo, the grizzled war veteran with four legs, a trunk, and two massive tusks. It’s up to our heroic pachyderm to crush the evil forces with his might--literally.

Being an elephant, Tembo is not normally a fast creature, but he’s got a whole mess of skills that make him a highly mobile platforming hero. Tembo’s main attack is a Sonic Rush-styled dash attack that smashes through anything in its way. The more you play, however, the more it feels like a mix between the movement of Yoshi’s Island (aerial flutter jumps and ground-pounds, aiming Tembo’s water-blasting attacks) and the modern Donkey Kong Country games (spinning jump attacks and rolls). Part of what makes Tembo so great is the slick, precise controls--you can seamlessly chain attacks and movements into each other, moving with fluidity and finesse. The sheer act of moving Tembo around--rolling and bouncing around the ground into a slide and then immediately following up with an upwards trunk-hammer bash--is a delight.

It’s so fun, in fact, that you might be tempted to just smash through everything. But Tembo wouldn’t be a proper platformer without tricks, traps, and hazards. You’ll realize how carefully your skills must be used the moment you first dash headfirst into a pile of cunningly placed explosive crates. And those aren’t the only threats: while the average Phantom lackey is easy to stomp, they’ll start bringing out heavy artillery and tougher-to-crush weaponry as you progress. Stone walls might not be able to stop Tembo’s charging rampage, but explosive mines and homing missiles sure can.

The hazards play well into the stage design, a well-balanced mix of speedy dashing and bouncing around, careful platforming, clever gimmicks, tricky dodging, and even a bit of puzzle solving… oh, and plenty of crushing through barriers and buildings with mighty elephantine strength. In fact, one of the main goals in each stage is to destroy as much of Phantom’s presence as possible: every enemy or vehicle you crush and each civilian you rescue adds to Tembo’s tally of destruction. Some stages are locked until a certain number of Phantom enemies are destroyed, though if you play through each stage from the onset looking to cause as much damage as possible, these numbers aren’t very hard to hit. Don’t get too trigger-happy with your destructive urges, however; levels are filled with secrets, like collectible peanuts (get 300 for an extra life), trapped civilians (ten in each stage), and hidden rooms. If you smash before thinking and observing, you may discover you’ve destroyed a path to hidden goodies.

That’s not to say the stages are easy. Like those of any good platformer, Tembo’s stages are littered with unique surprises and gimmicks, many of which involve the use of Tembo’s water-spraying trunk to put out fires, water plants that transform into useful objects, push platforms, and stun certain enemies. By combining the dash and the spray button, Tembo can even burst through fiery walls. Often, solving puzzles depends on using your water correctly. Other times, however, the threats are more urgent, such as electrified walls that immediately KO Tembo--and are quickly closing in behind you while you dash through a labyrinth of conveyor belts.

The variety of challenges makes Tembo fun and exciting, though the high-pressure, instant-death sections can become irritating because they tend to eat through your limited stock of lives much faster than any other parts of the game, throwing the otherwise solid pacing off. Much like platformers of old, Tembo has a lives system--once they're gone, it’s back to the beginning of the stage, no matter how many checkpoints you’ve hit. Because stages are fairly lengthy, restarting is a pretty harsh penalty.

After every four stages, you’ll encounter a giant mechanical boss. The boss designs are exceptionally clever. Each boss has a distinct method of attacking and a weakness to exploit that requires skillful play. One boss, a mechanical dragon, you’ll need to push off a cliff while neutralizing its fire attacks; for another, a robot bee, you’ll have to grow springy plants and dodge homing missiles to climb high enough to butt-bomb its weak point.

The worst thing I can say about Tembo is that it’s rather short. If you’re experienced with platformers, you shouldn’t have much trouble charging through Tembo in about six or seven hours. But there are plenty of ways to play it beyond the end screen. Tembo is the sort of game that encourages you to play for 100% completion and/or speedrunning, as well (it even tracks your times and high score). And with Tembo’s satisfying movement and controls, you could play through the game with some amazingly stylish platforming swagger. 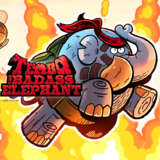 Heidi is glad that Game Freak has once again visited their roots in platforming games. She sees herself replaying Tembo regularly, much like another of her favorite Game Freak games, the Genesis platformer, Pulseman. 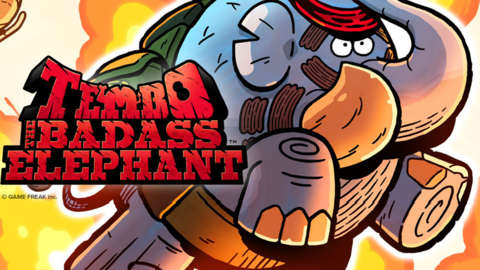 Tembo the Badass Elephant is a larger than life, 2D side-scrolling action adventure from the creative geniuses behind the Pokémon games.