You'd be hard pressed to find a better modern fighting game for such an affordable price.

How does $20 sound for a practically arcade-perfect version of Tekken 5: Dark Resurrection? It's a pretty good deal, and it's going on now on the PlayStation 3. The game is now available as a downloadable product, which makes a good deal even better. While the arcade-port-like nature of it means that you won't get any of the weird extra modes you'd expect from Tekken on a home console, you will get a rock-solid fighting game that also looks great.

This is a port of Dark Resurrection, which is the same Tekken 5 expansion that appeared on the PSP last year. That means you'll get Lili and Dragunov, the two all-new characters that made their first appearance in DR, as well as the returning Armor King. As a bonus, you can unlock Jinpachi, the game's final boss, as a playable character in the PS3 version. He's an interesting addition but not the most exciting character to play with. Of course, you also get the rest of the game's large roster, including Paul, Kazuya, Heihachi, Nina, Law, and so on.

While you won't get bowling, volleyball, or a Tekken Force minigame, you will get ghost mode in Dark Resurrection. Unlike the arcade mode, which puts you up against a handful of fighters and then sends you to the boss fight, ghost mode is meant to replicate the experience of taking on multiple challengers in arcades. You'll continually fight different characters that are governed by different artificial intelligence profiles. So you'll encounter beginning-level Baeks that are easy to beat, but the higher-level Baek fighters know how to use his combos properly and even know a few key juggles. This goes a long way to making them feel more like real human beings, since they all fight differently. This variety keeps the game interesting as a single-player game, which many fighting games have trouble with. Of course, it's still no substitute for actually fighting a real person, which you can do locally. Unfortunately, the game doesn't have any online support, but given the budget price tag, that makes sense.

As you play, you'll earn currency that you can spend customizing the characters' different costumes, much like you can in Virtua Fighter 5 and in the last couple of Tekken games. You can purchase new colors for their outfits, new hair styles, or additional little trinkets, like eye patches. You can also spend your money to purchase the ending movies for the new characters or concept art. Interestingly, Namco has kept the file size of the download a little lower than it would be otherwise by not offering these videos and images as part of the main download. When you go into the gallery menu, the game hits a server and returns a list of downloadable items. You pay a chunk of your in-game money, and it downloads the appropriate file. It's a slick idea, though at 500MB-plus, it's hard to call this a "small" download by any metric.

Graphically, the game follows the look of the arcade game, but it's been outfitted to run in 1080p. If you've got a TV capable of that resolution and are running over an HDMI cable, the game looks incredibly sharp--almost too sharp, in spots, as it'll reveal an ugly texture here and there. It's a great-looking game, overall, especially for a downloadable product, but as it's meant to look like the arcade version, you do get the impression that a Tekken game built from the ground up for the PS3 could look quite a bit better. The game also contains all the same sound effects and music from the arcade game. Tekken has always had hard-hitting sound effects, and they still work just fine here.

Tekken 5: Dark Resurrection makes a great case for digital distribution. Here's a game that might not be the newest game in town, but by clocking in at a budget price and not coming on a Blu-ray disc, it stands out and delivers on the potential of this sort of game-delivery platform. But forget all that nonsense. The bottom line is that Dark Resurrection is a fantastic fighting game, and it's especially sweet if you have one or more Tekken players nearby that'll get into the versus mode with you. 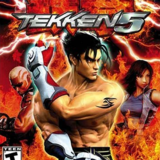