No way in shell.

Without a doubt, Mutants In Manhattan is a disappointment, one multiplied several times over not just by its pedigree, but by the fact that the ingredients for a good game are present. Bringing the Turtles to life using the same attractive, cel-shaded style as the simple-but-satisfying Transformers: Devastation is the right choice. Sticking to the beat-em-up genre that has served the Turtles so well since 1989 is another right choice. The game also manages to get the tone right, with cutscenes delivering enjoyable slices of the Turtles as wise-cracking cartoon crimefighters, trying to figure out Shredder and Krang’s latest evil plan while simultaneously feeding their pizza addiction. And yet the second the controller is in your hands, all the surface details the game gets right begin to fall away.

The tutorial and first stage introduce a plethora of new game mechanics. Green spheres can be collected to gain items and bonuses. The parry system, depending on when your turtle dodges, can have three different effects on an enemy. There is a Takedown mechanic, where unaware enemies can be destroyed in one hit if they don't see you coming first. Special Ninjutsu attacks can be swapped around in the menus, and unlocked using XP used during battle. Items and stat boosts can also be purchased from Splinter in the Turtles’ Lair whenever you find an open manhole. All of this creates the illusion of an action-RPG with depth. But it's a farce; there are very few battles in this game that cannot be solved by spamming basic light and heavy attacks.

The rest, on the other hand, are needless distractions. Items are all over the place, but only the pizzas, which restore health, are of any service in a major fight. Ranged weapons don’t chip away nearly as much health as they should, and are awkward to pull out in battle. Power boosts offer a similarly minimal effect.

Still, one imagines if the superfluous items were grafted onto a game whose core combat worked, it would be less of an anchor around the game’s neck. And unfortunately, the crux of the matter is that combat is a disaster. The core is certainly easy enough to understand, with two attacks, a jump, and a dodge, but hits have no heft, and even the simplest enemies in the first level take an inordinately long time to kill. Ninjutsu attacks, for all their flash and flair, don't always knock an enemy down, only knocking off a small portion of their health bar.

The biggest detriment to combat is the sheer inability to tell what exactly is happening in any of it. If all of the above happened with just one Turtle onscreen, that’d be lackluster and frustrating, but still fundamentally understandable. But Mutants In Manhattan is a perpetual four-player experience, with three immeasurably broken A.I. Turtles picking up the slack when you haven’t roped friends into the fray. Four turtles fighting in the same area at the same time turns the battlefield into a sparkly cartoon dustcloud of mayhem.

If there’s a moment the game actually starts to come together, it’s during boss fights. With only one giant enemy to focus on--whose attacks are flashy and brutal, but easy to read--the relative chaos of these encounters can at least make sense. Action takes on an arcade-y quality that momentarily conjures memories of great Turtles games from the past. There are also secret bosses who can show up when replaying a level that make a sincere plea for replay value, just to see what twists the game might throw your way the second time around.

However, despite its relatively short playtime, Mutants In Manhattan isn’t a boss rush sort of game. There’s lots of running around samey-looking sewers, running across poorly designed rooftops, and performing random, disjointed, and boring fetch quests for a woefully underutilized April O’Neill before it’s time for the big fight. And once again the key problem rears its head. Fights are just wild button-mashers where the fruits of your labors leave the player apathetic, rather than looking forward to what Michelangelo could do to the to the next guy, or what Donatello might pull off this time. For the first time since the infamous dam level in the original NES Turtles game, God, it sucks being a turtle.

View Comments (135)
Back To Top
4
Poor
About GameSpot Reviews 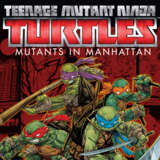 Justin Clark was able to get through the campaign in about five hours, with an extra hour or two to find the secret bosses and try four-player co-op. A lifelong fan of the Turtles, especially in video game form, he would like to take this time to remind scientists that they have four more years to get us closer to the future promised in the Neon Night Riders stage from Turtles In Time. Just sayin’, humanity. GameSpot was provided with a complimentary copy of the game for the purpose of this review.