A game that carries the level of polish, playability, and fun that Tech Romancer does deserves to see a handful of sequels, each building on the mythos established here.

A few years back, Capcom circumvented convention, or at least the company's own convention, and released a little niche game in the arcades called Cyberbots. Cyberbots was a game that went largely unheralded outside of Japan and, for one reason or another, it was only released for the Sega Saturn and the PlayStation in its native country. More recently, Capcom circumvented convention again and released a little niche game in the Japanese arcades called Kikaioh: Tech Romancer. Built on the PlayStation-based System 12 board, it is Capcom's second major attempt at bringing a giant-robot-fighting game to the masses. This time, however, it's in 3D, and the cast is entirely new.

Much more of a port to the high-powered Dreamcast than Capcom's other 3D fighter, Star Gladiator 2, ever was, Tech Romancer is a combination of great graphics and solid fighting fun. If you've ever gotten a kick out of watching giant-monster films, or you have had the fortune to see any number of Japanese children's shows (for example, Ultraman, Go Go Ranger, Kikiader, Mazinger Z, etc.), then you'll most likely dig Tech Romancer. While all the robots are Capcom "originals," they obviously borrow from some of the most famous giant robots Japan ever offered. Evangelion, Gundam, the aforementioned Mazinger Z, Macross, and even Giant Robo have a neo-representative in attendance. If you have a favorite brand of "real-life" robot, chances are you'll find something to like here. Initially available are nine robots, with Kikaioh being the lead robot and others like Diana 17, Bolon, Twinzen V, and Wise Duck being some of the other bots. Of course, your first job is to pick one, but depending on which robot you pick, you may also have to select a pilot, who will determine special attacks and configurations. Once past the initial obligations, you'll discover a fighting game that feels like a traditional Capcom fighter but also plays like a 3D game. The main controls offer a block button, a jump button, and two attack buttons. Although this seems rather sparse at first, you'll soon discover the variations that make this one of the most enjoyable fighters in the last few years.

Unlike Capcom's usual six-button layout, Tech Romancer uses all four Dreamcast buttons, as well as the shoulder triggers. You have a jump and a block button, as well as two attack buttons. The left and right shoulder buttons control, respectively, supermove selection and a side-step/attack move. The backgrounds are 3D, and they feature 3D polygonal buildings, which crumble under heavy fire. Power-ups can be found inside said structures, and when you pick them up (by simply walking over them), you can choose which enhancement to use by pulling the left trigger. Among the items you can pick up are repair boxes, offense up, defense up, hero mode, and power-ups that enable character-specific moves. The Y button performs most of your hand-to-hand moves, while the B button usually results in a long-distance attack, although some robots will launch an additional close-range attack. Various combinations of these buttons (for example, both attack buttons, block plus both attack buttons, both attack buttons plus jump, and others) will launch superdestructive supermoves that fill the screen with all sorts of special effects. Tech Romancer may be the first 3D fighter to have as many over-the-top superattacks as it does normal moves. While the full list of attacks and superattacks is both impressive and large enough to keep even the nimblest FAQ writer busy for weeks, it's the final attacks that offer the wildest visuals. After you've drained an opponent of half his damage bar, you can execute a final attack - a move that, if successfully executed, will end the round in no uncertain terms. The downside is that the move is completely blockable or cancelable, and it must be timed right lest you leave yourself open to a counterattack. This can be useful for a comeback if you are close to dying, but you have managed to reduce your opponent's health enough to try a final attack.Bolon, the hodgepodge ball-shaped robot whose child-pilot is prone to bratty temper tantrums, can serve as a good example to describe a final attack. When you trigger her final attack, a large red curtain falls down and Pollin basically brings her opponent to a tea party. The antagonist always manages to insult Bolon/Pollin, who subsequently blows up the house of cards around them. Likewise, another of her lesser attacks shows Bolon throwing a minitrain and train track down to the ground. These items get underfoot and cause significant damage to the enemy. The attacks are wild and varied, and don't be surprised if your robot transforms, Veritech-fighter style. Other strategic moves - such as the power-break, which exposes turtlers to further attacks, and the steel-dash, which will also open up an opponent to a beating - are necessary to your survival. All of the robot designs are impressive, and they are considerably more memorable than Star Gladiator 2's palette swaps

While playing Tech Romancer, you have two main options aside from the versus mode. Hero-challenge mode is a no-frills arcade mode that runs you through the gauntlet of robots, plus three bosses. The meat of the game is found in the story mode, which adds between-fight cinemas, multicharacter conversations, and even small animations. Each character also has his or her own individualized motif, designed to mirror different television shows. The character and robot you choose will determine which robots you encounter and, occasionally, which paths you choose between stages. Beating the game will also reward you in other ways, specifically in unlocking various hidden items.

The graphics, originally modeled on the System 12 board, have been significantly improved. While not quite at the same level of Soul Calibur, they're certainly pumped up higher than the graphics in Star Gladiator 2. You'd be hard-pressed to find a glitch or a moment of polygon seaming anywhere, even during dramatic close-ups or screen-filling superattacks. While most people won't have seen the original arcade version of Tech Romancer, it's no overstatement to say that these stellar robot designs benefit from the move to the Dreamcast hardware. Other sundry effects also give Tech Romancer that extra level of detail that separates the good from the great. Great lighting effects are present, as are subtle 3D elements such as a starfleet hovering close by in one stage. Craters are also left behind when grenades and rockets scorch the earth. Sadly, the backdrops are little more than flat 2D bitmaps, which aren't as detailed or high in resolution as they could have been, thus lending a dioramic feel to the game.

The sounds in Tech Romancer are all crystal clear and full of punch, ranging from explosions to laser cannons to robot hydraulics to the voice actors' quotes. Likewise, swords clashing, rocket-fists firing, and buildings crumbling all get the appropriate audio treatment. The music is classic Capcom, and if that's your thing, then you'll definitely enjoy the epic, yet cheesy, melodramatic Japanese action-show-style themes presented here. Unlike some of Capcom's recent Dreamcast releases, Tech Romancer contains more replay value than Jojo's Bizarre Adventure, Street Fighter III, and Star Gladiator 2 combined. While those games are not much more than direct arcade ports, with a couple token extras contained therein, Kikaioh: TR has an entire library, called the Techno Dome, which is filled with bonuses like CG movies, downloadable VMU games (which, when played, accumulates points to unlock further Techno Dome options), secret characters (including Jin/Blodia II from Cyberbots), character artwork, and more. To unlock the first few options in the Techno Dome, you must play through with all the characters in the story mode, but considering the thrill of scrapping with giant robots, this is a welcome chore. If you didn't like Power Stone, Capcom's first major 3D Dreamcast game, then this might suit your needs.

Sadly, like all cheap-ass bosses in Capcom fighting games, Tech Romancer's are no different. Similar in style to Valgas from Power Stone, Tech Romancer's final boss takes on two forms - each with two full-damage bars, while you only have one set. You meet your last boss in what is essentially a survival mode for four rounds, requiring you to use all your skills to beat him, while keeping your own damage to a minimum. Perhaps the only downside to any of Capcom's formidable fighting games, the company has not yet created a boss that is just a challenging yet fair fight. Instead of meeting a relatively balanced character like Akuma at the end of a game, Capcom usually throws a Magneto, Gill, or Apocalypse at you. Unfortunately, this trend will probably continue for some time.

Although fundamentally similar to traditional 2D Capcom fighting games, Tech Romancer expands on the over-the-top gameplay style of Rival Schools. This time, however, Capcom has enlisted the aid of a giant fleet of robots to do the scrapping, and it works out great. While these guys aren't as nimble as the Street Fighter cast, Kikaioh injects a lot more fun into the gameplay than games like Virtual On: Oratorio Tangram. While that game is good fun in its own right, the all-consuming atmosphere Tech Romancer provides more than makes up any of its shortcomings. Hopefully, Capcom won't let this one slip away into a one-shot, as it did with Cyberbots. A game that carries the level of polish, playability, and fun that Tech Romancer does deserves to see a handful of sequels, each building on the mythos established here. 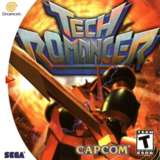