If you've gone toy shopping within the past year, you're no doubt familiar with X-Concepts and Tower Hobbies' line of Tech Deck merchandise. The toys, a collection of licensed skateboards, bikes, and surfboards, let children experience the fun of extreme sports with only their fingertips and a bit of imagination. At between $3 and $10 a pop, though, the fad can quickly turn into an impulse purchaser's nightmare. Enter Activision, with its latest Game Boy Color release, Tech Deck Skateboarding--a solid video game re-creation of the uniquely hands-on Tech Deck experience.

For roughly the cost of six Tech Deck toys, you can experience a total of 40 different skateboards and 10 unique skate parks, all from big-name manufacturers such as The Firm, Birdhouse, Toy Machine, and Zero. There are no real-life personalities included in the game, but the Tech Deck thumb mascot is in full effect to act out your onscreen trick-board fantasies. Like Activision's Tony Hawk's Pro Skater 2, Tech Deck Skateboarding is purely trick based. In the regular mode, your goal is to collect a series of Tech Deck miniboards in the time allotted, while the performance of tricks boosts the number of seconds with which you have to achieve this goal. Each of the game's 10 parks offers four different courses to complete, for a grand total of 40 levels. There are three difficulty levels to complete, as well as a free-play mode for just playing around with your collected boards. Unfortunately, there isn't a multiplayer link-cable option.

Despite the fact that Tech Deck Skateboarding is entirely trick-based and lacks a link-up option, there is still a great deal of gameplay buried within its confines. Before each stage, you're presented with the locations of the skateboards you need to acquire. Courses contain a wide variety of obstacles and trick fixtures, such as half pipes, rails, heavy-duty tires, and crate piles. How you navigate these fixtures and gather more Tech Decks is entirely up to you. If you like, you can simply skate from point A to point B, using the control pad to steer and mashing the A button to jump when necessary. You'll get fairly far this way but find yourself running out of time rather quickly too. This is where the game's trick system and advanced features come into play. If you jump into the air or find yourself at the top of a ramp, you can use the directional pad, jump, and then grab buttons to perform and chain together a wild array of tricks, such as ollies, handplants, 360s, kick flips, and screwdrivers. The more tricks you do, the more extra seconds of time you'll earn to snag new Tech Decks. It's all quick to pick up, easy to learn, hard to master, and quite painless--enabling players of all ages and skill levels to enjoy the game.

Although it won't win any awards for graphics or sound, Tech Deck Skateboarding's visual and audio accompaniments perfectly support its miniaturized premise. Each of the game's 3D environments is colorful and large, with plenty of ramps, vehicles, toys, and silverware to both avoid and play near. There isn't exactly a high degree of detail or animations within each park, which does make things feel repetitive at times. By contrast, though, the game's solitary "thumb" character is a fluid sprite that sports an array of wacky facial expressions and trick animations. The music in Tech Deck Skateboarding is upbeat and snappy, but a number of diverse sound effects and voice samples save the game from being an otherwise average listen.

The real problem with Tech Deck Skateboarding isn't in how it looks, sounds, or plays, but in how long the experience lasts. Even on the X-Treme difficulty level, most players will acquire all 40 boards in a matter of one to two hours. Past that, the free play mode lets you perform tricks to your heart's content, but the value of that type of bonus depends greatly upon your wants in a handheld skateboarding game. While it lasts, however, Tech Deck Skateboarding is great, great fun. 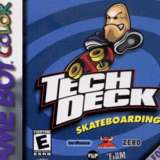 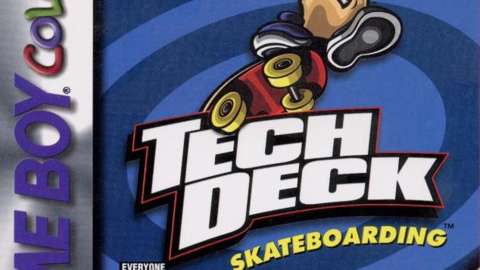