A canvas for your imagination

When I first played Tearaway back in 2013, I adamantly argued that Media Molecule’s delightful and imaginative platformer wouldn’t be possible without the PlayStation Vita. The Vita's medley of distinct inputs—from the touch screen to the front- and rear-facing cameras—allowed for genuine interaction between the player and the many pliable corners of the paper world. Tearaway Unfolded, the expanded PlayStation 4 adaptation that repurposes the puzzles and platforming for an entirely new control scheme proves me ever so wrong.

Although the Vita’s control scheme allows you to more easily and palpably reach out and touch the game, Tearaway Unfolded cleverly uses the DualShock 4’s touchpad, light bar, and motion sensor to establish and maintain a strong link between the in-game world, the on-screen protagonist, and the person holding the controller. Certain sequences feel completely new thanks to the PS4-exclusive mechanics, so even if you squeezed all the content out of the original game, Unfolded makes a strong argument for a return trip.

It doesn’t take long for the mechanical alterations to surface. Instead of using your finger to tear through the thin earth, Unfolded allows you to press the shoulder buttons to shine a bright light on the screen. This both renews the blotchy foliage and textures sapped of color and allows you to lull enemies off cliffs or into traps as you navigate your paper protagonist through danger. In lieu of peeling back paper and stickers using the Vita’s touchscreen, a simple swipe across the touchpad produces gusts of wind that blow away obstacles and send NPCs jolting into the air in bewilderment. You can still use your voice to add life to specific characters or draw your own creations that come alive in the world, but Unfolded is most interesting when it improvises, using the unique strengths of the controller to its advantage.

Once you get a handle on all these new motions and inputs, the puzzles and platforming begin to click as you find yourself mapping out your movements and chaining together abilities. These range from using the wind to throw enemies away from the bridge you’ve restored through your controller’s light, to popping your character off a bouncy pad with a press of the touchpad onto a platform you’ve correctly positioned with motion control. These complex interactions work well for the most part, but there are a few disadvantages to the less precise controller. Drawing with the touchpad isn’t nearly as intuitive as crafting creations on the Vita’s touchscreen, and it can be difficult to grasp the position of your finger on the controller relative to the work space on the screen itself. Even when I carefully drew snowflakes, stars, or crowns to help restore life to the world, the final result often resembled a sloppy Microsoft Paint project that even a kindergartener wouldn’t be proud of.

As a substitute to the touchpad, there’s a free companion app that allows you or a friend to use a phone or tablet as your sketch pad. You can also use the PlayStation camera to capture your immediate environment and slap that design (like you would a wallpaper) onto different parts of the world--adding a more personal flair to the characters and ground textures. The camera grabs your face in real time and frames it within a rift in the sky, further bringing you, the player, closer to the actual game world; it also has the added effect of making you appear as a sort of odd deity. These are smart and more effective ways to streamline the creation process, but what made Tearaway on the Vita so novel was the seamless integration of its hardware’s built-in features. It’s a marvel that Unfolded can succeed without the Vita’s many inputs, but the hurdles of added hardware means it's also lost some of the magic in the transition.

Where Unfolded does have a leg up on its portable predecessor is the presentation; the world is richer and crisper this time around, and everything pops just a little more. The new imagining is like walking through and interacting with your favorite storybook, and while the PS4’s horsepower gives the experience a radiant new finish, the artistic brilliance is what brings it all to life. It’s the ocean’s rolling paper waves, the textured and vivid checkpoint stickers, and the heaps of confetti popping out of delicately wrapped presents that make this delightful adventure an optical masterstroke. It’s gorgeous, original, and, maybe most importantly, thematically consistent. Every new mechanic, location, and story beat finds fresh ways to use paper, glue, and stickers to charm and surprise you, and somehow, it remains visually stimulating throughout.

The story itself is simple, but strong voice acting from the pair of narrators and clever writing go a long way toward keeping you invested in the journey. You play as either male messenger Iota or female messenger Atoi, who are envelopes with carefully folded arms and legs created to help deliver a very personal and important message to you, the player. Along the way, you meet bossy squirrels, aquatic scientists with lab coats, elk self-conscious of their coats, and a jumble of other silly creatures who help guide your personalized messenger across a handful of distinctive environments toward the tear between this world and ours. It’s endearing, charismatic, and liable to paint an ear-to-ear smile across your face—even when an influx of angry Scraps with villainous cackles and furrowed brows fights to thwart your efforts.

It is, however, long-winded. Time and time again, the narrators hint that you’re just one or two steps away from the end of your journey, only to throw you down another puzzle-laden path filled with new challenges. It’s a comical bait-and-switch to begin with, but the repeated occurrences of this stunt pushed me to hang my head and sulk through otherwise interesting late-game environments. It just goes on a bit too long, and while the actual ending sequence is as sweet and winsome as can be, its impact is lessened by the bloated finale.

Even if it takes a camera or a mobile device to fully come together, Tearaway Unfolded is a smart, slick reimagining of Media Molecule’s underappreciated gem. The innovative methods by which you can twist, turn, and bend the colorful paper world provide interesting new challenges to wrap your head around, and the already beautiful world has an even bigger allure on the PlayStation 4. It’s just plain fun, and while it might overstay its welcome, Tearaway Unfolded is a wonderful excuse to jump back into one of the most creatively rich platformers in recent memory. 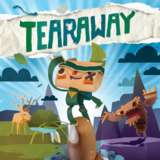 Josiah Renaudin played and enjoyed the original Tearaway on the PlayStation Vita, and has a strong affinity for 3D platformers. For the purposes of this review, he reached the end of Unfolded’s story while trying his hardest to avoid drawing anything vulgar. 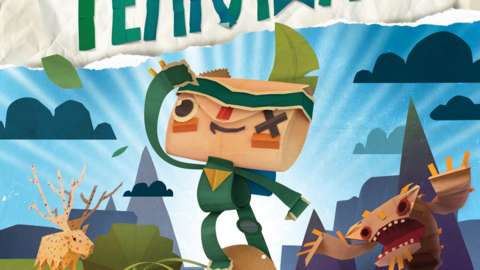 Tearaway is the forthcoming PlayStation Vita game by Media Molecule, creators of LittleBigPlanet.