Once clear of its port of origin, this clever, humorous tale unfurls its sails and becomes a thoroughly entertaining swashbuckling adventure.

The beloved adventure game franchise Monkey Island set sail on a new episodic journey earlier this year and has recently come into port with its fifth and final episode. Tales of Monkey Island chronicles the further adventures of Guybrush Threepwood--Mighty Pirate--as he pursues his often-imperiled wife, Elaine, and tries to vanquish his nemesis, LeChuck. Yet this tale is no heroic cliche, and it takes some amusing twists and unconventional turns. The relationships between lead characters are the engaging heart of the story, while the supporting cast and wacky environments provide ample opportunity for humor. This is a funny game, and though there are some lulls in the otherwise lively pace, the clever puzzles and the playful ways you have to go about solving them will keep you entertained for the duration. Tales of Monkey Island is a lengthy adventure that's easy to enjoy and easy on your wallet, as well as sure to please both newcomers and veteran insult swordfighters alike.

The first episode, Launch of the Screaming Narwhal, starts off where you might expect an adventure game to end, with you (as Guybrush) poised to deal the killing blow to LeChuck and rescue Elaine. Naturally, things don't quite work out as planned, and this sets the tone for the adventure to come. Tales of Monkey Island doesn't stick to predictable conventions, and it doesn't resort to merely flipping these conventions on their heads. It puts a whole different spin on things, creating adventurous and refreshingly odd situations. Yet the game doesn't get bogged down in weirdness or whimsy and continues at a good clip from episode to episode. The story moves nicely among brisk action sequences, thoughtful puzzle wrangling, and expository cutscenes. Though there is occasional downtime, and the first episode feels a bit like taxiing out of the harbor, Tales of Monkey Island cuts through the water at a good pace, keeping you interested and amused throughout the 15-to-20-hour adventure.

Yet it's not just the strange situations you find yourself in that make the game so engaging but the people that populate this whimsical Caribbean. The lead characters are clear standouts because they have fleshed-out personalities and interesting relationships. Guybrush is a goofy hero who would just as soon chew gum stuck on a window ledge as pull out his sword, and it's impressive that his well-meaning-yet-somewhat-bungling heroism shtick never really gets old. Elaine is much more on the ball, and her spirited independence and occasional exasperation with her husband are sweetly countenanced by her steadfast love for him. The evolution of Guybrush's relationship with Morgan LeFlay from The Siege of Spinner Cay (Ep. 2) through Rise of the Pirate God (Ep. 5) is another emotional (and comical) high point, and LeChuck's personality overhaul is a clever inversion of his traditionally evil role. The superb voice acting and great dialogue bring these and other characters to life remarkably well. Although the lead characters are definitely more interesting, even the assorted pirates, brigands, and lawyers you come across have a spark of personality.

Guybrush Threepwood is a guy who gets things done with brains over brawn (most of the time), and there are a lot of items to pick up and puzzles to work out across the five episodes. Though you'll occasionally use a sword to chop things or a bomb to blow things up, most of the other items and actions stick to the humorous and eccentric vibe. Some puzzles rely on inventory you picked up in earlier adventures (perhaps even an earlier episode), while many have their own self-contained set of objects. For example, at one point, you need to gather objects for a spell by deciphering a riddle then use your wits and your inventory to acquire the right ingredients. Other puzzles rely on dialogue, like Guybrush's attempt to help a lonely creature woo its mate using only a handful of lines from a travel phrasebook. Some puzzles combine both items and dialogue, like Guybrush's courtroom foray in The Trial and Execution of Guybrush Threepwood (Ep. 4). Tales of Monkey Island crafts these puzzles in a variety of clever ways, and though you will notice that some quest structures are repeated, this repetition is not frequent enough to feel stale. Solutions are generally pretty easy to figure out, though some of the more obtuse ones can be quite tricky. Usually, you can talk to folks and explore the limited area to gather clues, but if you get really stuck, just bump up the hint frequency and Guybrush will chime in with a helpful observation.

Throughout the course of five episodes, you travel to many different parts of the Caribbean (and beyond!). You make first landfall in a small town with a pirate court, an exclusive nightclub, a mad scientist's house, and the Blow Me Down Glassworks. While this first episode feels a bit slow compared to subsequent episodes, you soon venture out into (and under) the sea, visiting a number of other islands, including the seat of government for an underwater society. And the title of episode three, Lair of the Leviathan, gives you a pretty big clue as to its unique setting. It's fun to travel through the quirky, colorful environments, and revisiting places you've been in previous episodes gives a nice sense of continuity. The cartoony visual style contributes to the game's lighthearted mood, though you will notice some visual oddities from time to time. And there is some frame rate slowdown during action heavy scenes or when Guybrush is running around. The audio also suffers occasional hitches, but for the most part, the sound effects and music do a good job of matching the action and setting the mood.

Tales of Monkey Island harks back to the heyday of adventure gaming with a great story, engaging characters, and a lot of entertaining puzzles. Though the solutions generally aren't as tough as their predecessors were, you'll still feel a rewarding sense of satisfaction as you think your way through this game. Infrequent performance hitches and occasionally slow pacing are minor issues compared to the hours of humor, intrigue, romance, and insult swordfighting you get for the very reasonable price of $34.95. If you've got a hankering for adventure, then get your hands (or hooks) on Tales of Monkey Island. 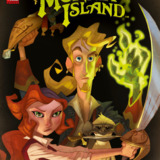