Namco's Tales of Destiny is one of those RPGs that should've been left abroad.

As with the Mario 64 and Tomb Raider phenomena before it, the market has been flooded with RPGs since Final Fantasy VII was released in the US. While America's RPG drought has ended, a hidden plague of less-than-satisfactory RPGs lurks amongst the good ones. Namco's Tales of Destiny is one of those RPGs that should've been left abroad.

Tales of Destiny is the sequel to Namco's Super Famicom RPG, Tales of Phantasia. Taking place in the same world, Tales of Destiny centers around a rag-tag team of youths who uncover.... OK, sparing you the details, there is absolutely nothing original about the story in Tales of Destiny. In addition to a stale and exceedingly slow-moving story, you can also expect boring, moldy characters and dry, musty dialogue. To start, the story takes several hours to "take off," which isn't a problem in itself, but the speed of liftoff is slow compared with any respectable RPG. Namco's pacing of the game is neither rewarding nor predictable, with sparsely used major battles and painfully slow character development. In terms of playtime, Tales of Destiny is a monster of an RPG, but the lack of a compelling story will make the game seem at least twice as long - not a good thing. Even after the story has "picked up," players wander from town to town to hear the next batch of cracker-thin dialogue, fighting monsters every other step of the way. Nothing in the game stands out, rather blending into an endless tapestry of tedium.Tales of Destiny's one unique feature is its real-time battle system and many of the trappings therein. Played like a side-scrolling Secret of Mana, you control every aspect of the lead character's attack in real time while the other three characters attack on their own. Holding up and hitting the attack button will cause the onscreen ego to do an upward aerial attack. Likewise, holding down will result in a jab. Different monsters are more susceptible to different kinds of attacks, and strategic combination of attacks and spells is key to winning. Battle can be paused at any time to change your teammates' attack AI or ask them to use spells or items. In addition to spells, you also have special sword combos that are executed in battle with another button. The developers must have realized that the game's battle system was the only thing they had going for them, accordingly giving the game a fairly annoying encounter rate to increase the time spent in battle. Thanks to this encounter rate, the initially cool battles become as tedious as the rest of the game.

Tales of Phantasia was one of the last big Super Famicom games in Japan, drawing headlines with a whopping 44-megabit cart size and, for the time, a huge amount of voice. Unfortunately, Tales of Destiny has no such technological buzz surrounding its release. Looking and sounding far too much like an SNES game, Tales of Destiny seems like it was originally intended to be a sequel on the SNES that got delayed well into the PlayStation's life cycle. While towns and other locations sport some decent art, the characters almost completely lack animation, unlike many of the more recent 2D RPGs. In battle, the characters are large but still lack noteworthy animation. Spell effects are also standard SNES fare, as well, relying on transparency and Mode 7-esque effects. The game's overworld is presented with the game's token polygons but looks hastily done, especially with the garish 2D sprites walking over it. Musically, Tales of Destiny has a series of peppy, generic RPG tunes that are as devoid of hummability as they are overplayed. The game's battles are accented with voices, but Namco didn't bother translating them from Japanese, so a majority of the players won't care or will opt to turn them off in the options menu.

Tales of Destiny isn't terrible but simply reeks of being on Namco's back burner for far too long. So little is exciting or new here that you are probably better off playing another RPG or two in this game's stead. 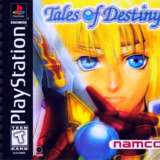