If you value the gameplay that really makes an RPG what it is, you'll find a lot to like in Tales of Destiny II.

The 1997 release of Final Fantasy VII on the PlayStation created an interesting rift in the RPG genre. On one side, you have lavishly produced pseudo-cinematic epics like the latter-day Final Fantasy games and Sony's derivative Legend of Dragoon. On the other side, you'll find all the Little RPGs That Could--games like Tales of Destiny II. RPGs from the first category cater to more than one audience, satisfying genre fans and casual gamers alike. Remove the graphics, though, and you lose the attention of the mainstream, which is precisely the situation that the Tales of Destiny series is in. Those looking for an FMV extravaganza need not apply, but if you value the gameplay that really makes an RPG what it is, you'll find a lot to like in Tales of Destiny II.

Unfortunately, we should address the story issue first in looking at Tales of Destiny II. In short, RPG veterans probably won't be very impressed. A mysterious young girl whom nobody can understand falls from the sky and is discovered by small-town friends Reid and Farrah. Through a series of standard RPG contrivances, the pair discovers that the girl's name is Meredy and that she has come to prevent the collision, or "grand fall," of her world, Celestia, with Inferia, Reid and Farrah's planet. So, with the help of some friends picked up along the way, Reid, Farrah, and Meredy set out on a quest to collect a set of elemental spiritual beings that can stop the grand fall. RPG diehards will recognize a number of clichés in this setup, but that's OK, because Tales of Destiny II isn't a game they'll play for its story. Rather, the game's positive aspects are all in its gameplay and presentation.

If not for the graphics, voices, and FMV, Tales of Destiny II would not be out of place on the Super Nintendo about eight years ago, during the golden age of 16-bit RPGs. It recalls the gameplay of those days of yore with a solid RPG framework of random enemy encounters, level building, and hidden treasure chests. Tales of Destiny II's battle system, however, is the one big departure from the classic RPG formula--rather than using a turn-based system, fighting occurs in real time. As the player, you directly control Reid in a 2D side-scrolling environment against your enemies. You can move him back and forth and control his physical and magical attacks with an almost fighting game-like control system. Your other party members fight alongside you, controlled by the game's AI. Using a strategy setup menu, you can prioritize their various maneuvers--one character can be made to emphasize offensive magic, for example, while another heals. The battles are typically very fast-paced, and their focus on action makes them less tedious than the combat in many other RPGs. In fact, Tales of Destiny II feels very fast overall. Load times are short, your character dashes quickly around the overworld, and menu access is expeditious. Even the short summary of statistics after a battle is rapidly displayed before you're sent on your way. It may seem like a trivial point, but all this speed keeps Tales of Destiny II from feeling like a chore, as some slower games can.

One of the effects on modern RPGs brought about by Final Fantasy VII is an ever-increasing focus on complex 3D graphics. Refreshingly, Tales of Destiny II bucks this trend--like its predecessors, Tales of Phantasia and Tales of Destiny, it presents itself in lovingly crafted 2D graphics. Its backgrounds are of a subdued, hand-painted variety, and the sprites and backgrounds used in its battle scenes are similarly, well, flat. At a time when Final Fantasy X is only a few months from release, many RPG fans will quietly applaud Tales of Destiny II's adherence to the old RPG ways.

As is often the case with RPGs, Tales of Destiny II is best recommended to real fans of the genre. Its story won't quite engage your intellect, and its graphics won't blow your mind. The fact remains, though, that if you like RPGs, it's a good bit of fun to play, and for fans of fun games, that may be all the recommendation necessary. 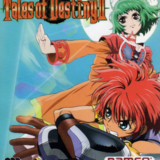