Tales from Space: About a Blob Review

Though it offers few thrills, About a Blob serves up plenty of palatable platforming action.

A formless blob of goo isn't the most likely protagonist for a game that involves a lot of running and jumping, but when said blob comes from space, well, all bets are off. In Tales from Space: About a Blob, you control a gelatinous orb that is trying to escape captivity and leave a cartoonish version of Earth. This blob's basic locomotive capabilities are augmented by a few neat powers that are responsible for most of the game's appeal. You can absorb sundry items to increase your gooey mass and spit them back out again to vanquish foes and remove obstacles. Your range of motion is significantly increased once you gain the power of magnetism, and turning yourself into a rechargeable battery opens up new navigational challenges. Yet, even with a full complement of abilities, you probably won't have much trouble figuring out how to proceed. About a Blob is more platformer than puzzler, and challenge-seekers will have to adopt a collect-'em-all mentality or a yearning for online leaderboard fame if they want to find satisfaction here. Though this adventure may not strain your reflexes, stump your brain, or stimulate your imagination, it still offers a good amount of mild-mannered platforming fun.

When a blob finds itself trapped inside the laboratory of a sinister-looking scientist, what choice does it really have? As you embark on your escape, you become acquainted with the basic controls. Inclining the analog stick makes you slide around the level, and you can leap into the air with the press of a button. You can hold a button to slide faster and set up longer jumps. You can wall-jump, and if you manage to get some of your blob matter up on a ledge, your wall-jump will be more vertical, allowing you to reach higher areas. You can also ground-pound to destroy enemies or environmental objects. The blob isn't really built for speed, and your jumps have a certain weight to them, which creates a sense that you are hauling yourself through levels rather than propelling yourself. It's a strange sensation that can take some getting used to, but thankfully, you never feel as if the blob is out of your control.

As you progress through levels, you must absorb items to increase your size to the target diameter required to pass the next checkpoint. You start off gobbling up small things like broken glass and models of atoms; then, you move on to larger objects like crayons, cookies, and bottles of paste. As your size increases, your view of the level zooms out a bit, changing the perspective to accommodate your girth. It's a neat effect, and it's fun to revisit previous areas as a much larger creature. Provided you don't perish and restart at a checkpoint, you retain everything you absorb throughout the level. Absorbed items also serve as ammunition. You can shoot your contents piece by piece in a direction of your choosing, and this ability comes in handy for smiting enemies, hitting switches, and breaking obstacles. And, as a nice convenience, you can summon any jettisoned items back to you with the pull of a trigger.

These basic abilities are useful from the get-go, but once you're a few levels in, you gain two other powers. One is the ability to attract or repel yourself from any metal surface that is outlined in glowing purple. This allows you to climb walls and traverse ceilings, as well as propel yourself to new heights or across large gaps. These simple applications give way to more complicated push/pull maneuvers and situations where you move the magnetic objects to solve puzzles. Your other new ability lets you drain electricity from power sources and deposit it elsewhere, allowing you to manipulate machinery and remove obstacles. These two abilities often factor heavily into environmental puzzles. In one area, you must imbue a platform with power to get it to start moving through a field of deadly lasers and then use magnetism to position yourself, so you don't get zapped. In others, you have to tap the magnetic power button to keep yourself hovering between two spiked surfaces. Most of the puzzles are fairly easy to figure out, and though executing the solutions can occasionally be tricky, About a Blob isn't a very challenging game.

If you do want a challenge, however, you can seek it out. Each level is dotted with tiny blue orbs to collect, and the game tracks which ones you've grabbed. Some are in hard-to-reach spots, others must be retrieved once you've reached a certain size, and a few appear to be only accessible during cooperative play. At any time, another local player can drop in to join you, and you each control your own blob. Blobs can jump off of each other to reach higher places where the blue orbs sometimes hide, and by the same principle, they can also get in each other's way and make things tougher. It's best to play solo if you're striving for a speed run because the target times for each level are another way About a Blob presents a challenge for those who want to seek it out.

The accessible difficulty level comes to an abrupt end with the final boss, who forces you into repeated patterns of precision jumping that are both aggravating and incongruous. Yet, despite ending on a sour note, About a Blob is a very palatable adventure. The light puzzle and platforming challenges come at a good pace and will likely retain your interest in the hours it takes to complete the game. About a Blob won't wow you, but its interesting mechanics and silly attitude are enough to entertain. 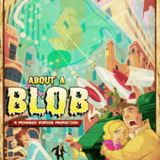