There's really nothing legendary about most of the old arcade games found in Taito Legends 2.

Taito Legends 2 compiles more than 35 of the classic arcade manufacturer's games onto one PlayStation 2 disc. All in all, it's a well-emulated compilation of games--but are they actually legendary? No, not really. With the possible exception of Qix, and, if you're a fan of shooters, Darius Gaiden, most of the games found in this package are little-known, easily forgettable arcade games of varying degrees of quality. If the list excites you and makes you feel nostalgic, chances are you'll enjoy the disc. But we're willing to bet that the chances of you being a gigantic fan of Don Doko Don or Crazy Balloon are slim at best.

These games cover a variety of genres, from shooters to puzzle games, general action, and even what almost but not really passes for a fighting game with Violence Fight. No, you're not fighting violence with more violence, as enticing as that sounds. It's a basic one-on-one fight that has more in common with something like Pit Fighter than with Street Fighter. The best thing it offers is that when you knock someone down, the game prints "GOGON" on the screen, as if that were some kind of Batman-style sound effect. On top of all that, one of the selectable fighters is named Lick Joe. Lick what? There's also Growl, where you attempt to stop animal poaching by beating the crap out of dudes. Overall, there are more totally ridiculous games in this collection than honest-to-goodness classics.

Maybe you like totally ridiculous games--but you probably don't, which makes this compilation hard to recommend. It seems like all of Taito's big marquee hits were already included in the first volume, making this second edition a disc full of curiosities and atrocities from a bygone era. If you're totally curious and can enjoy a middling old arcade game or two, you'll probably get a laugh out of these legends. Otherwise, stick with the first volume. 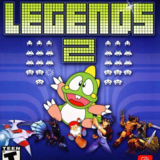