Experienced players will breeze through the game in less than five hours, almost never having to push the limits of their gaming prowess.

After bouncing between Activision and a few other US publishers, Tail Concerto has finally been released in the US. Originally developed by toy mega-marketer Bandai, Tail Concerto represents a shockingly uncharacteristic attention to originality and production value. A delightful, light 3D platformer perfect for gamers of all ages, Tail Concerto doesn't quite live up to its potential, but it is enjoyable all the same.

Tail Concerto takes place in the fantasy world of Prairie, a floating archipelago inhabited by bipedal, anthropomorphized dogs and cats. Racial strife is rampant - the cats of the world, lacking government representation, feel oppressed by the dogs who rule over Prairie. Three feline sisters, Alicia, Flare, and Stare recruit a small army of adorable kittens and form the Black Cats Gang, a radical military organization designed to help the cats split away and form their own nation. Influenced by the nefarious Fool, they seek five legendary crystals, which they believe can create a nation for them. Unbeknownst to the three sisters, the crystals are actually the key to resurrecting the Iron Giant, an apocalyptic robot whose enormous pieces are embedded throughout Prairie's islands. Enter Waffle, a work-a-day cop with a floppy-armed robotic suit. Having foiled the Black Cat Gang's first attacks, Waffle gets the unfortunate assignment of locking up the three sisters, as well as apprehending any minions encountered along the way.

As cliche as much of Tail Concerto's story is, its gameplay is surprisingly fresh for a 3D platformer. Waffle's suit is equipped with a bubble gun, a teleport device, and the aforementioned floppy arms. The bubble gun will can damage any enemy vehicles, as well as temporarily immobilize any fleeing kittens. After grabbing the cats, Waffle tosses them into the teleporter on his back, instantaneously whisking them away to prison. On a more sadistic note, Waffle can also pick up pieces of furniture in people's houses and smash them against walls, serving no real purpose in the game. More useful, especially on the bosses, is the ability to pick up and lob back the bombs that the enemies generally attack with. Waffle's suit can also perform a majority of the other 3D platformer basics, such as climb and move hand-over-hand while hanging. In one stage, Waffle can equip his suit with a jetpack, fly about a huge debris field, and hop from island to island, occasionally pausing to let his jets cool. Even though Tail Concerto is primarily an action game, a number of little quests, spoken dialogue, and anime cutscenes are liberally scattered throughout the game to move the story forward and keep the game from becoming mindless.

Prairie is a beautifully envisioned 3D world, complete with forests, floating reefs of island debris, and huge mechanical fortresses. Virtually every surface is textured, and each environment is alive with animation and detail. Tail Concerto's 3D engine is speedy enough, but it has a high rate of polygon dropout and sorting errors. The game's camera intelligently pans most of the time, but it has trouble in some tight places. During action scenes, you can adjust the camera's position relative to Waffle, allowing for some minor control. Limited as it may be, the standard viewpoint is sufficient almost all the time, with the extra camera angles just helping out in a few situations. The game's excellent anime sequences, fluidly animated and lushly colored, also show an impressive level of effort. Tail Concerto's music is not as grand as the game's title might imply, however. The peaceful and subdued score is fairly hummable, but it does not stand out enough to warrant any special mention. On an unfortunate note, Bandai of Japan deemed the beautiful J-Pop intro song of the Japanese version to be "for Japan only," and replaced it in the US version with a rather weak orchestral piece. The game's sound effects are clear and effective, using voice often to tell the game's story and add personality to the boss encounters. Atlus' text and voice adaptation is very well done overall, truly giving the player the feeling of an interactive cartoon.

Tail Concerto's only real flaw is its length. Experienced players will breeze through the game in less than five hours, almost never having to push the limits of their gaming prowess. The game feels as though it could've been a lot more. For example, the jetpack stage is practically only a bonus stage, but it could've been used as a training session for a real jetpack action scene. Instead, the jetpack is nothing more than a gimmick for one minor quest. With gaping holes of opportunity like that, some players are bound to feel a tinge of dissatisfaction after completing the game.

Bandai has an excellent starting point for a series on its hands. Tail Concerto's furry world and gameplay basics could create an exceptional game when fleshed out beyond their current state. Even in its current state, however, Tail Concerto is definitely worth a look - games this pleasant and light don't come along that often, and they are a welcome change from the norm. 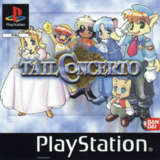