Tacoma, the newest game from Gone Home developer Fullbright, tells an intimate story about characters who aren't actually there. Like Gone Home, Tacoma weaves a complex narrative, but it goes beyond the scope of its predecessor by aiming to tell both a smaller-scale story as well as the larger political context around it.

It's an approach that works for the most part. Meticulous attention to detail makes even the most mundane things, like a forgotten book in a corner or a bottle of shampoo, captivating, and strong voice acting and writing gives surprising depth to characters who are physically absent from the story itself. But its two levels never really intersect in meaningful ways, culminating in an ending that's thought-provoking but short of being revelatory.

In Tacoma, you take on the role of Amy Ferrier, a subcontractor who is tasked with retrieving AI hardware and records from the Tacoma space station. Though the six-person crew is gone, you're able to recover short, augmented-reality recordings of their final days on the station, including their AR "desktops" and the tabs and emails they had open. Interacting with these recordings makes up the majority of your time investigating Tacoma; you'll listen in on one conversation before rewinding and following different crewmembers through the same period of time, accessing their desktops to "complete" the recording.

Hearing their conversations and reading everything on their desktops is both intimate and lonely in a way that's immediately compelling. One of the first recordings you find involves the crew setting up for a party before an object strikes the station, rupturing the oxygen tanks. It was captured three days before your arrival, which means you're seeing the hologram outlines of the crew mime party preparations among the debris that followed. Trash and fallen decorations tell the story that the recording doesn't: that the crew, worried and scared, left everything where it fell.

With only two days of oxygen left, many of the recordings involve the crew arguing, problem-solving, or comforting one another as their time starts to run out. Even without facial animations of any kind, it's easy to interpret their emotions, mostly due to phenomenal voice acting from the cast. But to really understand the crew's dynamics, you have to poke around their emails and IMs, the books and keepsakes in their bunks, and the few recordings that capture them alone. No one scene, character, or object is more important than any other--things like photos or IMs only become meaningful when you figure out their context, so each new piece of information works in tandem with everything else you've found.

There's a couple on Tacoma, Nat and Bert, who are almost always together. On one level, you get to know them as a pair through their spoken conversations, but there's another layer, consisting of private IMs and emails, that develops them as individuals. Early on, for example, you can listen in on Nat expressing frustrations about life and work on Tacoma to Bert. Later, in a private message, Bert reveals the fear that she's holding Nat back, since they're stationed on Tacoma because it was the only job Bert could get. It at first seems like a potential source of conflict between them, but Nat never blames Bert for their situation, even in direct messages to others. That complexity underlying their interactions makes them feel more real, rather than devices that exist solely to create more drama.

Each of the human crew members is given this kind of layered depth, down to the books and knickknacks tucked away under their beds. But there's also an AI on the station, Odin, who's a bit more of a mystery. He serves as the main confidant for one of the crew members, Sareh, and through their conversations you learn more about how artificial intelligence operates under the governance of a powerful corporation. You don't, however, get to know as much about Odin as you do the crew, which isn't necessarily a bad thing. His private thoughts are inaccessible, and the mystery drives you to figure out where AI fits in this society.

Corporate AI and the politics of automation are a huge source of conflict off the station, according to articles and emails you can find around Tacoma. There are groups that support full automation of facilities in space, while human workers have formed unions to protect their jobs. Sareh's friendship with Odin is the main connection between the narrative on Tacoma and the bigger picture stuff outside of it, but it feels incomplete, like some of the details that could contextualize it further are missing. Part of that is your inability to access Odin's private thoughts, since he doesn't have anything like an AR desktop, but mostly it's because no one really addresses the political climate, even though it directly affects them. It all feels very far away until the end, which dulls the impact of an otherwise interesting background story.

That's not to say that Tacoma isn't impactful. I'm still thinking about it, inferring what wasn't spelled out for me and wondering about the complex politics of its near-future world. Mostly, though, I'm deeply attached to the Tacoma crew, who I only got to know through projections and the things they left behind. Out of everything, that's Tacoma's greatest accomplishment: getting you to care about people who aren't even there.

Editor's note: We've now had a chance to test the Xbox One version of the game and have updated the score to include that platform.

View Comments (81)
Back To Top
7
Good
About GameSpot Reviews 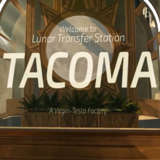 Kallie finished Tacoma in five hours and watched all the crew recordings. She also played a round of zero-gravity basketball and spent some time searching for Easter eggs. A complimentary code was provided for the purposes of this review.