It's a fast-paced, colorful, action-packed space combat game with a branching campaign and an enjoyable story, as well as a solid multiplayer mode.

Tachyon: The Fringe is fundamentally similar to other space-combat simulations, and as such it isn't well suited to anyone who won't accept it for capitalizing on the popular imagery of deep-space dogfights. However, fans of space sims will find that there's actually a lot to like about the game. It's not a sweeping space opera or a hard-core simulation of what it might be like to be an outer-space pilot - instead, Tachyon is a fast-paced, colorful, action-packed space combat game with a branching campaign and an enjoyable story, as well as a solid multiplayer mode.

Tachyon's a good-looking game, but it's guilty of looking like most every other space-combat sim to date. As such, you might have trouble picking it out of a lineup: The game's ship designs are fairly typical of what you'd expect, despite the fact that the game's two prominent space-faring factions have distinctively different styles of spacecraft. Tachyon's weapon effects are also fairly bland, although some of the game's special effects, such as the reflective cockpits, the gloriously bright ship explosions, and the inky, colorful nebulae look quite good. In addition, Tachyon uses detailed 3D models and clean texture maps for the fighter ships, whereas larger objects, such as space stations are positively gigantic, though they don't look very special aside from their scale. Otherwise, Tachyon succeeds in making outer space inviting rather than empty, as you'll fly not only through colored nebulae but also through scenic space junkyards, police-trafficked commercial hubs, planetside stations, and more. However, Tachyon's interface and first-person heads-up display look unpolished by comparison, and the motion-blurred streaks and stars don't create a very convincing sensation of high speed, so in the end, the game looks somewhat inconsistent.

Unfortunately, Tachyon doesn't sound as good as it could have, either. NovaLogic made much ballyhoo about Bruce Campbell providing the voiceover for the game's main character, the gun-for-hire Jake Logan. Jake not only has the voice of the star of Evil Dead and Army of Darkness, but he also has his likeness and his mannerisms. It might seem like a gimmick that Bruce Campbell's in Tachyon, but in all fairness his in-game alter ego Jake is actually a pretty cool guy, as game characters go. He deadpans one minute and makes up lousy excuses the next. He's funny and he's likeable, and though he's a veteran pilot, his experience hasn't gone to his head - and he makes Tachyon seem campy while it might just as soon have seemed generic without him. But other than Jake's, the voices in Tachyon range from average to not so good, while the game's sound effects are pretty weak, particularly the sound of your ship's lasers. At least the explosions are nice and loud, while the soundtrack keeps the pace well - the techno and pseudo-symphonic tracks won't sound like anything you haven't heard before, but they tend to cue up at just the right times, either when the action picks up or the when tension rises.

Tachyon has a lot of missions and a lot of variety between and within them, while the missions themselves are concise and tend to avoid the drawn-out downtimes and long-flying sequences often associated with the genre. Instead, Tachyon typically lets you use your autopilot to skip straight to the good parts, and when Jake isn't keeping you entertained, the space combat probably will. Tachyon has a fairly simple but highly responsive flight model. The game's most interesting midflight feature is that all the ships have the ability to slide, or to continue along the same heading while rotating in place. Once you learn the trick, you can literally zigzag about the space battlefield, and together with the ability to reverse your boosters and fly backward at the touch of a button, you'll find that maneuvering in Tachyon is both fun and also quite challenging. The game lets you set your ship's systems' energy levels and readily transfer energy to and from weapons, shields, and afterburners, but aside from these energy-management functions, Tachyon's flight model is more reminiscent of action shooters than of more complex simulations. Like its simulation of space flight, Tachyon's branching campaign isn't especially complicated or detailed, but it works well and helps make the game enjoyable. If Jake weren't the hero, you might not have cared for the game's familiar "freedom fighters vs. corporate-swine" premise, but since he is, you'll find that Tachyon's story grows on you and that most of the missions you'll fly will be fairly engaging. Furthermore, you'll get a lot of time out of Tachyon, not because you'll have to repeatedly restart difficult missions, but because there's a good amount of variety in the missions you can choose from and in what new ships and weapons you spend your earnings on in between. There's also a fundamental decision you make relatively early in the game that determines which side you'll take and which ships you'll fly thereafter, so, if nothing else, Tachyon's worth playing through a couple of times to get both sides of the story. However, all of Tachyon's missions are scripted, and oftentimes you'll need to complete a particular series of missions to advance to the next plot sequence, so the game isn't as open as it might first appear. Yet the game's campaign structure generally lets you call the shots and determine the best course of action, even though you'll never lose sight of the plot in doing so. It's an effective combination of what seems to be two mutually exclusive mission-design philosophies.

You can recruit wingmen for a cut of your profits over the course of Tachyon's campaign, but you'll probably find yourself flying solo most of the time. Jake's touted as a hotshot pilot right from the start, and you'll soon find yourself living up to his reputation as you gun down scores of enemy ships with little trouble. The game gets more difficult later on, but mostly because you'll be up against highly unfavorable odds. Your foes have a few evasive tricks they'll use often, and they have a nasty way of drawing your attention away from objectives you might be trying to defend, but otherwise the enemy ships in Tachyon aren't that big a challenge. They don't make effective use of their slide-and-reverse thruster abilities, and instead they just pitch and yaw while traveling forward with occasional bursts of speed. Your wingmen will act similarly, and your communications options with them are quite limited and generally trivial.

Like all recent NovaLogic games, Tachyon is also playable online on NovaWorld, the company's free proprietary service that lets more than a hundred players compete simultaneously. Tachyon features two different multiplayer modes: In the more conventional arena-match mode, you simply outfit your favorite ship with all your favorite weapons (from pulse lasers to railguns) and with all your favorite gadgets (from electronic counter-measures to combat scanners), and send it online in a huge multiplayer deathmatch. Tachyon's smooth control and action-oriented flight dynamics make it well suited for deathmatch play. The other mode, base wars, puts you in league with one faction in a pitched battle against the other. You fight to claim power-ups that you can bring back to your starbase to make more technology available to you so that you can upgrade your ship. Eventually, you'll gain the means of destroying the enemy's base, which is the only way to win. Base wars is an enjoyable spin-off of many popular team-play action game modes, and it also helps show off the different characteristics of the game's two warring sides.

No matter how you choose to play it, chances are you'll have a good time with Tachyon. It closely follows most of the space-combat-simulation genre's conventions but deviates just enough to seem different within a genre of mostly similar-looking, similar-sounding games. The game lacks the polish and the epic scope of more ambitious projects like FreeSpace 2, but thanks to its quirky hero, its attractive graphics, and its accessible gameplay, Tachyon is nevertheless competitive with the genre's best examples, while it'll also help reestablish space-combat simulations in the gaming mainstream. 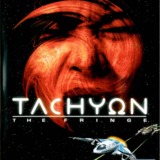 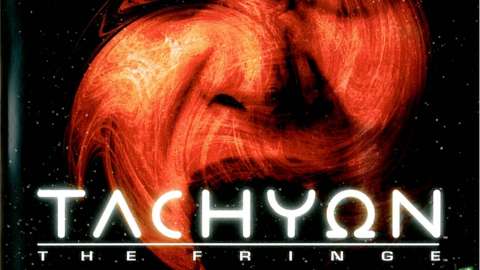 It's a fast-paced, colorful, action-packed space combat game with a branching campaign and an enjoyable story, as well as a solid multiplayer mode.