The ideas behind making the online and offline games so similar are interesting ones, but in the end, the game itself isn't interesting enough to live up to the concepts.

The Syphon Filter series started out extremely strong, and it quickly went downhill from there. The original game was a solid third-person shooter with an interesting, if unoriginal premise. You, as super secret agent, Gabe Logan, were out to get to the bottom of an international conspiracy surrounding a deadly virus known as Syphon Filter. Two increasingly weak PlayStation sequels were released, and the series seemed to fade back into obscurity. Now, after a couple years off, Syphon Filter is back in the form of an online-focused game, The Omega Strain. This new Syphon Filter game sticks to the basics of the previous games, but even in the attempt to make the game online-friendly, a collection of small annoyances add up to make this new Syphon Filter a letdown.

In The Omega Strain, you won't play as series hero Gabe Logan or any of his allies that you've seen in previous games. Instead, you'll be a no-name recruit working for Gabe Logan's secret antiterrorist organization, the IPCA. The game opens with you creating a character using a fairly rudimentary set of features, and from there you're ordered into training and then eventually you're sent into the field.

The game contains 17 different missions that take you from a mysterious virus outbreak in Michigan to faraway locales like Yemen and Japan. Each mission gives you a sizable chunk of gameplay. Levels are typically pretty large and throw a lot of different objectives at you, both at the start and as you proceed. The first mission is a perfect example of how this works. You'll start out just trying to find some water and tissue samples from the scene of an outbreak, and you'll also be trying to assist local authorities in stopping a never-ending onslaught of terrorist troops. But as that mission unfolds, you'll try to upload sample data, protect a generator from attack, and eventually take out the leader of the local terrorist threat. Other missions expand in a similar fashion, making each one pretty lengthy.

Online, the game really doesn't change much. You connect and you're basically presented with the same mission-select screen that you get in the single-player mode. You even use the same created agent. The difference is that selecting a mission instead lets you join a group of up to four agents to take on the mission together. Some missions are online-specific, and others get easier. For example, you'll have to learn the level and take the exact, proper path to a handful of spaces around the map to collect vials of the Syphon Filter virus when you only have five minutes to do so. But in a group of four, it's as simple as getting on the headset and figuring out who is going where. However, there really isn't much incentive to work together in many of the missions, which makes splitting up and working on different objectives a more effective tactic when it comes to getting the job done quickly. At the end of a mission, you'll earn commendations based on your performance, and then you'll drop back to the mission-select menu to find another game.

On paper, Syphon Filter sounds like a cool idea and, much like Resident Evil: Outbreak's recent attempt, it's a potentially interesting way to make multiplayer activity more meaningful. But lots of little things add up to drop a wet blanket over the whole experience. For starters, ammo is pretty scarce in some missions, meaning you'll have to switch back and forth between your pistol and a variety of primary weapons, such as a combat shotgun, FAMAS, and so on. Even though the game offers multiple ways to change weapons, none of them are fast and easy enough to pull off in the middle of a firefight, leaving you rolling around like a maniac as you try to dodge bullets while you get the weapons to change. In many cases, enemies respawn at a very rapid rate, which, on one hand means you'll always have plenty to shoot at, but it also means that you'll never really be able to clear an area out for long. The game does have a map, but like most 3D maps, it's difficult to get a bearing on where you are in relation to your objective's location. On top of that, the action doesn't pause when you check your map, making it impossible to use when time is of the essence.

Combat in the game is handled either by locking on to your targets with the R1 button or dropping into a first-person manual aim mode with L1. Headshots are one-hit kills, making manual aim a much more attractive proposition than the decidedly poor lock-on aiming ability. Even up close, most enemies will gladly take four or five rounds from your pistol before giving up the ghost. Getting good at shooting people in the face doesn't take long and it certainly saves ammo, making it the preferred route.

Syphon Filter is broadband-only, and online it runs pretty well. You typically won't see other players skipping around or lagging out; however, we ran into a bug or two online. The most disappointing instance was where your gun stops making noise when you fire it, and for some reason, enemies stop firing on you until you shoot them first. This means you can just run right past herds of opposing forces and get to your final objective much quicker.

Graphically, Syphon Filter is a game that screams out for a progressive scan television. Not because the game's 480p support makes it look that much better, but because the game looks super shimmery in the standard, interlaced mode. Text almost appears to vibrate onscreen in the standard mode, making things like mission briefings real eye-burners. Beyond that, the game's models look OK and the environments are at least large, even though they aren't terribly pretty. The game's animation feels like much of it was taken directly from the previous Syphon Filter games, such as the trademark way that your hips and torso swivel when you're strafing. That said, the game's animation is decent.

On the features side of things, Syphon Filter was announced as a game that was supposed to include support for Sony's recently released hard drive, allowing for downloadable content. That feature is missing from the shipping version of The Omega Strain.

On the sound side of things, the game has pretty decent music, and the gunfire and other sound effects are usually right on. But a lot of this is overpowered by constant, repetitive radio chatter. It's a real drag to hear your superior drone on over and over again about how you're moving too slow, or that you aren't fast enough, or that you could be getting the job done more quickly. OK, we get it. Pick up the pace.

When you add it all up, Syphon Filter: The Omega Strain is a disappointing package that clocks in much closer to the other Syphon Filter sequels instead of standing up to the fantastic original game. The ideas behind making the online and offline games so similar are interesting ones, but in the end, the game itself isn't interesting enough to live up to the concepts. If you're a serious fan of cooperative online gaming, you may want to rent The Omega Strain. But for most players, a three-day rental is all you'll need to see everything--good and bad--that the game has to offer. 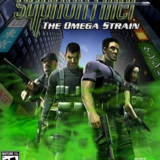