The first portable Syphon Filter is of a rare breed for the PSP--a shooter that offers not only intense stealth and action sequences, but also controls that work.

The original Syphon Filter for the PlayStation made quite a splash with its blend of third-person stealth and shooting action. Unfortunately, subsequent games in the series failed to live up to the promise of the original game, with the most recent version on the PlayStation 2 being especially disappointing. That's why it came as a pleasant surprise that the newest version of the game, Syphon Filter: Dark Mirror for the PSP, turned out as well as it did.

In Dark Mirror, you'll reprise the role of superspy Gabe Logan as you investigate the mysterious attacks on chemical plants by a terrorist organization. The adventure starts off at a base in the chilly tundra of Alaska, but as the convoluted plot unravels, you'll discover the usual fare you'd expect from a techno-thriller. There's secret-weapons development based off genetic-engineering experiments, double-crossing, and even a visit with an old flame of Gabe's. The story isn't all that great, but the way in which the game presents it is simply amazing for the PSP.

Throughout the game's seven-mission campaign, there's a near-constant stream of speech as Gabe coordinates his operations with his partner, Lian Xing, and handler, Teresa, back at the base. There are also a ton of in-engine cutscenes, complete with lip-synched characters, which help move the plot along and point you toward your next objective. The writing in Dark Mirror does get hackneyed at times, but it's in a cheesy, Arnold Schwarzenegger-movie way that's liable to amuse you rather than irritate you--"I'll see you in hell, Gabe!" "Not if I see you first!" No matter how you feel about the story, you can't help but feel impressed with the way it's presented in the game--the production values in Dark Mirror are greater than that of most PS2 or Xbox action games. In other words, this is the kind of thorough treatment you'd expect from something like Grand Theft Auto.

Dark Mirror isn't all about the movie-like presentation, though. As a superspy, Gabe's got quite a variety of moves, weapons, and gadgets at his disposal, and you'll use all of his tricks as you make your way through the game's campaign. Since the game combines stealth and action, you've got a useful radar display that you can use to help you get the jump on enemies. There's also an array of different vision modes, including low-light night vision, thermal imaging for finding bad guys, and another special, "EDSU" mode that you can use to help you find switches and other interactive objects in the environment. It's also great for showing you dangers, such as laser trip mines.

The sneaking and shooting is enhanced by Gabe's ability to stick his back up against the wall and peek discreetly around corners and over low walls. From here, Syphon Filter takes a page from such games as kill.switch by giving you the ability to aim around the corner while under cover and immediately pop out to shoot. Aiming is done with the four face buttons, while moving is done with the analog stick. This gives you the ability to quickly squeeze off a shot or a burst and immediately pop back under cover. Nothing's quite as satisfying as swinging around a corner and nailing an enemy in the head for an instant, silent kill.

While the moving and aiming scheme sounds pretty standard, the control is not as awkward in Syphon Filter as it is in most other shooter games on the PSP. Scoped weapons can be zoomed in by holding the left shoulder button. If your weapon doesn't have a scope, you can lock on to any enemy in view by holding down the left shoulder button. The available lock-on gives you a nice compromise between precision and speed as you play the game. The controls aren't perfect, though, as you'll still feel flustered at times when the aggressive artificial intelligence charges you and you flail about trying to attack them at point-blank range. There are also times when we struggled to get Gabe to stick to a wall. But this is still easily the best control scheme for a shooter we've ever experienced on the PSP, besting even SOCOM in that aspect.

There are a number of cool gadgets at your disposal, aside from your goggles with the special-vision modes. You'll be able to zipline from one ledge to another wherever there's an overhead wire. You'll even be able to shoot with a pistol or submachine gun while on the zipline, but, unfortunately, you're never given the opportunity to shoot your own zipline. Your sniper rifle has a number of different rounds. Standard bullets are available, along with gas and explosive darts that can knock out multiple enemies standing close together. An electric dart can silently kill a single bad guy.

Dark Mirror's campaign only lasts about seven or eight hours, but the action is both dense and intense, and the game is paced extremely well with the help of a lot of checkpoints, quick loading times after deaths, and a friendly amount of health packs and body armor pickups. You'll travel to locales ranging from the frozen base in Alaska to the jungles of South America, as well as various strongholds scattered throughout Europe. Most of the missions have you sneaking and shooting your way through the bases, but the type of action you'll see is satisfyingly varied. In some portions, you'll be providing cover to your partner Lian or another computer-controlled character with your sniper rifle or a stationary machine gun. Other parts of the game have you searching for hidden elements in a room or trying to pilfer data from a computer. You'll infiltrate the casino of a crime boss, for example, and try to recover listening devices planted in there, and then use their own computers to upload the data back to your headquarters. Several portions of the game have you racing against the clock to rescue civilians or other prisoners. You'll even take on a tank while armed with a rocket launcher.

The balance between sneaking and shooting is good and, for the most part, entirely up to you. If you're inclined to sneaking, you'll have ample opportunity to creep around, get behind unsuspecting enemies, and then snap their necks, pistol whip them, or put a silenced round into their skulls. The game rewards you for going stealth by reducing the number of enemies you face and sometimes even giving you alternate paths through the level that are easier, if you are especially sneaky and pick up key codes. However, if you prefer to just go guns blazing the whole time, you can do that too. You'll just trip the alarm and have to take down more baddies, but because you can always pick up their weapons, you should never run out of bullets. The amount of checkpoints and health, armor, and ammo pickups is on the generous side, possibly tending toward making the game a bit easy. But there's still a satisfying level of challenge in the game, and you're not liable to ever get frustrated.

Your performance in the single-player game, including your play style and the hidden pickups you find, helps unlock additional weapons and abilities for multiplayer action, such as new shotguns, extra health, larger ammo reservoirs, and even the ability to dual wield. You can always check your progress on unlocking the items in the menu, but unfortunately, the game isn't all that specific about what exactly you need to be doing to unlock a specific gun or ability. There are also five bonus missions you can unlock after beating the game, which give additional value and let you play as other characters from previous Syphon Filter games, such as Stone--but these aren't quite as involved as the story missions.

Syphon Filter's multiplayer modes allow up to eight players over adhoc or online through infrastructure mode. The features available online include leaderboards, buddy lists, a server browser, and the ability to create clans or "cells" as they're called in the game. It's also interesting that the game includes support for voice chat for those who have a PSP headset/mic unit. Your game options are pretty robust as you can set frag limits, time limits and whether to turn target locking on or off (it's off by default). The game modes are pretty standard fare, including objective-based games, deathmatch, and a "rogue agent" mode, where only the player carrying the rogue agent kit can score points with kills, but unfortunately there are only five maps available. The online play is pretty smooth and the objective-based maps can be interesting, but with only five maps, things might get stale quickly. The maps are at least quite large, so it shouldn't feel too crowded if you get a full eight-player game going.

We already mentioned how good the game looks from a presentation standpoint, but Syphon Filter is easily as impressive to look at in-game as it is during the cutscenes. Environments and levels show a lot of detail, as do the character models, which bristle with pouches and other accoutrements on the uniforms. Gabe's guns are always visible on his person, and you'll see him unsling and resling guns from his back as you swap weapons. There are other nice little touches too, such as the way the barrel of your gun lets out a little wisp of smoke when you return to cover after firing a few bursts around a corner, or the way bodies light on fire when they die from a nearby explosion. The frame rate holds up very well throughout the game, and there's little to no frame-rate hitching, even when there's a lot of action going on. It wouldn't be an exaggeration to say that Dark Mirror looks better than some similar games on the PS2.

The music in the game is as impressive as the volume of voice acting. The sound engineers did a great job with the way dynamic music spools up during gun fights and calms down once they're over. Our only complaint here is that the guns sound really weak and limp, which is more noticeable of a letdown given the great job done in all the other aspects of Dark Mirror's sound design. All things considered though, we still have to say it's a great-sounding game.

With everything Dark Mirror has to offer, including its great controls, varied campaign, and high-caliber presentation, Syphon Filter is easy to recommend to anyone who likes action games. The stealth in the game isn't as hardcore as something like Thief or Metal Gear Solid, but it's also not forced on you either, so fans of both sneaking and shooting can play Dark Mirror however they wish. Our biggest complaints are with the relatively brief campaign and some hiccups in the sound design, but with the available eight-player online multiplayer modes, we can't complain much about the value. Dark Mirror is easily one of the most surprisingly great games we've played in a while, if not an outright early contender for PSP Game of the Year. 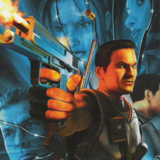