Sword of the Berserk is the best Final Fight-type game to appear in ages.

When you think of the most recent attempts at bringing Final Fight's 2D gameplay to the 3D realm, you probably think of games like Dynamite Cop, Zombie Revenge, and Fighting Force. You'd be forgiven if you think those games get really boring fast, because they do. Well, Eidos and developer Yuke's (Evil Zone, WWF SmackDown!, and Soukaigi) have joined forces and taken one of Japan's most popular mangas, Kentauro Miura's Berserk, and turned it into the bloodiest hack 'n' slasher yet. Renamed Sword of the Berserk: Guts' Rage for the US, Eidos, surprisingly has picked up the game for American distribution.

Guts, the poorly-named main character, typically wields a massive sword nearly one and a half times his own body length, and as the game's title indicates, Guts has a tendency to go berserk once he has suffered enough damage during battle. At the moment he goes berserk, the screen turns blood red, and Guts' speed and power double. Guts is a one-eyed knight traveling through Europe during the Middle Ages. He is identifiable by his one working eye and a dark brand on his neck, which attracts the weird and varied creatures he continuously battles. When creatures are close at hand, the strange mark bleeds, giving Guts warning of impending danger.

The game begins with a scenario, rendered by the game's impressive engine, where some of the game's main characters are introduced beside their broken caravan. They are suddenly attacked by highwaymen looking for trouble, and that's when Guts enters the scene. You'll figure out the controls in no time flat. Aside from swinging your giant sword, you can jump, block, and even sheath your sword in favor of a wrist-sized crossbow.

You also have a limited supply of items that you can access by pressing the right trigger button and any of the corresponding four colored controller buttons. The items you can use are grenades, a small gun, health refills, and throwing knives. While these items are extremely limited, you can find them in the many boxes and barrels placed around the game environments. Once acclimated to the controls, you'll find that Sword of the Berserk is a straightforward hack 'n' slash action game where you rely on little more than your basest survival instincts. Chop the enemy to bits and try not to get chopped yourself. That's it. You are amidst an endless swarm of soldiers, monsters, and mutated thingamajigs, and your singular goal is to hack, hack, hack your way through the assembled masses. When you're not hacking these guys to bits, you're engaging in fisticuffs or blowing the attackers to tiny pieces with your grenades. Musket shots are best reserved for the bosses, since ammo is in limited supply. Unlike recent Final Fight-style games like Dynamite Cop, Zombie Revenge, and Fighting Force 2, Berserk doesn't ever get nearly as tedious. In Berserk, you'll run from level to level through a gamut of alleys, mountainsides, and villages. While some areas are wide open, others are restricted to tight spaces, which will cause your sword to clang off the walls. While you're in berserker mode, this doesn't affect you, but any other time this can be very difficult, especially with lots of enemies around you. When this happens, resorting to your fists is the best choice, as it's much easier to make contact this way. If you're cornered, a grenade will always clear everyone in the immediate area out like a smart bomb.

You'll meet bosses in unique encounters, and each will require a different strategy. One boss, for example, is a huge, man-bull creature with one enormous horn protruding from his head. This is one of the hardest bosses to defeat in the game because his patterns aren't as predictable as some of the others, and he is possibly the most mobile. You'll need to use every attack you know to beat him on the harder difficulty levels.

What also makes this game significantly more engrossing than Dynamite Cop or its ilk is the sound. This is one of the most impressive-sounding games ever made. From the first time you hear the sound of your sword cutting through the air, you'll be amazed. The meaty crunch of steel hitting flesh is made more realistic by the appropriate thud. The simple act of listening to Guts walk is rewarded with the crunch of dirt and sticks, and the jangle of his chains is also very impressive. Ambient sounds like footsteps and voices in dank stairwells resound with accurate reverb and echo. The voice-acting is filled with aural clarity, and the soundtrack is an amazing blend of ominous compositions. The problems this game suffers from are not unique, nor are they necessarily solved in any manner here. The problem is that the camera can often be too close to the main character, making for a consistently dramatic-looking game but hampering gameplay at some points. The closeness of the camera doesn't affect things too much in wide-open areas, but when you're fighting in tight alleys or are being hounded by a particularly malicious boss, it is sometimes impossible to see what you're doing, due in part to Guts's huge cape. If the camera were pulled back a bit or tilted to an overhead perspective at some junctions, the game would be less problematic. It is also hard to target and kill some of the smaller enemies in the game, despite the vertical and horizontal nature of your attacks. In some stages, little turnip babies (don't ask) and frogmen attack you, and dropping your grenades is often the best strategy.

When you're between levels, the game is chock full of cut-scenes rendered by the sturdy engine. These sequences are long and can be skipped, but they add a lot to the game, and they're worth watching the first time through.

The graphics are stunning. Although things seem a little too gray and brown at times, these colors are appropriate to the heavy atmosphere that the game's storyline seeks to convey. Characters are extremely well modeled, often having a Virtua Fighter 3 level of quality to them. Monsters have been given less thought than Guts himself, but that's expected considering their disposable nature. The animations are also well done, especially the main character's sword work. It's even cool how he slides to a halt when you abruptly change directions. While the characters are impressive enough, the detail of the backdrops is even more amazing. Everything is modeled in 3D, and the attention paid to texture detail and environment modeling rivals Sonic Adventure. Stone blocks look like stone blocks. Furniture, torture devices, straw mats - everything has been painstakingly constructed, and to great effect. Again, the only element that ever detracts from all this beauty are the funky camera angles. It should also be mentioned that the amount of bloodletting in this game makes Mortal Kombat look like a Teletubbies episode. With each successful strike, Guts send pints of the stuff flying around on walls, floors, other enemies, etc. Surprisingly, the US version of Berserk not only doesn't reduce the amount of blood shed, it increases it by 30 percent. Apparently the boys at Eidos thought this would be a good change, but in the end, it really doesn't affect much at all.

Replay value is enhanced by a prize box that unlocks items (a la Panzer Dragoon Zwei) as you beat the game on its various difficulty settings. The harder levels are really challenging, so it will be awhile before you unlock the extra secrets in the game. Fortunately, Eidos and Yuke's have done away with the extra-easy and extra-hard levels in the game, allowing you to unlock the game's secrets by beating easy, normal and hard modes. Thankfully, this means that the minigames, stage select, artwork, movies, and other amusing items can be had more easily. While the complete lack of a multiplayer mode makes this a completely solitary experience, it is still an exciting way to mow down the masses. The import version had some excellent voicework, and so does the US version. Eidos sicced the same team that handled the vocal chores in Soul Reaver on Sword of the Berserk, and it shows. Recorded in mere weeks, the acting in SotB is better than any Resident Evil title thus far. Sadly, no improvements were made to the funky camera issues or wanky collision-detection in the game. The only improvements were aesthetic, although it must be said that those improvements were handled well. As it stands, this is the Dreamcast's best hack 'n' slasher to date and one of Yuke's finest efforts. Although it has limited gameplay and it is meant to appeal to a niche, hard-core audience, Berserk is a white-knuckle experience that keeps your finger on the attack button. More than a mere rental, Sword of the Berserk is the best Final Fight-type game to appear in ages. 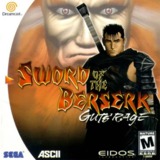