Gnarly deaths and cute aliens make for a fun combo in this challenging action game.

Considering the objective of most games is to keep the main characters alive, it's rather entertaining when one comes along that makes intentional death an integral element of the gameplay. While Swarm is a clever action platformer that revolves around sacrificing the few for the good of the many, it takes things a step further by actually rewarding you for killing off the adorable alien protagonists in inventive ways. The bulk of the poor little blue fellows wind up burnt, skewered, asphyxiated, dismembered, and vaporized so that a few of their lucky brethren can make it to the end of each obstacle-filled stage alive with the highest score multiplier possible. Maneuvering a gaggle of 50 little critters through a gauntlet of doom is messy business. It's a premise that yields both fun and frustration, but the punishment isn't always unwelcome.

The peculiar blend of morbid and charming action fires up when a giant blue alien organism crashes onto the surface of a mysterious world, extends a vile tentacle orifice, and belches out a gaggle of 50 little swarmites. Controlling all of these squirming buggers at once, you head off into imminent peril to collect DNA to feed "Mama" and make her grow big and strong. Your task is to get as much of your swarm safely to the end of each stage as possible while collecting DNA strands along the way. That's not easy because every level is bristling with spikes, saws, pits, explosives, unfriendly creatures, fire, lasers, and other traps designed to whittle down your brood. As long as there's at least one alien left in your group, fallen comrades can be replenished at sporadic swarmite generator stations that are found at strategic spots along the path, but the long stretches in between present numerous opportunities to perish.

Making it to the finish line alive and being reabsorbed by your pulsing parental blob isn't sufficient on its own; you have to rack up a high enough score to unlock subsequent stages, which is where Swarm's challenge quickly ramps up. Collecting glowing orbs littered around each course boosts your score, but the multiplier resets if you wait too long in between orbs. While grabbing more orbs before the multiplier meter runs out keeps the chain going, you can also do so by intentionally killing off a few of your swarmites. This creates a precarious balance that has to be maintained because losing too many swarmites can be just as catastrophic as playing too cautiously. It also forces you to keep moving even when the action and danger build to a crescendo. Without the multiplier, it's impossible to unlock a new stage using the limited orbs available because dying in the middle of a killer run often means having to restart a level from scratch. This can be particularly infuriating when it happens a dozen times in a row, and harder levels will really test your patience. Though the going is often tough, retrying levels again and again until you've mastered the tricks needed to overcome them does become addictive.

Despite their tiny girth and large numbers, the swarmites are resourceful creatures capable of performing a few helpful tricks to overcome obstacles and aid in their survival. Holding the L2 button makes the swarm scatter into a larger formation that's useful for collecting orbs. Holding R2 makes them huddle, and releasing it gives the group a short burst of speed. This is crucial for getting a running start to launch the gang across gaps and over certain traps. When huddled, they can also charge into objects and smash them or climb on top of one another to form a moveable tower. By tapping the circle button, the group can grab objects like explosives or light bulbs and interact with them as well. Altogether, there are a lot of maneuvers to memorize, and it takes some practice to be able to pull them off when you're charging through a level at high speed.

Swarm's high replay value and hefty difficulty stretch the adventure out a little further. Online leaderboards for each stage show your score ranking, and there's some value in returning to previously beaten stages to push for a mega high score and collect any leftover DNA you missed. Then, there are the silly death medals to work for, which are comical awards doled out for killing off your swarmites in different ways as you play.

With only 10 main levels and two wild boss battles, it only takes a few hours to plow through most of what Swarm's harsh alien realm has to offer in return for your $14.99. The insidious environments are creatively designed for maximum sadistic potential, and the stark visual contrast between the playful blue swarmites and the twisted, dark world they're barreling through gives the game a fun, warped vibe. The unforgiving level of challenge found woven throughout the game's most brutal stretches is a turnoff at times, but Swarm still manages to win you over with its dynamic gameplay and the humorous way it delivers on its twisted concept. 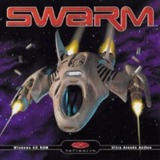