This one says "rental" all over it.

If you dig all the racing games already released for the Dreamcast, but you really jones for a two-wheeled rice-rocket racer, then fortunately for you, Suzuki Alstare Extreme Racing has hit the pavement and is ready for some serious knee-draggin'. The game was originally released in Japan as Redline Racer, but Criterion (makers of Acclaim's Trickstyle) and Ubi Soft, have given the game a graphic upgrade and have added an official Suzuki license. This should come as great news for those who didn't quite dig Redline Racing so much, due to its "extreme" blandness. Instead of picking a nondescript racer and slapping him on a nondescript motorcycle, now you can take control of a few of the most dominant motorcycles to hit Laguna Seca over the last few years: the Suzuki GSX-R750 and the GSX-R600.

The game structure will be familiar to anyone who has played Sega Rally. It's similar to Sega Rally in that you slowly access additional tracks by beating sets of races, three at a time, with the goal of having the most points by the end of the third race. The tracks themselves vary from cavernous valleys (remarkably similar to Manx TT's opening track) to desert settings and snow-covered courses. However, the ambitious layout of some tracks may prove too much for less-accomplished gamers. While the game doesn't feel nearly as twitchy as most motorcycle racing games, the analog control is almost too unresponsive to be of any use on some tracks - the analog action might feel great on some of the wide-open tracks but feels too sluggish for the more serpentine courses, unless, of course, you're willing to crawl around the tracks with the brakes on half the time. If you don't subscribe to this method, good luck navigating the track - and the curb. Your motorcycle will drive up the side of a mountain before spilling you far off in the distance (Road Rash style). Considering the difficulty controlling your bike in the hairpins, it is unreasonable that the tracks cause you to fly off your cycle so often. Thankfully, you get back on the seat of your motorcycle much quicker in the US version than you did when the game was called Redline Racer. If hurtling into corners with reckless abandon isn't enough of a blast for you, there is also a nitro button to give you a Moto Racer-style speed boost, but you won't find many places to apply this feature, as the straightaways are few and far between. Hit the nitro button in a curvy spot, and that pretty much guarantees you'll smear yourself all over the street.

That's not to say it's a bad game. The graphics are solid enough, with nice light sourcing (the horrible headlight effects being the exception), good-looking tracks, and not too much pop-up (although some tracks can be awfully dark). The wheels and other objects can be a little blocky, but otherwise, the visuals look a lot like Moto Racer, with an obviously higher polygon count and less pixelation. The frame rate also maintains a consistent 30fps, and the riders themselves have numerous animations, which are evident when you lean into corners, bump into other riders, or hit the nitro button. The distinctly bad sound effects of the Japanese version have been replaced with authentic sounds sampled from Suzuki's actual motorcycles, adding a real-world sensation that Redline Racer didn't achieve. There are seven tracks for you to conquer in 12 racing circuits. Split-screen racing is competent, if uninspiring, but if you have a friend wanting to play, you can both get it on.

While Suzuki Alstare Extreme Racing is a distinct improvement over its imported version, it is still a "B" title. The biggest problem is that it never really feels all that "extreme." It feels as if the original game has been given a talk show-style makeover, albeit a very nice one. While this might have passed as OK on the PC, it is merely average on a console where mediocre racers are commonplace. Suzuki Alstare Extreme Racing is a decent racing game but not nearly as good as Ubi Soft's other racer, Speed Devils. While the license and sense of identity are certainly appreciated, next time it would be better to concentrate on the game itself. The mind wanders, instead, to a perfect port of AM3's Manx TT or even Sega's Road Rash-esque Motor Raid. This one says "rental" all over it. 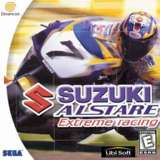