Hanging 10 in this movie-licensed surfing game has its moments--just don't expect to enjoy it for very long.

Thank god for the occasional bucked trend. Surf's Up could very easily have been yet another lamely produced platformer or action adventure game based on an animated film. Instead, it's an oddly competent surfing game. The game eschews any attempts at retelling the film's story, and is instead content to act purely as a companion piece, letting you play as all the key characters from the film in a game that feels like a combo of Kelly Slater and Wave Race for kids. It's not a remarkable game, but at times it can be a decent bit of fun. It's just a shame that it offers so little in terms of content.

Jumping into a game of Surf's Up is a little off-putting at first. Your chosen surfer essentially travels through the level on rails, and it's up to you to guide him or her past the various obstacles that litter the game's courses. All along the way, a constant wave moves along with you, and you can use this wave to perform tricks. The trick system is rudimentary, only tasking you with moving up the wave until you get to the peak, then jumping off by hitting one of the trick buttons. While you're in the air, you can do one of several different trick types, from grab tricks to special tricks that can only be performed once you've built up a special trick meter. This meter is also tied to speed boosts, which you can use to power past certain obstacles or opponent surfers.

As you go, you'll also be trying to pass through various gates, collect power-ups, grind on various rails, and occasionally go crashing through stuff. All these tricks net you points, and the goal of most levels is to hit a certain point target. There are actually two point targets in each stage, but you only have to hit the first to progress.

The trick system works fairly well, and the controls are solid. The Wii version is the only one that deviates from the standard control scheme, but it doesn't go overboard with motion controls. The only motion you use in the game is to swing the Wii Remote downward to engage a speed boost. However, the one caveat is that the Wii version is also missing a trick type, seemingly because of the controller's lack of buttons compared with all the other console versions. The Wii version doesn't necessarily suffer because of this, as it's pretty easy to hit the score targets without this trick type, but it does come off as lazy that no effort was made to keep the missing trick in the game.

If there's any real complaint to be lobbied against the gameplay on all versions, it's that it's occasionally bewildering. The tricks and other mechanics are quite simplistic, but getting your surfer to engage in certain actions--rail sliding, for instance--is an inconsistent process. The game is unpredictable with when it wants to magnetize you toward a rail to slide or have you miss it altogether. You also may end up wrecking into a few more rocks or other immovable objects than you'd prefer due to character movement not being quick enough or the sometimes-wonky physics pushing you toward an object even though you were turning in the opposite direction. These issues don't really make the game frustrating, as the difficulty is easy enough to where even crashing on a regular basis doesn't detract from you passing a level. They're just kind of annoying.

The other issue of note with Surf's Up is that there's just nothing to it. The game's primary mode is the championship mode, where you move from level to level, hitting the score targets and eventually taking on the big kahuna of surfing, Tank, in the last stage. However, besting the championship mode doesn't take more than an hour and a half the first time through. Granted, you won't collect all the various idols and other hidden doodads in one play, but it's hard to imagine anyone taking more than three or four hours to pull that off. Beyond this mode, there's a basic multiplayer mode that's for two players on the Wii and PlayStation 2 and four players on the Xbox 360 and PlayStation 3. It's not online, and the number of maps you can race on is limited, but it's there. Finally, there's a lame side game called Leaf Sliding, where you're lugging a big leaf down one of three down-sloping courses. This mode is mildly amusing once, but that's about it.

The game does at least have some decent presentational values backing it up. The graphics aren't stellar, but the characters look good, the water moves nicely, and some of the trick animations are pretty cool. Other animations look stiff and glitchy, but not horrifically so. Of course, the 360 and PS3 versions look significantly better than the Wii and PS2 versions, but for its hardware capabilities, the Wii version actually looks quite good, too. The PS2 version is another story. The frame rate is much choppier in that version, and all the neat little visual effects on the water and environments are pretty much absent, making it look a lot blander than the other versions. The game's audio is decent, mostly because some of the actors from the film reprise their roles here, albeit in an extremely limited fashion. Most of the dialogue comes from little news blips that act as surf reports before each stage, and though most of the jokes are pretty dumb, the voice acting isn't half bad. Less entertaining is the soundtrack, which is mostly generic rock, including some exceedingly generic songs from bands like Simple Plan and Homegrown.

Surf's Up deserves a bit of credit for turning in something that isn't just a cakewalk action platformer that does a lousy job of retelling the film's story. Sure, it would have been nice if the developers had included any story to speak of, but from a gameplay perspective, the surfing-on-rails mechanic works better than you'd expect and provides periodic moments of legitimate fun. It won't appeal much to older players, and regardless of which platform you pick it up on, it's not worth its overly expensive price tag, given the barren amount of content the game offers up. But for younger kids who dug the movie, you'll get everything you need out of Surf's Up over the course of a rental period. 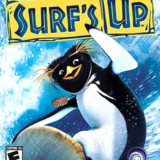