In the end, Superman: Shadow of Apokolips is just an average action game.

He's faster than a speeding bullet, able to leap tall buildings in a single bound, and can be trapped in walls because of poor collision detection: He's Superman! And yes, he doesn't seem all that super at times in his new action adventure game for the GameCube, Shadow of Apokolips. These sorts of technical problems not only inhibit Superman's inherent abilities, but they also make the game much more difficult than it already is, and you'll soon notice that every enemy, from the robot foot soldiers to the boss characters, can inflict surprising amounts of damage upon the man of steel.

In truth, there's some justification for why most of the enemies in the game are so tough. The notorious villain Lex Luthor has concocted a plan with another one of Superman's adversaries, Darkseid, who supplies Luthor and an army of robots with weapons that pack a little more punch than Superman may be used to. The storyline in the game is worthy of the cartoon series that it's directly based on, and as the plot unfolds, Superman will have to face even stronger foes, most of which require a little thinking to defeat. But in some cases Superman's brute strength and heat vision alone will get the job done.

In fact, you'll be using Superman's laser eyes as your primary weapon throughout most of the game. Though he can blow great gusts of wind, throw enemies across great distances, and plow into objects at high speed from any distance or elevation, these abilities become less and less useful as the game goes on and as the enemies become more difficult. The great burst of energy from Superman's eyes can take out most robots with just one or two shots, and if there are other enemies in the vicinity of the blast, they'll sustain some damage as well. The lock-on system that Superman uses to target specific enemies works relatively well, except when there's an abundance of objects, such as boxes or pipes, in the environment. In these cases, Superman has trouble telling his foes apart from inanimate objects. For example, when you want to fire at an enemy, the lock-on system may automatically target a box or another similar bit of scenery instead--it can take a few slight movements to get into a position where you'll actually lock on to an enemy.

For what it's worth, the developers more than likely recognized how overwhelmingly effective the heat blast is, so they tried to limit it by giving Superman a special ability meter that drains every time you use one of his superhuman powers and then gradually recharges. Some missions require you to act quickly, so you can't simply wait for it to recharge and might have to resort to other types of attacks. But in most cases there's usually time to wait several seconds in between battles so you can launch another heat-vision barrage at the next set of enemies.

Ultimately, the game gets pretty stale after a while, as you get caught in the pattern of shooting, waiting, and then shooting some more, then waiting some more. It can even become so frustratingly boring that you'll want to quit flying and run right up close and start using Superman's fists instead of waiting for the special meter to recharge. But even then, you'll soon be forced to flee so Superman's health can recharge. This is especially the case with the game's various boss battles. Interestingly, some of the bosses can be defeated through alternative means, which you can discover by exploring the environment. These alternatives can be incredibly difficult to pull off, but rightfully so, since they can rob boss characters of all their health rather quickly. You'll notice that the AI tends to cheat a little once it sees that you're in a position to instantly defeat it.

While there's some variety to the boss fights, most missions in Shadow of Apokolips aren't noteworthy. Many of Superman's objectives entail retrieving an object, performing some action within a given amount of time, or just simply destroying every enemy in sight. There are a few interesting moments here and there, particularly when you have to infiltrate Lex Luthor's laboratory while disguised as the unassuming Clark Kent or when you're soaring between the massive skyscrapers in Metropolis, but these missions are in the minority. Many of the other missions have little to distinguish them.

Perhaps the game's biggest problems relate directly to collision detection. When trying to navigate in close quarters, Superman can simply get stuck in the walls or the ground, and unfortunately there's no way to pry him loose other than to press the reset button. Also, when flying around in a tunnel-like area, if you happen to bounce into a wall, the game seems to have trouble reorienting the third-person perspective, so it can be difficult to figure out where exactly you are in relation to the rest of the level and whether or not you're flying up or down. As you can imagine, this is especially problematic in the missions that require you to complete the objective in a certain amount of time.

There are a few things that Superman: Shadow of Apokolips does quite well. All the levels in the game, even the indoor ones, are quite large and give you enough room to freely maneuver Superman in just about any direction--it wouldn't be much of a Superman game if he were grounded most of the time. Unfortunately, the best level in the game, and perhaps the most technically impressive of them all, is very short. Still, some of the other levels are quite impressive.

Graphically, the game mirrors the high-quality style of the animated series. All the character models look nearly identical to their TV counterparts, even though they're constructed with polygons. In addition, Superman animates incredibly well, and fans will probably get a kick out of seeing some of his mannerisms, such as when he gracefully shifts his arm up and down while turning through the air. And yet while most of the levels in the game are massive, they are generally lacking in secondary details--you won't see much more than crates and other warehouse objects dotting the landscape. In addition, there really isn't much in the way of texture detail in the game, since it's supposed to retain a cartoon look. But on objects like tanks, cars, and buildings, the lack of texturing is really noticeable, and it makes those objects look quite poor. In addition, the game produces a really odd color blending effect, similar to that of poor-quality full-motion video, whenever you use his turbo capabilities. It really detracts from the otherwise clean look of the game.

For the most part, the sound in the game is very well done. All the voice actors from the cartoon have lent their talents to the game, and they all give good performances during the cutscenes. Superman will also chat it up with other characters during boss fights, though the characters tend to repeat the same lines a little too often. The soundtrack has tunes that are similar to those from the cartoon, but it's surprisingly subdued throughout most of the game and seems to serve more of an ambient role.

In the end, Superman: Shadow of Apokolips is just an average action game. Even if some of the technical problems had been resolved before the game was finished, that wouldn't have made the majority of the missions in the game less boring. The game is also quite short--it will only take you a little under four hours, if that, to complete the game, and most of that time will be spent retrying levels because of the somewhat high difficulty level. Still, fans of the cartoon will probably get a kick out of being able to play as the highly stylized version of Superman seen in the cartoons, soaring through the air as only Superman can. 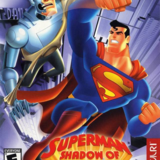 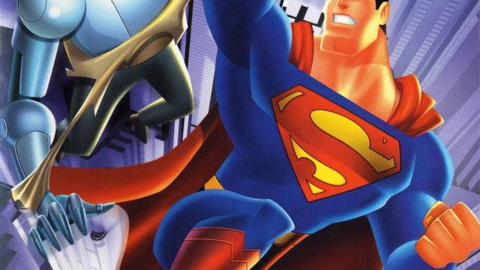 In the end, Superman: Shadow of Apokolips is just an average action game.