It serves no purpose other than to firmly establish the bottom of the barrel.

Since his creation back in 1938, the Man of Steel has faced such challenges as Richard Pryor, the Anti-Monitor, marriage, the reworking of his origin, and even death. Heck, back in the old days, he used to kick the bucket about every other issue. But never in the course of all those years has such a threat appeared to dog his name and reputation as much as Titus' Superman game for the N64.

Lex Luthor has trapped Superman's friends Lois, Professor Hamilton, and Jimmy Olsen in a "virtual world," and you, as Superman, must enter it to rescue them. Also populating this realm are the villains Braniac, Darkseid, Bizarro, Metallo, several other bad folks from the animated series, and an endless array of shadowy drone characters. Sure, it's pretty slim on premise, but that in and of itself isn't a bad thing. Many titles have provided quality gameplay with only a paper-thin story supporting them. Superman, however, isn't one of them, and the game that follows is one of the weakest ever, even in the dubious category known as "licensed games."

The gameplay alternates between standard 3D adventure fare and timed mission objectives. The 3D adventure elements include collecting keys to open doors, beating up enemies, and pushing buttons in the proper order shortly after receiving instructions as to which order to push them. Meanwhile, the mission objectives require you to fly though hoops that Lex Luthor has inexplicably left suspended in the air, save innocents from harm, and toss objects about. Except for flying, to use your super powers you must acquire power-ups, such as heat vision, super breath, and super speed - all of which run out eventually.

Still, nothing sounds too offensive yet, right? It's the execution of all these elements that absolutely kills the game. The controls are so unresponsive that you'll assume you've pushed the wrong button and begin bashing on all of them for some sort of attention, and the perspective routinely manages to vex you. Now, add in all those simplistic goals mentioned earlier to this mix, and you've got an incredibly tedious experience in front of you. And it's one that resides in an environment so sparse it makes a Zen garden look crowded. This environment has suspect collision detection and obvious bugs that vie for your attention, and painted-in graphics that appear subpar even for a first generation N64 game.

But there's more. The multiplayer modes - a deathmatch and a race, where one player sets up the floating rings and the others attempt to push past him - feel very reminiscent of Ubi Soft's Buck Bumble, meaning they seem thrown in at the last minute and unfinished. The soundtrack would be considered bad for the SNES, and it loops constantly, while the sparse voice work even changes at one point, from Man of Steel actors to someone who sounds nothing like the lead of the show.

The only Superman compliment I can find to say is that flying beats walking. If I've been in any way unclear up to this point, let me state it simply: This is easily the worst game I've ever played. To steal a line outright from a film review in the San Francisco Bay Guardian, it serves no purpose other than to firmly establish the bottom of the barrel. 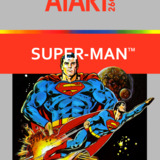