SuperHyperCube is a game that is both at home and imprisoned in VR. Set in a dreamlike space composed of geometric patterns and streaks of color, it eschews the touchstones of reality in favor of atmosphere that tickles the senses with special effects. Yet despite the case put forth by its hypnotizing sights and sounds, SuperHyperCube isn't the sort of game that could only "work" in VR. The demanding puzzle game within leverages the tech in a flimsy way--controlling the camera with your head--that ultimately makes your task more difficult with no apparent benefit. In mechanical terms, the way it utilizes VR could be accounted for by tilting an analog stick on a regular controller. Unfortunately, you don't have that option because SuperHyperCube can only be played in VR and controller-based camera movements aren't possible.

Your challenge is to rotate a cluster of cubes--moving forward at a constant rate--so that its silhouette matches a hole in a wall, allowing it to cleanly pass through to the other side. The cluster is easy to manage at first, but upon each trip through a wall, increasing amounts of cubes are tacked on to form a disordered group, and what was once a simple task becomes a frantic race to decipher the hole and your cluster before the two meet.

The steady progression from simple to complex shapes creates a gratifying learning curve at first, but there's a catch: As your cluster balloons in size, it gets more difficult to see upcoming walls--and holes--in detail without physically craning your neck around the virtual cluster. Walls eventually begin to rotate, adding a timing element that makes your job just a little more difficult.

Once you determine the correct orientation for your cluster, you have the option to boost, filling a gauge that feeds into a slo-mo ability that buys you more time before the cluster meets the wall. If you choose not to use the slo-mo trick, you can continue to boost and fill up a second meter--a bomb--that will blow up an incoming wall and skip to the next round. This is a bonus that's typically earned over the course of multiple rounds, but as you spend more and more time manipulating your cluster in search of the right orientation in later levels, you generally have less time to boost (and thus fill) these meters. Special abilities are difficult to rely upon--and thus something of an afterthought as you struggle to make sense of your ever-growing cluster.

It's immediately apparent that SuperHyperCube is a simple game, but that plays to its advantage. You only need to understand a few rules, and you're ready to go. The only barrier to success is your ability to comprehend complex shapes under mounting pressure. The random nature of your cluster from game to game makes each successive playthrough feel fresh, but when you hit a mental limit and the cluster becomes near incomprehensible in your mind's eye, your only chance at success boils down to making frantic rotations. Even if you manage to save a special ability for a truly difficult wall, the next one you face will prove even more difficult than the one you just cleared.

This realization is disappointing because the sights and sounds that envelop you while playing SuperHyperCube are an enticing lure to which to return, and the concept that drives the puzzles is conceptually brilliant. But even after a few hours of practice, it's tough to break new ground when you're dealing with such complex, unwieldy shapes. There comes a point when it feels futile to push yourself to play over and over again in the hopes that you'll somehow learn new tactics in the face of such limited options. SuperHyperCube feels more like a bite-sized, meditative experience that requires a bit of luck, rather than a game that calls purely upon skill or knowledge. It's a game you want to love, but it's also one that keeps itself at arm's length. 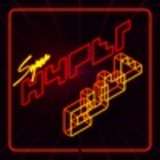 Peter played SuperHyperCube for three hours but never managed to make it past the fourth group's puzzles, despite his best efforts. GameSpot was provided with a complimentary copy of the game for the purpose of this review.