The thing that really sets SuperCross Circuit apart from other dirt-bike games is its speed.

As supercross and other forms of dirt-bike racing gain popularity, you can be sure that game companies will pick up on the trend and unleash a slew of dirt-bike racing titles. We've already seen a few PlayStation games, like Acclaim's Jeremy McGrath Supercross series and THQ's Championship Motocross Featuring Ricky Carmichael. 989 Studios is getting into the act with SuperCross Circuit, a fast-moving game with real-life tracks, equipment, and professional riders.

The thing that really sets SuperCross Circuit apart from other dirt-bike games is its speed. The game runs at a nice, fast pace, and maintains a reasonably high frame rate throughout the one- and two-player modes, even when there are several bikes on the screen at once. The bikes are also very easy to control with the analog pad and three main buttons, used for gas, brake, and goosing the throttle for a quick speed burst. You'll want to goose the throttle on the face of most of the jumps to maximize your air. Getting big air not only lets you fly over certain obstacles, but it's key in the game's freestyle mode, where you score points by doing tricks. The trick system centers around the L2 and R2 buttons. Different presses on the D-pad in conjunction with presses on the back shoulder buttons lets you select from several different tricks.

Aside from the freestyle mode, which must be unlocked, you've got a quick-and-dirty arcade mode, a practice mode, and a season mode. Season mode lets you name your rider, pick out what type of clothes he'll be wearing, and race all the game's tracks. As you race, you'll earn money, which can be used to purchase new bikes, as well as to upgrade engines, exhaust systems, tires, and suspension. Also, parts on your bike will wear out as you race, so you'll occasionally need to repair existing parts. As you complete seasons, you'll be able to move up from 125cc to 250cc bikes. You can create both freestyle and standard racetracks with the game's track editor, which gives you a grid and a list of track parts. It works pretty well, but there are already 25 tracks in the game, so you won't feel forced to create tracks to have a good time. You can, of course, save tracks to a memory card and race them in one- or two-player exhibition races.

SuperCross Circuit's textures occasionally look a little too pixilated at times, but it's a worthwhile trade-off when you take into account the sheer speed of the game and the playability that speed provides. Three camera angles let you see the action from behind the rider, the handlebars, and behind the bike. The standard behind-the-bike view is nice, but it can get extremely confusing out of the starting gate, where all the bikes are onscreen and jockeying for position. The game does a good job of emulating the buzzing sound of loud dirt bikes, but that doesn't mean it's not terribly annoying.

Speed, easy control, and lots of tracks make SuperCross Circuit a whole lot of fun for one or two players. Fans of the sport will enjoy the real riders, tracks, and equipment, but the game is simple enough for anyone to pick up and play, regardless of the person's interest in supercross racing. 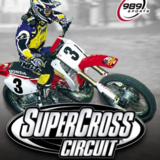