Unquestionably, Turbo Revival is a perfect choice for any Game Boy Advance owner looking for some great fighting action on the go.

For the most part, Super Street Fighter II Turbo Revival is identical to the arcade version of Super Street Fighter II Turbo--an impressive achievement. Previous home versions of Street Fighter II, for systems such as the SNES, Genesis, and TurboGrafx-16, and later the 3DO and the PlayStation, all managed to successfully reproduce the extraordinarily tight gameplay and fluid action of the arcade game. However, all of these versions had varying deficiencies, such as missing frames of animation, truncated sound effects, simplified background graphics, or bad loading times. Yet these were a small price to pay for having Street Fighter II at home. Turbo Revival for the Game Boy Advance also has its share of minor problems, but likewise, that shouldn't dissuade you from appreciating such a great version of Street Fighter II not just at home, but on the go, anywhere. Besides, Turbo Revival's few flaws are offset by a slew of extra play options, which aren't terribly interesting but still serve to add some extra variety to the game.

Like the arcade version, Turbo Revival features the entire eight-member cast of the original Street Fighter II, plus the four additional fighters introduced in Super Street Fighter II. Super Street Fighter II Turbo also introduced Akuma, Ryu and Ken's evil counterpart, as a hidden character, so expect to find him lurking about in Turbo Revival as well. Street Fighter II and its predecessor made famous the six-button control configuration used for many other fighting games after. The big issue with this translation is of course the fact that the Game Boy Advance has only two face buttons, plus two shoulder buttons. Turbo Revival makes do with this limitation by letting some attacks be pressure-sensitive. For instance, you can set the controls so that a quick tap of the B button makes your character throw a weak punch, while pressing the B button a bit longer throws a strong punch. Basically, this system lets you have the effects of six buttons using just four, and it does a fairly good job of it. However, you'll soon notice that the window for quick taps is vary narrow--you'll need to practice for a while before you can make the button controls respond precisely to your command. Since the arcade version of Super Street Fighter II Turbo was quite famous for how it made virtually every attack of virtually every character useful, it's not really preferable to simply ignore some of the attack buttons in Turbo Revival, though you do have this option.

Besides the buttons, the actual control of Turbo Revival works just great. Most special moves, even the tougher ones like Zangief's spinning pile driver, can be executed precisely using the Game Boy Advance's small digital pad. Still, some moves, like the super combos that require two controller motions in quick succession, will take practice even if you've mastered them in other games. Actually, Turbo Revival offers an interesting "easy special moves" option, which you can toggle on with the select button. This lets you perform most any move with a simplified motion--for instance, you can make Ryu and Ken throw a fireball just by pressing forward on the digital pad and pressing a punch button at the same time. This should be helpful for players who can't get a good grip on the system's smaller controls or who otherwise don't want to wear out the digital pad by performing countless dragon punches and spinning pile drivers on it.

Turbo Revival lets you choose from four different speed settings and handles even the fastest ones capably. Still, at times you'll see the game slow down, unlike the arcade version. Super combo moves, as well as fancier moves like Ken's fiery dragon punch, can make the action bog down. This can throw your timing off, but it isn't a serious problem. You'll also notice that the game's music suffers in translation. Though all the characters' memorable themes are retained intact, they sound tinny and flat on the Game Boy Advance. On the other hand, the character speech is authentic and sounds pretty much just like the speech in the arcade version--a mixed blessing, since Capcom replaced all the original speech beginning with Super Street Fighter II, and many of the new voices sound terrible. Tough guys like Ken, Guile, and Sagat just don't sound right with those nasally, high-pitched voices.

Visually, Turbo Revival doesn't look quite as good as the arcade game, but it looks pretty darn close. The arcade's bright colors are fully intact. Most of the game's character animations are there too and still look good all these years later. However, some frames of animation have been cut. For instance, in the arcade, most every character had a different animation for walking backward rather than walking forward, but these have been taken out of Turbo Revival, much like they were cut for the SNES versions of Street Fighter II. Many players won't be able to tell the difference--by all accounts, Turbo Revival's characters are big and detailed, especially for a portable game.

It's also worth noting that for some reason some of the original backgrounds have been modified in Turbo Revival. Some, like Dhalsim's Indian palace, are arcade-perfect--you'll count all six elephants trumpeting away. Others, like Guile's and Chun-Li's stages, borrow elements from the Street Fighter Alpha games. Still others, like Ryu's and Zangief's stages, are tweaked versions of their original backgrounds. Similarly, Capcom replaced all the still images from the original, such as from the intro movie and the character select screen, with all-new hand-drawn art. These big, colorful portraits, as well as the full-screen graphics of the winner of each match, are a nice addition to Turbo Revival. Even so, die-hard fans will miss the original graphics both here and in the backgrounds. You might also notice that Street Fighter II's minimal blood effects have been omitted from this version. Finally, fans of the series will undoubtedly get a chuckle out of an apparent miscommunication in the translation from Japanese to English. The vain bullfighter Vega, the boxer Balrog, and the evil mastermind M.Bison all had their victory quotations switched about, presumably because their names don't correspond to the same characters in the Japanese version. Seeing M.Bison declare, "Handsome fighters never lose battles," is almost surreal.

Turbo Revival does feature all the bonus stages from Street Fighter II, including the beat-up-the-car stage. The game also introduces several additional game modes, such as training, survival, and time attack. These give you specific scenarios--such as survival mode's highest challenge of beating 100 foes with one life bar--and let you keep fighting as new foes keep popping up. You'll unlock these modes as you play and win and will appreciate them as a diversion from the game's arcade mode. In the arcade mode, the computer actually provides a vicious challenge, even at low difficulty settings--like in the original game, each computer-controlled character fights differently and brutally, even if they're sometimes susceptible to repeated attack patterns. But the computer is definitely fun to fight, though of course you can also play Turbo Revival against a human opponent. You'll need a link cable and an extra copy of the game along with a second Game Boy Advance to do so.

The arcade version of Super Street Fighter II Turbo is still an excellent game--it's aged elegantly, and it's still one of the most well designed fighting games ever made. Therefore, having a 95 percent perfect version of that game in the palm of your hand is by all means a startling concept. Unquestionably, Turbo Revival is a perfect choice for any Game Boy Advance owner looking for some great fighting action on the go. And for longtime fighting game fans who may not have a Game Boy Advance yet, this is the perfect reason to get one. 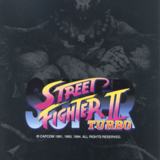