At its surface, Super Robot Taisen OG Saga: Endless Frontier is nothing more than a generic Japanese role-playing game that was seemingly cranked out of an RPG-O-Matic machine. Without any original hooks or features unique to the Nintendo DS, it's difficult to see how it could attract new fans to the long-running franchise. But from the depths of its turn-based template you can salvage a few sparks of life that give Endless Frontier a reputable edge. The long chains of awesome-looking attacks are counterbalanced by some extraneous exposition, but if you sift through the snoozer of a story and focus on the smart writing, you'll have a good laugh between the fantastic fights.

Endless Frontier is so well translated that its punchy insults and clever, self-aware jokes will have you smiling every time they pop up. Subtle references to other games, such as Tomb Raider, also make for solid humor. Razor-sharp wit and funny one-liners make hero and bounty hunter Haken Browning a likable protagonist, and believable conversations through intelligently written dialogue give the game's cast a natural feel. Clashing characteristics such as Haken's snarky, sardonic attitude and Reiji's brooding, serious demeanor make for particularly great exchanges. But the story is so jam-packed with irrelevant information that it will likely overwhelm you. It's hard to give a hoot about the intricate details of rock formations, the science of shifting dimensions, and the history of belt-covered cat girls, especially when cowboys and androids are going toe to toe with megasized mechs.

Things start out simply enough when Haken and his cybernetic assistant, Aschen, are hunting for bounties. When they find a princess with a price on her head snoozing on a starship, things take a turn for the confusing. Almost immediately, excruciatingly thorough text boxes start detailing the minutiae of the world's rich fiction, locations, and races with game-specific lingo and the occasional Japanese phrase. Ironically, all of this detail buries any semblance of clarity. Convoluted exposition makes it tough to keep track of who's interfering with each character's goals, or what those goals are, never mind the mysterious Orchestral Army and its incomprehensible intentions. The narrative is complete nonsense, but everything really teeters off of the edge when the characters devolve into blatant perverts that spout off nicknames based on cup sizes. Obscenely proportioned female characters encourage loads of sexual humor and copious innuendo that gets old quick and doesn't ever die down. Fortunately it's possible to largely ignore the babbling story and immature jokes and instead focus on where to go next.

The reason you'll want to carry on through to the next mission is because of the excellent combat. Rather than stick with Super Robot Taisen's usual grid-based battles, Endless Frontier is more akin to Final Fantasy or Suikoden. If you're a genre veteran, you'll find that the linear dungeons limit exploration, and a standard structure of "walk, fight, talk, boss fight" is a formula that you've been familiar with for more than 20 years. You'll pop in and out of menus during one-on-one character bouts to drink delicious health potions, boost your stats with items, and use special skills. What breaks Endless Frontier free from these generic trappings is that its fights are fun to play and enjoyable to watch thanks to stylish presentation; big, beautiful character sprites; and a deep, layered fighting system. Random battles have been a staple of the genre for decades, but while they're irritating in some games you'll find yourself anxiously awaiting the next one in Endless Frontier.

Fights are fast, fun, and entirely addictive. Each turn, characters can attack numerous times depending on how much command power, or COM, they have. Pressing the A button spends a percentage of your stored COM on a combination attack. Combo skills, unlocked as a fighter levels up, vary in style, power, and result. The order of these varied abilities can be customized within a character's skills menu, giving you complete freedom in how you approach a certain situation. For example, if an enemy is deflecting your uppercut, putting Haken's guard-breaking shotgun blast ahead of it breaks the foe's defense, at which point you can send it skyward with the uppercut. This opens the door to both lethal juggling combos and long strings of critical hits. Or, if a foe catches the wrong side of Aschen's foot, he or she will launch into a nearby wall with a chance to be stunned, thus limiting his or her ability to defend. Each character has a diverse mix of customizable moves that you can swap around on the fly, which keeps things interesting throughout.

Once you get the hang of each fighter's attack order, you'll be keeping lengthy combos alive by continuously tapping the A button. Drumming to the beat of your characters' sequential fisticuffs feels almost like a rhythm game, and tapping to the tempo plays prominently into the combat's risk/reward system. Interrupting your fighter's flow sacrifices potential damage in exchange for a juicy boost for your frontier gauge, a meter that fills as you fight. However, improper presses cut off the attack without awarding you any bonuses. Once you've filled the frontier gauge, you can unleash a brutal overdrive attack. These intensely powerful combos are flashy, stylish, and cap off with a cool anime cutscene. These brief clips make the most of the game's already awesome animation by showing gorgeous-looking 2D characters doing cool things. Movement is fluid and detailed, so much so that you'll see Haken's jacket ruffle as he retracts his gun's broadsword bayonet. Likewise, the long hair of the ladies will sway as they spin, and keen-eyed observers will notice characters reaching for their secondary weapon during an attack as they prepare for their next combo.

At certain points in your attack strings, you can tap the D pad to summon a buddy to come in and lend a deadly, white-knuckled hand. Seeing an enemy rag-doll through the air as two characters lay a simultaneous smackdown is morbidly delightful. Endless Frontier offers a daunting amount of depth, but the satisfaction that comes from inflicting serious damage through lengthy attacks is easy to learn. And given that you constantly have to time your blows, you'll always feel engaged in the fun, fast-paced battles. You can also keep combos going by swapping spots with the on-deck ally by touching the D pad again. Watching a comrade come in to cooperatively beat the pants off of an enemy adds more satisfaction to an already fulfilling fighting system.

Super Robot Taisen OG Saga: Endless Frontier uses old-fashioned methods of progression that are anything but exciting. However, the engrossing combat that's sprinkled throughout is absolutely awesome. The mix of rhythmic attacks and a deep array of options lets the game break free of its routine RPG makeup and stand out. And in spite of the claptrap history lesson disguised as a story, the writing is undeniably fantastic. Who knows? You might even find yourself chuckling at the odd insinuation or boob gag despite being uncomfortable with it. 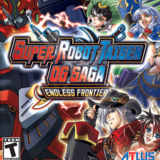