Super Monkey Ball Jr. is the kind of game you want in your collection, even if you don't generally enjoy puzzle games.

Few games can boast a concept as simple as that found in Sega's Super Monkey Ball series. Monkeys are trapped inside of spherical balls that allow them to roll around like marbles. These monkey marbles are stuck high in the air atop a lofty maze. Your job is to roll the monkey to the goal at the end of the maze before the time limit elapses and without falling off the edges of the maze. It's pretty easy, in theory. For as simple as it sounds, however, rolling the monkey to the goal is not an easy task. But it sure is a lot of fun.

Many of the stages feature narrow, curved pathways that make it easy to slip off, while momentum can launch your monkey ball off the lip of a curve as effortlessly as you'd toss a pebble into the air. There are other obstacles to consider as well, such as rotating platforms, powerful pinball bumpers, and hills with inclines so steep that they fight you every step of the way. You can play Super Monkey Ball Jr. without ever pushing a button, but it's every bit as addictive as games with twice the complexity, primarily because you continue to believe that you can solve the current stage even after numerous failed attempts.

As you may well know, Super Monkey Ball Jr. is fashioned after the original Super Monkey Ball games that appeared on the Sega Dreamcast and Nintendo GameCube consoles. One of the best aspects of Super Monkey Ball Jr. is that it's pretty much identical to the game that is available for these more powerful systems. The features are the same. There are four monkeys and three difficulty settings to choose from, with a grand total of 69 different stages to solve. The graphics are the same. The stages are composed of crisp, 3D polygons that tilt and rotate as you navigate your monkey down the course. The monkeys themselves don't really do anything except tumble and spin, so there isn't much legitimate action to observe, but the overall size and visibility of each maze are astonishing on a system that's barely known for its 3D capabilities. Even the audio in Super Monkey Ball Jr. is identical to that of its console counterparts. The music is upbeat and happy, like what you'd hear while watching golf or tennis on a Sunday morning, and the sound effects are full of digitized speech, hilarious monkey cries, and a good variety of dull thuds that accompany your monkey ball along the course.

Super Monkey Ball Jr. also contains the same minigames found in the console versions of the game. There's monkey fight, where four monkeys step into a ring and try to punch each other off the platform as many times as possible; monkey golf, where you can play nine holes of miniature golf using your monkey as the golf ball; and monkey bowling, where you hurl your monkey down a lane in order to knock down the bowling pins at the end. In addition to single-player play, all three of these minigames support multiplayer matches with the use of a link cable. An additional minigame, called duel, is playable only with the use of a link cable. If you don't have access to multiple systems or a link cable, you can still play monkey golf and monkey bowling with your friends by passing around a single system and taking turns. Surprisingly, these minigames are so entertaining that you may end up playing them much more than the main game itself.

The only significant problems with Super Monkey Ball Jr. lie in its design. In the end, it's just a puzzle game, which means that the gameplay, graphics, and audio don't achieve the same levels of extravagance that you'd find in the action or role-playing games that are typical on the Game Boy Advance. Also, the GBA control pad is less responsive than the analog sticks used in the console versions of the game. This won't hurt your ability to get through the majority of levels, but you may lose a life or two because of it.

All told, Super Monkey Ball Jr. is the kind of game you want in your collection, even if you don't generally enjoy puzzle games. It's easy enough so that anyone can play it but challenging enough to stump even the most intellectual of players. It's also an excellent game to use to show off the graphical capabilities of the Game Boy Advance to friends that have yet to buy the system. 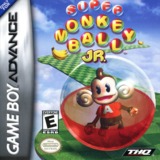 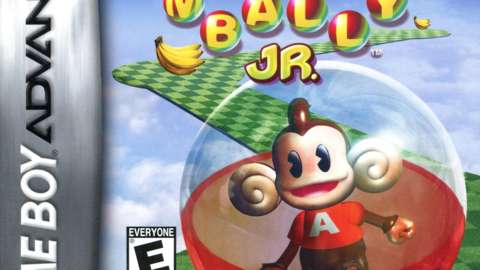 Super Monkey Ball Jr. is the kind of game you want in your collection, even if you don't generally enjoy puzzle games.