Super Monkey Ball 3D's one enjoyable mode can't compensate for the other two stinkers, making this a disappointing showing for the sphere-bound simians.

Since they first rolled on to the video game scene a decade ago, monkeys in balls have participated in a huge variety of activities. Previous games in the series have had dozens of things for the plucky primates to do, yet Super Monkey Ball 3D has only three modes. The best of the bunch is the series staple, Monkey Ball, and steering your monkey through mazelike stages and collecting bananas is still good fun. The 3D visuals and the gyroscopic motion controls enhance the enjoyable action, and the difficulty ramps up nicely, though it never quite reaches the fiendish level of its predecessors. The other two modes are significantly less fun and hardly worth playing. The kart racing game (Monkey Race) is hamstrung by poor controls, and the simplistic, sluggish action of the four-person brawler (Monkey Fight) saps all the excitement out of slapping a monkey and seeing bananas fly out. This leaves Super Monkey Ball 3D woefully low on worthwhile content.

Though you may have done it many times before, guiding a monkey in a ball around a tilting level is still a lot of fun. You control which way the platforms tilt to send your monkey rolling around holes, over hills, down ramps, and along narrow strips, trying to reach the goal before time runs out and collecting bananas as you go. The themed worlds each have nice visual flourishes, and playing in 3D causes the stages to stretch out before your eyes, spicing up the action with a nice sense of depth. Before you start each session, you can choose to use the circle pad or motion controls. With the latter option, you calibrate the system by leaving it on a flat surface for a few moments when prompted. If you do this, you'll have to bow your head downward to look at the screen while you're playing, which can get uncomfortable after a while. You can also try calibrating the system in a more upright position by holding it very still, and though you may experience some issues bringing your ball to a complete stop, this method can be much more comfortable.

After you get your positioning squared away, the intuitive motion controls work very well. Tilting the 3DS to tilt the world is a fun sensation, even though the motion controls don't offer the precision of the circle pad. They also don't support 3D visuals well because as you tilt the system, your perspective changes and the effect is lost. You can earn medals for completing each world with both control schemes, and even in the later levels, Monkey Ball never gets truly challenging. There are definitely some tough ones amid the 80 stages, but there aren't any that will make you cringe with trepidation the way past games in the series may have been able to do.

Unfortunately, you will cringe at the thought of playing the other two modes--Monkey Race and Monkey Fight. The first is a kart racing game, complete with fanciful tracks and goofy power-ups. Each race has eight competitors, and up to four can be players linked by a local wireless connection (multi-card and download play are supported). The nine tracks across three worlds start off dull and straightforward but become more and more complex as you progress. Some of the attempts at complexity are misguided, however. Levels with a long dinosaur spine and floating sections of roadway both have drop-offs that are very hard to foresee, making you resort to memorization rather than reflexes. And even your reflexes can't always be trusted because of the mercurial speed dynamics. On-track hazards slow you down too much, while drafting behind other players makes you speed up too quickly. There isn't a good balance of speeds, so you never really get comfortable behind the wheel.

The controls are also problematic, especially when attempting the spin-and-dash maneuver. By holding the R button during a high-speed turn, you can charge up a dash. Yet unlike many other kart racers that let you drift around turns to gain a speed boost, in Super Monkey Ball 3D, the drift mechanic is separate. This means that to get the dash, you actually have to continue turning at a normal rate. It's very easy to oversteer and rocket out of your turn at a 90-degree angle from your original racing line. Though you can improve your skills through practice, it's still an awkward move that further contributes to the poor quality of Monkey Race. Seeing the racetrack stretch out in front of you in 3D is neat effect, but it is overshadowed by the unpleasantness of actually racing.

If you want to get out some of your kart-fueled frustration in Monkey Fight, don't expect much in the way of satisfaction. In this mode, four players fight to see who can gather the most bananas in simple arenas that are little more than a few suspended platforms. You have light and heavy attacks, the latter of which vary from character to character. As you run and jump from platform to platform, you try to grab bananas that you find lying around. If there aren't any on the ground, you can knock one of your competitors around a bit and his or her bananas will come flying out like he is a produce-filled pinata. A golden barrel occasionally drops into the mix, and the player that punches it open can use his or her unique superattack to put a big hurtin' on everyone else. There are a few different variations on the basic modes, but these don't really impact the core action, so each match feels similar to the last. Your strategy is a simplistic mix of avoiding enemy strikes, hitting your enemies, and grabbing bananas. The controls don't respond with alacrity, so everything moves at a sluggish pace, and the whole affair feels listless and unexciting.

With boring fights and frustrating races, the only good thing Super Monkey Ball 3D has to offer is Monkey Ball mode. Rolling around stages in 3D or tilting the entire handheld to tilt the world are both fun experiences. But as entertaining as this mode is, it isn't enough to support an entire game. Monkey Race and Monkey Fight are poorly executed choices that don't get substantially better when played with friends, and they feel like botched attempts to ape Mario Kart and Super Smash Bros. Even if you have a burning passion for Monkey Ball, Super Monkey Ball 3D is likely to douse it with disappointment.

View Comments (2)
Back To Top
5
Mediocre
About GameSpot Reviews 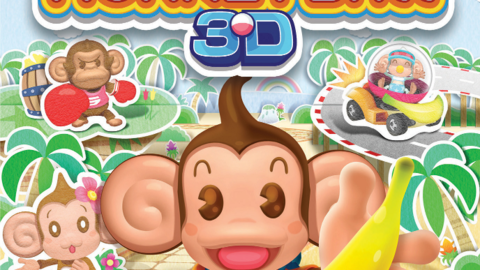