It's absolutely astonishing that Nintendo let 13 years go by before making Super Metroid readily available again, but the most important thing is that you can now play this masterpiece without having to track down the original Super Nintendo Entertainment System cartridge or fumble with legally questionable emulators. As long as you have a Wii and 800 Wii points (roughly $8) to spend, you can simply go into the Virtual Console shop and add Super Metroid to your Wii's channel lineup. True, what you're getting is basically nothing more than a no-frills, emulated version of a 13-year-old SNES game that isn't a cutting-edge, technical marvel anymore, but the original game was so solid and so well-crafted that the Virtual Console version is worth ponying up those Wii points for. And by doing so, you'll be downloading one of the best 2D action adventure games ever produced.

What makes Super Metroid so awesome is that it fires on all cylinders. You get to run around as Samus Aran, the hottest bounty hunter in the universe, and blast aliens with a dozen different high-tech weapons, including the three-way spazer beam, the ice beam, missiles, and bombs. The ice beam freezes enemies solid, turning them into platforms that you can stand on. Other weapons tend to reveal hidden passageways when they're directed at walls and floors. For her part, Samus can also morph into a ball, perform a wall jump, and dash at supersonic speeds. The general idea here is that the planet Zebes is a large network of interconnected rooms and environments that you have to gradually work through in order to locate and fight the space-pirate bosses that have kidnapped the last surviving Metroid parasite.

Colorful 16-bit graphics and moody, atmospheric music bring the different areas of Zebes to life. If you stop and take a look around, you'll observe water flowing in the background and pulsing light emanating from volcanic vents. The music is full of dramatic beats when it needs to be, but, by and large, the soundtrack consists of subtle instrumentations that make the dank underworld of Zebes seem even spookier. Samus is a fluidly animated sprite with a healthy variety of acrobatic moves. The aliens and space pirates you'll encounter are also nicely detailed. They typically range in scale from tiny to roughly double the size of Samus. Some of the bosses exceed the visible screen area. In fact, one of the earliest bosses you'll encounter is a piglike alien named Kraid that stands so tall that you have to jump atop elevated platforms just to attack his fat head.

In addition to the already lively action and rich presentation, the game's pacing and difficulty are perfectly balanced. You'll come across new weapons and upgrades at regular intervals, which, in turn, allow you to access new areas as well as uncover secret passages in areas that you've already explored. These include the super bombs that every Metroid fan has come to know and love, and an energy grapple that lets you swing across lengthy gaps. Along the way, an automatic mapping feature keeps track of save rooms and refill areas, and shows you what areas you have and haven't yet explored. When you enter a new area, the obstacles and enemies you come into contact with will leech away heaps of health. Yet after you pick up another energy tank or locate the next suit of armor, they won't be so deadly. As for the bosses, you'll probably die two or three times against each of them before you figure out their weaknesses. However, once you figure out the right tricks, you'll totally kick that bad alien's tail the next time you restore your save file.

For your first time through, you can expect to spend eight solid hours finding your way around the planet Zebes and eliminating all of the pirate bosses. After that, don't be surprised if you feel compelled to do it again in less than three hours to witness the best ending. Super Metroid has that effect on people, as evidenced by all of the speed-run videos that players have recorded over the years. In any case, you'll be getting a good amount of playtime from your 800 Wii points.

The Virtual Console emulates the game without any problems. The graphics look sharp regardless of whether the system is set to output in 480i or 480p, and the musical layers come across just as they did on the Super NES. You can use a GameCube controller or the Classic Controller attachment to play, though the Classic Controller gets the nod for comfort because its button layout is identical to the Super NES's. If need be, you can always reassign the buttons from the main menu.

Anyone who has played Super Metroid before already knows how great it is. If you haven't delved into the planet Zebes, but you enjoy action games or you've been itching to explore Samus' 2D roots after playing the Metroid Prime series, this is the place to start. Don't worry about the original NES version of Metroid that's also available in the Virtual Console shop. Super Metroid recounts its threadbare story in the opening screen and is better in literally every conceivable way. 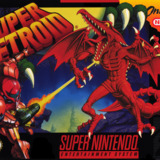