Time to test those friendships.

Anyone who's played a Mario Party game in the past 20 years has a good idea of what to expect from Switch's Super Mario Party, but Nintendo's latest offers a few new modes that each add their own creative spin on the tried-and-true formula. In many ways, Super Mario Party feels smaller than previous games in the series, but added layers of strategy and clever, fun minigames help keep it lively and fresh.

The fierce competitive nature of the series' earliest titles is back, as Super Mario Party ditches Mario Party 9 and 10's cooperative car mechanic and once again pits players against each other in a race for Stars. The overall goal in Super Mario Party is to earn five Gems, which you get after completing each of the game's five major offline modes: Mario Party, Partner Party, Challenge Road, River Survival, and Sound Stage.

Mario Party mode features the series' classic formula of bite-sized games interspersed between rounds of board game hijinks. Your character is still placed on a board with three others where you'll all race after Toadette and her collection of Stars. The biggest change is the introduction of character dice blocks; while previous Mario Party games utilized virtual 10-sided dice, now every character has two dice blocks, one six-sided and the other unique to them, and you have to decide which one to use each turn. The six-sided die rolls a one through six, while each character die comes with its own set of strengths and weaknesses.

For example, Mario's has a number three on three of its sides, while the remaining three sides are one, five, and six. In comparison, the devilish gambler Wario has a special die where two of the sides cause him to lose two coins, but the other four sides are sixes. For the first time in a Mario Party game, your choice of character is more than just aesthetic, and figuring out the best time to use a specific dice block adds a level of strategy to what's typically been an act of randomness.

Each of the game's four boards requires slight tweaks to your strategy for reaching the Star, but they're all small, and most don't take advantage of their unique makeups. Whomp's Domino Ruins, for example, features Whomps who will block your path down certain shortcuts. The board only has two Whomps, though, so you don't encounter them very often, and even when you do, the board is small enough that taking the long way around won't put you at much of a disadvantage. Super Mario Party's four boards don't feel distinct, so your strategy for each one won't be all that different. And since there are only four boards in total to pick from, Mario Party mode grows stale fairly quickly.

There are a total of 80 minigames in Super Mario Party, putting it just behind Mario Party 6, 7, and 9 in terms of quantity. Of the 80 minigames, nearly half rely on the motion control or rumble features in the Switch's Joy-Cons. Don't fret; both the motion and rumble features work surprisingly well, and it makes for some of the most cleverly designed games in the Mario Party series. For example, in Fiddler on the Hoof, you and three others race horses, and making a pulling back motion with the Joy-Con to simulate whipping the reins increases your score if you move with the beat of the song that's playing. In Nut Cases, you and a partner need to outwit the other team by claiming the five boxes that have the most walnuts inside them. You get an idea as to a box's contents by picking it up and measuring the severity of your Joy-Con's vibration. As Super Mario Party only supports motion control with a single Joy-Con, you won't be able to play the game in handheld mode or with a Pro Controller.

Partner Party mode is Super Mario Party's reimagining of Mario Party 6's Team Battle mode. The rules are similar to Mario Party mode, but there are more paths around the board, and you need to actually land on Toadette's spot to get a Star instead of just collecting it while passing by. The minor obstacles from Mario Party mode become trickier to get past in Partner Party because you need to remain mindful of both you and your partner. Paying to move Whomp out of the way might get you to the Star more quickly, but doing so could trap other players, including your teammate. There's the possibility of winning the next minigame and earning enough coin to buy an item to free them, but that's no guarantee. This type of consideration and amount of forethought simply doesn't exist in Mario Party mode.

Two of the other major modes, River Survival and Sound Stage, are new to the Mario Party franchise. The former has you working together with three others to survive a trip down a dangerous river while playing Co-op minigames, while the latter is an energetic dance competition where you solely play Rhythm minigames. Both River Survival and Sound Stage offer fun, albeit brief, alternatives to the staple Mario Party formula. The Co-op and Rhythm minigames are also some of the best in the Mario Party series, especially the Rhythm ones like Fiddler on the Hoof, that have you actually standing up and moving around to match the groove of the game's characters. Both Co-op and Rhythm minigames lack the heated competition of other head-to-head minigames, but they do pump up a room.

Super Mario Party's final major mode, Challenge Road, is the closest the game has to a single-player campaign, but it only opens up once you've unlocked all 80 minigames. The mode has you play through every single minigame with specific handicaps placed on you to make each one harder. For example, a racing minigame might challenge you to get first place without running into any of the track's hazards. This mode comes very close to giving Super Mario Party just the amount of challenge the game would need to increase its longevity, but unfortunately it buckles. If you fail at a challenge three times, the game asks you if you'd like to just skip it. You can always come back and beat the challenge later if you want, but the mode never punishes you for skipping any of the minigames. As long as you get to the end of the road, regardless if you skipped a dozen challenges to get there, you'll still earn one of the five Gems you need.

Super Mario Party also has several smaller modes and features that aren't tied to earning the Super Star title. In Mariothon, you compete in five minigames where outlasting your opponents in time-based games earns you extra points on the tournament ladder. There's an online version of Mariothon too, and you can either play in a private lobby with your friends or compete on a worldwide stage and fight to climb up in the rankings. We had no connectivity issues when playing online, but the private lobby did load faster. Square Off is also a minigame-based tournament, but after each win, you're allowed to claim a territory space. Owning the pieces of territory on either side of another player's territory nets you their space too, and the game continues until every space is filled. The winner is whoever owns the most spaces at the end of the match. Both modes give you a goal to strive for while playing minigames, which creates extra levels of competition amongst a group of friends.

There's also Toad's Rec Room, where you can play unique games that change based on how you position your Switch, and a Stickers room, where you can cover a wall in a mural of stickers you've collected. Both seem tacked on to Super Mario Party; the former to justify putting the game on a console that can be played on a horizontal plane, in kickstand mode, or in a dock, and the latter to give you a reason to go out and buy some Amiibos to scan and get special stickers that aren't earnable within the game. Although the option of changing perspectives in Toad's Rec Room--such as looking at a baseball field from a bird's eye, laid-back, or pitcher's view--is an interesting gimmick, none of the games are really made better by adjusting how you look at them. The Stickers room is not worth getting invested in at all.

Everything about Super Mario Party feels smaller in comparison to previous titles in the series. Both Mario Party and Partner Party mode play on small boards, and certain modes, like Challenge Road, have clear tier points to make it easy to play through in small chunks. So it's all the more puzzling that you can't actually play Super Mario Party on the go in handheld mode. Given you need a seperate Joy-Con to perform the motion-based actions in the game, it makes sense, but it's still odd to see a game on Switch that actively prevents you from making use of the console's portability.

Most of Super Mario Party's varied assortment of 80 minigames are fun, especially if you've got a full group of four players, as the NPCs aren't smart or skilled enough to pose much of a challenge until you unlock Master difficulty. The new Partner Party, River Survival, and Sound Stage modes add enjoyable alternatives to Mario Party mode--which at least returns to its competitive roots. And even if the unique character dice blocks don't shake up Super Mario Party's four boards enough to give Mario Party mode some longevity, they implement small moments of strategy into a series that has for too long solely relied on randomness to determine a winner.

Editor's note: This was originally a review in progress. Now that the game has launched, we have updated and finalized this review to reflect our experience with the online functionality.

View Comments (49)
Back To Top
7
Good
About GameSpot Reviews 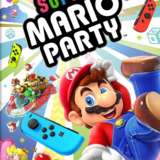 When Jordan first tried the original Mario Party, he had no idea the game would inspire a hobby that would eventually become a career. It took Jordan about 15 hours to gather Super Mario Party's five Gems and achieve Super Stardom. Nintendo provided codes for the purposes of this review.