It looks like we finally have the "killer app" for the Game Boy Color.

Hi, there. I've just spent the last week playing what could possibly be the best Game Boy Color game yet seen. Sleep patterns have been altered, thought processes have been dominated, and numerous deadlines have been missed all because of Super Mario Bros. DX. It's been completely worth it.

For those who don't know, this is the first of hopefully many NES-to-GBC conversions carried out by those lovable folk at Nintendo. What better way to start the series than with the game that really started the whole Nintendo generation - Super Mario Bros. The game stars rotund plumber Mario and his little brother Luigi, as they attempt to rescue fair Princess Peach from the clutches of evil Koopa King Bowser. Does this sound familiar to you? Eight "worlds," each with four areas, must be explored before a royal rescue can be made. Why Mario can't just go directly to the castle in 8-4 and save everyone a lot of trouble is never really explained.

While it would have been enough just to translate the game to the small screen, Nintendo has really pulled out the stops to make this Deluxe edition a top-class product. Let's take a look at each part in turn.

Almost 15 years old and still going strong. Super Mario Bros. is everything that's good about video gaming - easy to understand, hard to put down. Yes, it's side-scrolling platforming at its most basic. Sure, there are plenty of other GB games out there that offer more features. There aren't, however, any that can boast better level design and more intuitive playability. Everything about each stage makes perfect sense - well, at least as much sense as a place called "The Mushroom Kingdom" should - and there's a real sense of balance in the works. A particularly difficult section of one stage will typically become easier if the player spends a little time exploring the seemingly empty areas beforehand, or bashing the inconspicuous blocks to reveal power-ups. Exploration brings rewards, basically.

The control is similarly intuitive - you never feel as though Mario (or Luigi, if you press Select on the map screen) is at fault when he/you dies. While it's physically impossible to change direction while jumping several times your height, in Super Mario it feels perfectly natural, and it's the only way to get past certain sections.

However, one minor problem arises from the conversion method. When this project was initially announced, it was commonly thought that everything was going to be shrunk down or changed to fit into the lower-than-NES resolution screen. Not so. Every pixel has been retained, which is a good thing, as far as level design, but this can get aggravating sometimes for the player. There are plenty of times during each session when you won't be able to see where you're supposed to be jumping - a leap of faith, typically a Nintendo no-no. Standing on a platform and pressing Up or Down reveals the surrounding locations, but this is out of the question when you're in a tight situation. Annoying, but better than the alternative.

NES devotees will, of course, know this game backward and forward. Before the questions come pouring in - yes, every secret, bonus, bug, and warp is included. All the techniques, the 1-up loops, the fireworks - it's all here. No compromises have been made with the graphics, either. This shouldn't be too much of a surprise, considering the original visuals were laughably basic, but they somehow manage to look cool on the tiny GBC screen anyway. This game is about all the proof you need that there's no need for custom 3D hardware or 32-bit processors for a machine with a screen half the size of a credit card.

That's Super Mario Bros., then - 15 years old and still perfect in every way. An absolutely essential purchase for anyone who likes video games. But wait! There's more!

"Super Mario Bros. For Super Players," or Super Mario Bros. 2 Japan as it's known here. The only other time western gamers would have had a chance to play these extra-hard levels was when Super Mario All-Stars hit the SNES. As the title suggests, this is just for Super Mario experts. Even the early stages are phenomenally tough - a slightly mistimed jump usually results in instant death. It's pretty intense stuff that will test the patience and tolerance of even the sternest gamer. Don't say we didn't warn you!

This is pretty cool. In Challenge, players explore levels they have already conquered, looking for five special coins, a Yoshi egg, and maximum points. The levels are slightly altered from the normal game, and this is more about exploration than Goomba-bashing. At the end of every level, Toad rates your performance and adds your points to an overall score, which will no doubt unlock more Super Mario-related goodness later on.

Have you ever played Super Mario Bros. and thought, "Well, this is nice and all, but it would be so much better if there were a racing option"? Neither had we, but there's such a gameplay mode available here. Players race against each other (or a ghost in single-player mode) to get to the end of each stage and can activate switches to block their opponent's path. It's minutes or possibly hours of fun, if not more. The only two-player option that is even remotely as cool is one that shows you how high score tables can be merged with the infrared link - so far the best (if only) use of that piece of hardware.

Wow, has Nintendo really pulled out the stops here. A special "Toy Box" section gradually releases some cool stuff to reward hardworking players and makes for some cool diversions. The first toy is a calendar, to which users can add their own symbols, comments, and reminders - who needs a Palm Pilot? Next up is a fortune teller, which randomly dispenses "lucky" or "unlucky" advice - what effect this has on the game isn't really clear. Play the main game for a while and extra toys appear - Toad awards you with banners and sticker designs, Peach lets you alter the boot-up screen, and a special section gives you a sneak at where Yoshi is hiding in the Challenge game. All of these goodies can be edited and printed with the GB Printer.

It looks like we finally have the "killer app" for the Game Boy Color, then. Worth buying a GBC just to play. Well done, Nintendo - now, where's Zelda and Metroid...? 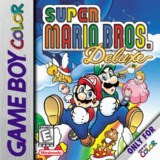