Super Mario Bros. 35 marks something of a historic moment for the multitalented plumber. In Mario's extensive past, there have been plenty of multiplayer games, but many of these come in the form of sporting spin-offs or asynchronous multiplayer where you take turns attempting levels. Even the likes of New Super Mario Bros. and Super Mario 3D World--both of which feature competitive elements--ultimately revolve around a shared goal of completing levels together as the main objective. This is where Super Mario Bros. 35 stands out; Mario's latest in a long line of entries is the first time you compete synchronously against other players on traditional platforming courses. It's a significant achievement both in and of itself and as an online multiplayer experience, even if there can be a few dull moments.

In the vein of fellow Nintendo Switch Online release Tetris 99, Super Mario Bros. 35 has you compete against up to 34 others simultaneously to be the last Mario standing, playing levels from the original NES Super Mario Bros. Like Tetris 99, your play area takes up the center of the screen while everyone else's concurrent games form a surrounding border, allowing you to glance at opponents' progress as you jump your way through course 1-1 and beyond. Essentially, the main two factors separating Super Mario Bros. 35 and Super Mario Bros. is the pressure of competition, plus a lot more enemies to navigate.

As is the case with most of Mario's platforming adventures, running out of time or dying are your only two methods of failure. However, there are no extra lives to be had here, only one chance per round to become the only Mario remaining. In your quest to be the number one mustachioed Italian man, you disrupt other players by defeating enemies, who will then be sent over to other courses. Additionally, taking another note from Tetris 99's playbook, you can select who to send those Goombas and Koopas to or let a preset choose--such as who has the least time remaining or anyone who's actively targeting you.

Causing chaos by sending waves of baddies to competitors is fiendishly fun, knowing you're inconveniencing them at every step. It also forces you to approach these familiar Mushroom Kingdom levels in tangibly different ways. Instead of speeding through and trying to slide down the end flagpole in record time, you're thinking about what approach will actively cause others to slip up in response. This means trying to take down Hammer Bros. as opposed to running straight past them and trying to make Piranha Plants pop up in tricky locations. On the receiving end, it's brutal encountering a rogue Bowser--or any wave of minions in a tight space, for that matter.

As tricky as facing off against several Bowsers in a random course can be, it's a great way of refreshing decades-old content to make it feel like a new challenge all over again. Similar to how seeking out opponent fodder changes your course approach, dealing with different enemies in unfamiliar environments creates variety in a way perhaps only the Mario Maker games have done previously. These unique challenges alter each course's rhythm, warping your sense of muscle memory and course layout knowledge to intelligently generate a slightly different experience each time you jump into Super Mario Bros. 35.

In the absence of extra lives, Super Mario Bros. 35 finds an alternative use for coins in the form of random item power-ups. As soon as you collect 20 coins, you can press X to bank them in return for an item decided by fate. This could be a Mushroom or Fire Flower power-up, the limited invincibility-inducing Star, or a POW Block that clears the screen of enemies. While the random allocation of items puts you at the whims of chance, you create your own luck to a degree by collecting enough coins to have multiple rolls of the metaphorical ? Block.

From many angles, Super Mario Bros. 35 is a very different beast to the many Mario platformers you know and love--which is simultaneously a strength and a weakness. Survivability reigns supreme over speed, which often rewards slower play to the detriment of excitement, particularly during each round's final moments.

The beginning to middle stages of each round are by far the most exhilarating as you dash through courses while dodging the many nefarious characters invading your game. Ironically, Super Mario Bros. 35 slows down significantly when the music speeds up to signal that only five players remain, and even more so when it becomes a duel against the sole other Mario standing between you and victory. This is because it's often best to play conservatively, focusing on just trying to survive rather than be aggressive. Although some one-on-one battles I had were tense and exciting standoffs where we both took risks, the majority of my wins came from dull, drawn-out attritional affairs where instead of feeling like I had won, it felt more like my opponent had lost. These final showdowns drag due to the fact that courses keep randomly cycling through with no end in sight--playing through 1-1 yet again doesn't make for a grandstand finish. Unlike other games occupying the battle royale space, Super Mario Bros. 35 lacks a definitive tiebreaker element that increases the stakes in order to encourage aggressive play and make late-game moments more exciting.

While much of Super Mario Bros. 35's variety is inherent due to its online multiplayer nature, there are a couple of other game modes to try your hand at--albeit with some caveats. 35-Player Battle is the main mode but throws up an early confusion. Supposedly, you cast a vote to determine the course everyone starts on--at least that's what the official Nintendo website says. In practice, pretty much every 35-Player Battle I played started on 1-1, which contributes to the game's pacing problem because things start off so leisurely. Special Battle, the other main mode, imposes unique conditions such as starting on a particular course or everyone beginning with 35 coins or a particular item. This mode encourages more aggressive play largely due to greater course variation, as starting on later courses before everyone has accumulated masses of coins whittles down the field much faster. Unfortunately, Special Battle is a limited-time mode, only available to play during specified time periods, meaning you're stuck with 35-Player Battle most of the time.

Adding to the frustration in course variety is how Super Mario Bros. 35 makes unlocking new courses needlessly slow. To be able to vote for a wider range of courses or hone your skills in practice mode, you need to have beaten the course in either 35-Player Battle or Special Battle. However, because courses cycle through randomly and repeat so frequently, you're never guaranteed the opportunity to unlock anything each round. Super Mario Bros. 35 does employ a ranking system where you unlock different player icons by leveling up, and coins accumulated each round can be spent on beginning the next round with a power-up--but they aren't particularly enticing incentives.

Super Mario Bros. 35 does offer other avenues to feel like you've achieved something, though. After winning your first round, Coin Challenge unlocks, showing you your highest coin count in a win and assigns a rank based on where you sit among other players. It's cool that Coin Challenge displays historical data too, providing an incentive to return each week to best your previous efforts and rise up the leaderboard. Additionally, Super Mario Bros. 35 tracks and charts many different statistics, including total wins, players knocked out, and how many of each enemy you've defeated. This data is a neat little extra that gives a bit more meaning to each round.

Although I can only judge Super Mario Bros. 35 on how it plays right now, it feels like it has a strong, scalable base, much like how Tetris 99 felt at launch. Super Mario Bros. 35's availability will supposedly be limited, however--at the time of writing the game will only be available until March 31, 2021. The reasons why are a bit of a mystery, but as things stand it seems like there's plenty of potential for the game to grow into something bigger with subsequent updates and in-game events.

Delivering precisely what is advertised, Super Mario Bros. 35 delivers on familiar 2D platforming with an all-new competitive twist. Playing against 34 other Marios at once is a wonderful type of mayhem, as is facing off against hordes of enemies. However, early course repetition and late-game lulls slightly temper this Mushroom Kingdom celebration of Mario's 35 years. 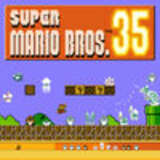 Chris ran amok in Super Mario Bros. 35 for about seven hours, getting six wins in the process, putting his many years of playing Mario games to the test.