SMB3 purists may be annoyed with some of the minor tweaks that have been made to the original game, but that shouldn't stop them from experiencing this incredible platformer all over again.

For most of the 1980s, there really wasn't such a thing as "prerelease hype" in the video game industry. But that all changed with Super Mario Bros. 3, which not only packed a strong print and television campaign in the US, but had the promotional help of The Wizard, a video-game-themed motion picture that promised frothing young gamers a peek at the next installment in Nintendo's masthead series, before its release. The hype may have been manufactured, but it turned out the game more than deserved it. It delivered interesting new tweaks to the fundamental platformer formula that the original Super Mario Bros. had staked out, and it created the single largest, most fully-realized Mario world that had been seen up to that point. Nintendo has now repackaged and gussied up SMB3 for its GBA release as Super Mario Advance 4, updating the graphics and throwing in a few bonuses. The result is a package that is, more often than not, true to the original game, which still stands up as a rock-solid platformer 14 years after its original release.

Though Super Mario Bros. 2 was wildly different from the original SMB, with Mario and company battling Wart in the dream world, SMB3 takes it back home to the Mushroom Kingdom, where Bowser's kids have turned the rulers of the seven different worlds in the Mushroom Kingdom into animals and have taken over all of their domains. It's up to Mario to kick the Koopa Kids out of their airships, restore the rulers of the different worlds, and ultimately go head-to-head with Bowser himself.

The gameplay in SMB3 is functionally the same as it was in the original Super Mario Bros.--with Mario simply trying to get from one end of a level to the other with his hide intact--though it's on a much larger scope. The Mushroom Kingdom is split up into a series of uniquely themed worlds, each of which is represented with a large overworld map. Aside from using this map to go from level to level, you can visit Toad houses, where you can earn power-ups for later use, visit spade houses for chances to earn extra lives, and inevitably encounter roving gangs of hammer brothers.

While Mario could previously only throw fireballs, SMB3 introduced the suit system, where Mario could grab special power-ups to give him special abilities. The fire flower still works as it did in SMB. The super leaf, inexplicably, gives Mario a raccoon tail, which he can use to take out enemies and, even more confusingly, fly. The frog suit makes Mario much more nimble underwater, but it reduces his mobility on dry land significantly. The tanooki suit works much like the super leaf, except that it has the added bonuses of being able to turn Mario into an invincible, but immobile, statue, and it makes him incredibly adorable. The hammer suit, the rarest of the power-ups, lets Mario toss hammers just like those horribly annoying turtle guys. All these power-ups, plus a few others that you'll use on the overworld maps, are not only useful, but bring an incredibly distinct flavor to the game, and the robust suit system remains unique to SMB3 out of all the Mario games.

Super Mario Bros. 3 could be challenging at points, but it also provided plenty of opportunities to earn loads of extra lives, which you did by collecting coins, picking up special mushrooms, playing the slot-machine-style minigames scattered across the Mushroom Kingdom, or simply by finishing three levels. Super Mario Advance 4 makes things even easier by including a Super Mario World-style save system, which means that you no longer have to play through the game in a single sitting. Veteran players might also notice that some subtle but noticeable changes have been made to certain levels. Extra blocks are added in areas where it would have previously been easier to fall to your death, and coins seem to be spread out more liberally. Truly, these are incredibly minute alterations, though they're peculiar ones nonetheless.

As if the fine, fine experience of SMB3 by itself weren't enough, Nintendo has gone ahead and thrown some sundry bonuses into the mix. Most unique to Super Mario Advance 4 is e-Reader support, which serves a few different purposes. Using special e-Reader cards, you can earn additional power-ups for use in the game, demos of the optimal way to beat a level, and, most interestingly, bonus levels. These bonus levels exist outside of the regular game path as isolated one-off levels, and they often incorporate elements from Super Mario World, including the super cape and the corner blocks that let Mario run vertically up walls, among others. These levels can be entertaining and fiercely challenging as well. The only rub with the e-Reader support in Super Mario Advance 4 is that it requires two GBAs and a link cable to work, and the whole process is both clunky and poorly explained within the game's manual.

Like all three previous Super Mario Advance titles, number four includes a version of the original Mario Bros. that can be played with up to four players. At this point, this is really a throwaway feature, and considering that most GBA owners tend to fly solo anyway, it could have been gutted without adversely affecting the package as a whole. Slightly more useful is the inclusion of a two-player variant of SMB3, where you and a friend can take turns playing the game as Mario and Luigi. Originally, Luigi was just a palette-swap for Mario in SMB3, but for Super Mario Advance 4 he's been replaced with the SMB2-style Luigi, with the taller, skinnier look, as well as the crazy leg-kicking thing while he's in the air. His abilities, however, are no different from Mario's.

Super Mario Advance 4 has made a lot of small changes of this nature to the visual presentation of SMB3. You'll notice that just about every level is now rife with SNES-style parallax scrolling, which does give the landscape a bit more visual depth. The character sprites, other than Luigi, have remained largely unchanged in design, though the whole game has had its color palette bumped up, making the Mushroom Kingdom a much more lavish-looking place. The sound design has been given a similar treatment. It makes fuller use of the GBA's synthesizing abilities, giving the original game's memorable score a richer sound without compromising those original tunes. Several of the in-game sound effects have been simply swapped out for the comparable sound effect from Super Mario World. Like in the other Super Mario Advance games, Mario has been stuck with a handful of voice samples provided by the actor that first gave Mario his pipes in Super Mario 64, which he'll use when he loses a life, picks up a power-up, and in a few other situations. And, like in the other Super Mario Advance games, these voice samples feel incredibly out of place, forcing a trait onto Mario that he simply didn't have at that point. If it doesn't bother you from that perspective, the repetition of the voice samples likely will.

Super Mario Bros. 3 was indisputably the best platformer to grace the NES and was arguably one of the best games for the system, period. SMB3 purists may be annoyed with some of the minor tweaks that have been made to the original game, but that shouldn't stop them from experiencing this incredible platformer all over again. More importantly, though, this gives players who have never touched the game before a chance to play it for the first time. SMB may almost be old enough to drive, but Super Mario Advance 4 proves that solid gameplay and inspired game design stand up well to the test of time. Though, now that Nintendo has ported all of its existing 2D Mario games to the GBA, what does this leave for Super Mario Advance 5? 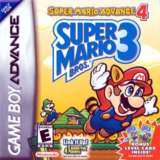