At first glance, Super Comboman looks like the kind of average action platformer that overwhelms Steam's front page. But it isn't. Rather, it's bad, and sometimes amazingly so. Nearly every success is met with an equivalent failure, and that leads to a cycle of hope and despair that perfectly encapsulates the Super Comboman experience. The art style is charming enough, as the game makes all of its characters and environments look like cute stickers, but the animations often fail to load, leading to visual clutter and confusion. Some of the music is amazing, but it wears on you when it loops every 30 seconds or so. And perhaps most damning, Super Comboman occasionally makes you feel incredibly powerful before doling out some excruciating forearm cramps.

The strange, almost dualistic nature of Super Comboman is clear from the outset. The star is Struggles, an out-of-work comic book geek desperate for some cash to help with his mortgage. To make a bit of money, he sets off with his sentient fanny pack in the hopes that he can one day learn how to fight as well as his hero, the eponymous Super Comboman. Immediately, there's an awkward clash between heavy poignancy and camp that ultimately drifts off into a nonstop barrage of groan-inducing Internet memes.

After that introduction, you're thrust straight into the heat of combat and taught how to string together attacks and combo like a pro. At first, you have a few basic moves, such as light and heavy attacks. For the most part, these are functional and help you juggle foes or slam them through a brick wall, but when the action gets going, the cracks in the foundation become too big not to notice. Even under the best circumstances, you can only ever attack in one or two directions, though you often have foes attacking from several elevations in addition to being in front of or behind you. Escape is tough, because it opens you up to other attacks, which can put you in an animation cycle that ends only when you die.

Guarding can help, sometimes, but more often than not enemies just wear you down and kill you. Your only recourse is to parry attacks, which is done by tapping forward. Even that comes at a cost, namely your stamina. With most incoming attacks, a small bubble appears that alerts you to a parry, or at least that's how it's supposed to work. Sometimes there is so much happening onscreen that you just blindly tap forward so you can parry any incoming attack and avoid nasty animation locks. That's fine for a while, but it doesn't take long for that tactic to get exhausting. Add that to the constant flurry of attacks, blocks, and dashes that you perform, and on some levels, your forearms will be cramping inside of 10 minutes.

If you can defeat enough foes, you steadily earn a bit of cash, which you can spend on more-advanced attacks that are supposed to help rack up damage a bit more quickly, but they're really tough to pull off thanks to input lag. Every once in a while, everything lines up just right, and you can perform really slick combos that feel amazing, but those moments are far too rare and end all too quickly. In a game like this, boss fights should be a full test of everything you've learned up to that stage--tough, but ultimately empowering. Instead, I found that the best option was simply to double-jump in, use one attack, and then jump back out before I took a hit. The bigger, fancier moves Super Comboman tries to encourage are especially risky when facing off against a particular baddy that can knock away half your health with one good shot. Ultimately, combat is far and away more aggravating than fun.

Combos also bring up a smooth-voiced announcer that says things like "Noobtastic," "Scrubtacular," and "Smizzle" when you've performed combos that exceed five, 10, and 20 hits respectively. While the exclamations warrant little more than a dry smirk the first time, given that the game is based on performing combos as many times as humanly possible, the constant audio feedback quickly becomes mind-numbingly obnoxious. It's also representative of the kind of grating humor that pervades the entire game. Some of it can be offensive, depending on your sensibilities. I recall one enemy that's meant to represent homeless men, and after he attacked by flashing his penis offscreen, I couldn't help but think Super Comboman was presenting and reinforcing some of the worst stereotypes of the homeless with a touch of snarky homophobia. That crass and sophomoric humor runs throughout and is usually a miss.

Nearly every success is met with an equivalent failure, and that leads to a cycle of hope and despair that perfectly encapsulates the Super Comboman experience.

Platforming is just as awful. Super Comboman often transitions from large open areas to cramped vertical segments. To manage the transitions, the designers opted for long vertical tubes that rely on several successful wall-jumps in quick succession. What makes that problematic, though, is that the wall-jumping here is terrible and without qualification the worst I've ever seen in any game. Wall-jumps are typically difficult maneuvers, sure, but game designers have found many ways to make them simple enough to be doable for average players. Mega Man X lets you slide gently down and jump at your leisure, while the Metroid series requires you to properly time only a few button presses and automates the rest.

Super Comboman gives you no such help. You need to jump toward a wall and then quickly switch to moving out and away. The problem here is twofold. With the game's input lag, it's almost impossible to get that timing right consistently, and without a system like that of Mega Man X, where the game gives you a larger window to make that jump, platforming comes off as ludicrously frustrating. It's made much worse in some timed segments where obstacles and enemies are placed in front of you, and failure means an instant death. That is punishingly, brutally hard for absolutely no reason. After several runs, I found no consistent pattern for what let me succeed and what caused me to fail. Sometimes the enemies would lock me in one of those animation loops and I'd be dead before I could react. At other times I seemed to do everything wrong and still make it through. With levels like this, Super Comboman made me feel like my success was arbitrary and completely divorced not only from my actual level of skill, but also from what I'd managed to learn and ultimately apply within the game.

Super Comboman is severely flawed, but buried beneath controller-snapping frustration is a game that with some control tweaks, less lag, and some bug fixes could have been enjoyable. Sadly, in addition to its numerous deficiencies, it is riddled with annoying bugs that keep the camera from focusing on you or that prevent your character sprite from loading at all, though to the developer's credit, patches have been frequent. Nonetheless, Super Comboman is still a frustrating mess that's more likely to cause wrist injuries than it is to inspire cries of platforming joy. 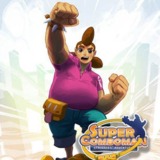 Dan Starkey is no stranger to hard games, fighting games, or beat-'em-ups, but he could only barely make it through Super Comboman. He's glad he can finally put this cramp-inducing nightmare behind him.