One of the best early Castlevania games is available on the Virtual Console, and it still packs a decent bite.

These days, the Castlevania franchise is split in two: a middling series of 3D action games on the PlayStation 2 and an excellent line of Metroid-style castle romps on the Nintendo handhelds. But back in the day, Castlevania was a single series of diehard action platformers with a uniquely ghoulish theme. One of the best iterations of the early series, the Super Nintendo Entertainment System's Super Castlevania IV, is now available on the Wii's Virtual Console service. For your 800 Wii points, you get a sequence of visually interesting levels in which to battle a whole bunch of monsters in your quest to vanquish evil. It's a tough but satisfying action game that will probably make you remember how tough games used to be, which made up for their relatively short durations.

The plot is suitably concise: You're Simon Belmont, and you have to kill Dracula. Again. To do that, you'll have to whip your way through a whole bunch of skeletons, bats, zombies, gargoyles, and other denizens of the night as you walk ever to the right to reach the prince of darkness's castle and face him in single combat. Castlevania IV sticks closely to the early conventions of the series: You whip candles to find hearts, food, and such power-up weapons as an axe, a boomerang, holy water, and a pocket watch. The game introduced a number of new gameplay twists when it debuted on the Super NES in the early part of that system's life. You could finally whip in eight directions or hold down the attack button to swing the whip around in a circle. There were also grapple points in some levels that you could whip onto and then use to swing across chasms. These mechanics haven't been seen much in later installments, where weapons besides whips were used more prominently, so it's fun to go back and mess around with them.

Back when it came out, Castlevania IV had a great art style, imaginatively themed levels, and some killer use of Mode 7, the SNES' infamous 2D graphics rendering effect that helped make game environments much more dynamic. And the latter is still intact because the emulation in this version is flawless. There are some highlight moments, such as the sequence in which you have to jump from one gigantic, swinging chandelier to the next. Another area has you in a room that's slowly rotating, requiring you to swing from a grapple point to get to the next platform as the room rights itself, without falling into one set of spikes or another. A later level is filled with sparkling jewels and gold treasure, which literally splashes under Simon's feet. It's a fun game to look at and play through, thanks to its pleasant variety of ghastly enemies and colorful locales. The game also boasts some great music to help propel you through your arduous journey.

Like most action games of the era, Castlevania IV isn't very long, but its sometimes punishing difficulty makes up for that fact because you'll probably end up playing through several areas more than once before you make it to the end. You never know when a medusa head is going to come out of nowhere and knock you off that platform into the abyss. Oh, and was that your last life? And you were just about to make it to the boss? Sorry, it's back to the beginning of the area for you. If this scenario sounds familiar, and you don't mind plunging ahead anyway, Super Castlevania IV is probably a worthwhile download for you. 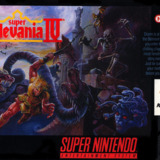 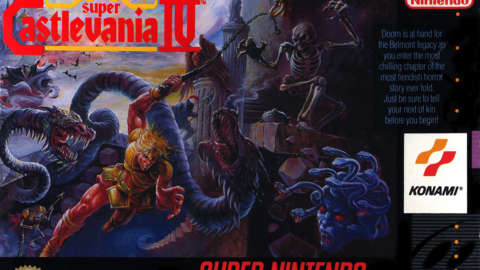