It’s been several years since we last saw Bomberman, but if ever there were a perfect time for the bizarre little bomb-crazy robot to make a comeback, the Nintendo Switch launch is it. Long beloved as one of the greatest multiplayer party games, Bomberman’s classic, simple premise is a perfect match for the Switch’s focus on social play.

Super Bomberman R holds on tightly to its roots, with entirely familiar controls and gameplay. For most of the game, you run around a small maze, moving in four directions, planting or throwing bombs to dispatch your enemies. Destroying certain blocks can reveal power-ups that enable you to toss more bombs in a row, increase damage and speed, and change the bombs into different forms. Meanwhile, power-down pickups can reverse effects, which lowers bomb damage and the number of bombs you can throw.

The golden rule of Bomberman is simple: Don’t get blown up. The meat of the game is the multiplayer--and, thankfully, the developers at Konami and HexaDrive didn’t skimp here. Making natural use of the Switch’s Joy-Con controllers, local play allows up to four to gather around the portable screen--or eight when playing on a TV. If you don’t have enough players available, however, there’s also online play for up to eight combatants.

Online multiplayer works well most of the time, but there are occasional moments where the action feels sluggish and unresponsive, as if Bomberman is trudging through mud. While this is a sporadic issue, it's noticeable enough that it begs for a fix. Thankfully, when matches run smoothly, playing online is still enormously enjoyable and competitive in both ranked and unranked matches.

Since each player only needs one Joy-Con to play, Super Bomberman R makes for a highly convenient two-player game. There’s a wide range of battle maps available right from the start, and eight different Bombermen (and Bomberwomen) are available. Points earned while playing can be used to buy even more characters and arenas, and you can even buy headgear to customize your little bomber.

There’s a surprising amount of variety in missions goals over the course of the story mode’s five uniquely themed planets.

Super Bomberman R also includes a story-based campaign that supports drop-in two-player co-op. More than 50 levels of bombing action are backed up by an amusingly goofy story of the Bomberman Bros. stopping the nefarious plot of the Evil Emperor Buggler and his dark bombers. There’s a surprising amount of variety in missions goals over the course of the story mode’s five uniquely themed planets.

While the majority of levels simply focus on destroying a certain number of enemies, other missions cleverly task your bomber with rescuing citizens, finding keys and switches, or surviving endless enemies for a certain period of time. Maps are frequently multilevel as well, which can heavily affect how bombs explode above or below. Bomb blasts can travel over ramps, for instance, but they won’t work across gaps or drops.

The last two levels of each planet revolve around boss battles. The first is a straight-up maze battle, where you must hit your foe with a single blast. The bosses are tricky, however, and seemingly always know the exact right spot to stay in to avoid blasts, so these sections can be surprisingly challenging. The second part of the battle takes place against a giant robotic version of boss in an open arena. The goal is always to use bombs to hit weak spots in order to stun the boss--and then inflict major damage to a central part of your foe.

The bosses, like the rest of the game, are colorful and well designed. Super Bomberman R is slightly modernized, done up in a distinctly retro 3D look. It’s charming, but it’s not overly impressive visually, though the sound effects and score (including J-pop vocal tracks) are a lot of fun. Putting a Bomberman game fully in 3D isn’t necessarily new, but the use of an isometric perspective instead of a top-down view does cause some issues.

The heart of the game--the battle mode--is a welcome retro rush, and decades since the franchise debuted, it’s still one of the best party games around.

At times, this perspective (and the active camera that goes with it) makes it hard to discern gaps, blockers, and minor elevation changes on a map, which can be frustrating when trying to flee enemies or bomb blasts. Your little robot can frequently be obstructed by the huge bosses as well, resulting in instant deaths simply because a giant robot leg blocked your view.

In almost every respect, Super Bomberman R plays it safe with its tried-and-true formula. The story mode is short (less than two hours at most), but fun with some creative boss battles and plenty of nostalgic throwbacks. The heart of the game--the battle mode--is a welcome retro rush, and decades since the franchise debuted, it’s still one of the best party games around. 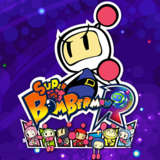 Jason D’Aprile has been blowing up robots for as long as Bomberman and spent about five or so hours on Super Bomberman R. He was provided with a complimentary copy of the game by Konami.