The game introduces a few clever concepts, but its length and the gameplay flaws significantly limit the game.

The popularity of the Star Wars franchise has helped LucasArts create a broad range of marketable products, from toys and clothing to numerous video game releases. The latest genre in the gaming world to receive the Star Wars treatment is kart racing, in the form of Star Wars Super Bombad Racing. Considering that virtually every major property, including the Looney Tunes and Disney characters, has appeared in kart-racing games, it's surprising that it took this long to see a Star Wars-licensed game in the genre. Lucas Learning's Super Bombad Racing has uniquely designed and often difficult levels and an appealing cast of Star Wars characters. But several flaws, including loose controls and repetitive gameplay, keep it from being a truly enjoyable kart racer.

Star Wars Super Bombad Racing has three primary gameplay modes: race, teams, and arena. In the race mode, you can take part in all nine of the game's levels and the final grand challenge, where the nine races must be completed in succession. In the team mode, teams of two compete in four-player races. Whichever team gets a player over the finish line first wins. As the name suggests, the arena mode pits players against each other in large multilevel arenas filled with power-ups, and the last character standing wins. In both the race and arena modes, power-ups such as boost gadgets, force field gadgets, photon blasts, tractor beams, and energy balls are readily available. In typical kart-racing fashion, each character has his or her own special attack. However, there are some inherent flaws with both the arena and race modes of play.

The primary drawback in the race mode is that the power-ups aren't crucial to winning the race. None of the attacks are effective enough to have any significant impact on the races--success is often achieved through finding the best shortcuts and driving flawlessly. This plays against one of the primary attractions of kart racers, the enjoyment of blasting away at your opponents in multiplayer races. Super Bombad Racing takes away that element of malicious interaction and ends up on the side of being a straightforward racing game. On the other hand, the problem with the arena mode is that the playable areas themselves are entirely too large. In four-player deathmatch games, you can easily hide out in a nondescript tunnel and let the other three players battle it out until the very end. Compounding the gameplay woes are the loose controls. Because the races are run on spaceships and hovercrafts, the vehicles tend to float around a lot and take wide turns. This can be alleviated by constantly pressing the jump button around corners, but the handling certainly takes some getting used to.

Part of Super Bombad Racing's charm lies in its creatively designed courses. The first few levels, such as the Naboo Swamp and Theed City, are generally uninteresting and monotonous, but the later levels, such as the elevated city of Coruscant and the insanely difficult and often confusing Droid Control Ship, are enjoyable to race and master. In the later levels, the game's courses become multileveled in design. Particularly in levels such as the underwater Otoh Gunga course, you can race on multiple levels to find the best shortcuts. Throw in the power-ups and the general lack of directional signage on the tracks, and the levels become very challenging. It's usually necessary to race the courses a couple of times before you can race to win.

Visually, Super Bombad Racing is solid, yet unspectacular. It's disconcerting at first to see such stoic characters as Darth Maul and Obi-Wan in their bigheaded cartoon-style forms. However, subtle nuances such as Jar Jar Binks' juvenile taunts and Darth Maul's incessant boasting about the might of the Sith become endearing after time. As mentioned previously, the level design in Super Bombad Racing is truly exceptional, particularly considering the genre, but the graphical quality of the courses isn't quite as impressive. The draw-in distance in most of the levels is rather generous, as the courses extend to the horizon. However, the textures on several environmental elements are flat and sparsely detailed. Also of note are the fluctuating frame rates, particularly in the multiplayer modes. In single-player races, the frame rate drops aren't as noticeable, but in the four-way split-screen mode, the frames per second can slow to a crawl at times. This detracts from the experience greatly. Regardless, the environments in the game are bright and vividly colored, which should appeal to the game's target demographic of younger gamers.

The gameplay has certain quirks, but the fast pace and multilayered levels help alleviate some of those shortcomings. The graphics are relatively unglamorous when compared with those of other PlayStation 2 games, but the vibrant and colorful look plays to the accepted visual norms of the genre. However, when the soundtrack tries for the same type of genre appeal, it comes off sounding overstated and ultimately unexciting. Familiar themes from the original Star Wars trilogy and The Phantom Menace are mangled into horrific remixed concoctions.

Star Wars Super Bombad Racing can be entertaining, particular in the latter stages. The game introduces a few clever concepts, but its length, with only nine playable courses, and the gameplay flaws such as the ineffective power-ups, loose controls, and the unnecessarily large multiplayer arenas significantly limit the game. Super Bombad Racing fills a niche that has been relatively neglected on the PlayStation 2, but it is only recommended for avid kart-racing fans.

View Comments (0)
Back To Top
6.2
Fair
About GameSpot Reviews 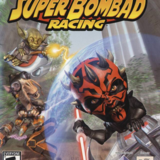 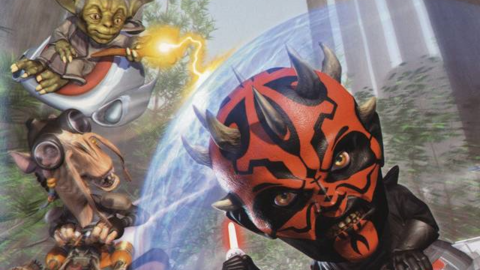 The game introduces a few clever concepts, but its length and the gameplay flaws significantly limit the game.