Take me down to the Sunset City where the monsters are green and the carnage is pretty.

If you're worn out on games with drab palettes and dramatic characters, then Sunset Overdrive is just the game you need to lift your spirits. It's dripping with color and upbeat personality, and its cast is filled with comical caricatures. Sure, its dialogue is vulgar and absurd, but unlike so many games that attempt to be edgy, Sunset Overdrive makes its quips feel natural rather than forced. It never takes itself too seriously, which in this case, is a good thing. It's also a blast to play thanks to it's movement system and over-the-top weapons. It's a liberating game that trades in rules and drama for freedom and pure unadulterated enjoyment, and Sunset Overdrive never pretends to be anything but an excuse to swear like a sailor, jump off of a skyscraper, and blow up a gang of monsters.

As you'd expect, an absurd game like Sunset Overdrive features an equally absurd plot. It's the end of days after the evil energy drink corporation, Fizzco, poisoned the citizens of Sunset City, turning them into violent rage beasts known as OD. On one hand, that means you need to fight your way out of the city, on the other hand, that means you get to fight your way out of the city. As a janitor that's been taken advantage of by Sunset's hedonistic jerks in the past, it's finally your turn dish out the pain, and you get to do it with an over-the-top selection of powerful and ridiculous weaponry.

Before your crusade kicks off, you create a character of your choosing using the character customization system. There's a great variety of options to choose from, but should you grow bored with your character, you're free to go back to the drawing board at any time and revise your appearance. Over the course of your journey, you team up with small factions of survivors to devise your escape plan, and along the way, you go toe to toe with hundreds of monsters, Fizzco robots, and enemy humans known as scabs. Each faction you fight alongside sticks to a theme: there are the lazy, rich, preppy kids, a scout troop, and a gang of LARPers, to name a few. Though the factions' characterizations are slightly mocking and exploitative of the groups they represent, there are also plenty of times when representatives from each group call out and mock the stereotypes that are so often applied to them, striking a respectful balance.

Make no mistake, however: Sunset Overdrive is immature on all fronts. Nearly every character swears up a storm, dropping f-bombs like it's going out of style. Thankfully, unlike many games that take this approach, their foul language feels natural and it reinforces the brash attitude that permeates the game. Largely, the voice actors behind the game's cast do a commendable job of selling their roles. You'd think that everything would be colored by a hint of doom and gloom given the situation at hand, but the survivors you meet seem to take it in stride, giving the game a lighthearted and irreverent quality that's rather uplifting.

Sunset Overdrive is one of the best looking games on the Xbox One, both on a technical and artistic level. The city itself is large, dense with buildings and artifacts, with plenty of variation in architectural style. Everything's coated in a bright, saturated coat of paint, giving the game a cartoonish quality that's easy to love. When you're in the midst of battle, sometimes with what seems like a hundred enemies, the screen fills with explosions, bursts of lightning, and occasionally bright green ooze. Despite all of the chaos on screen, the frame rate remains rock solid. Sunset Overdrive isn't meant to look realistic, but that doesn't disqualify it as a top contender for the best looking Xbox One game. It's simply beautiful to behold.

Of course, when you're zipping across town, you're going to miss a few of the finer details, but you'll be having too much fun to care. One of Sunset Overdrive's primary delights is its mobility system, which is loose and flexible in the name of enjoyment. Nearly every object and surface is an opportunity to gain ground, which makes it easy to travel great distances with speed and grace. You can grind along most objects, including telephone lines, ledges, handrails, and the like. Cars, awnings, and exhaust ducts act as trampolines that send you skyward, allowing you to work your way up and over buildings with ease. You can also wall-run indefinitely and, eventually, dash in mid-air and run atop bodies of water.

The only downside to the emphasis on movement is that if you find yourself standing in place in the middle of combat, you're going to be punished. It's easy to become overwhelmed by dozens of enemies at once if you're fighting while stationary, and they can quickly whittle away your health. There are times when your instincts tell you to fight rather than flee, but despite your best intentions, this is rarely the right decision.

Stringing movements together not only gets you to your destination safely and quickly, but it exemplifies what Sunset Overdrive is all about. Sometimes you slightly miss your target, but that's OK, because the game's very forgiving when it comes to timing and aiming. Once you get the hang of each move, you can free-run from one end of the city to another without ever touching the ground. The more tricks you use, the more style points you earn. As you fill up your style gauge, you activate elemental and stat boosts that make you more effective in battle. These "Amps" can be applied to you or your weapons, and are purchased with collectibles that are strewn throughout Sunset City. Similar to the open world game Crackdown, you have to explore every nook and cranny of the city to find them, but you can make it easier on yourself by purchasing maps for each type of collectible.

Sunset Overdrive never pretends to be anything but an excuse to swear like a sailor, jump off of a skyscraper, and blow up a gang of monsters.

As you perform certain actions, such as grinding, using automatic weapons, and air dashing, you earn badges that can be traded in for overdrives. Overdrives are another form of upgrade, which are similar to amps, but they're earned a different way. They can be applied to your character to increase style-point generation, boost weapon strength, or grant you health augmentations. Between Amps and Overdrives, there are a seemingly endless number of ways to upgrade your character and remix their strengths. If you want to explore the full range of options, you're going to spend a lot of time gathering collectibles, and even more time generating badges to unlock the best Overdrives.

Like the movement system, Sunset Overdrive's weapons are wild and varied enough to keep you entertained well beyond the end of the main mission path. Unlocking some weapons requires an absurd amount of the game's energy drink currency to unlock, and your best bet to earn them is to tackle the large selection of side missions, or to replay old missions for better rankings. You take aim with the likes of an acid sprinkler, a bowling ball cannon, an explosive teddy bear launcher, and a gun that bombards enemies with fireworks and illusionary Chinese dragons. Sometimes it's hard to choose which weapons to bring into battle, not because you need specific equipment, but because there are so many great options to choose from.

Unfortunately, one of the few issues with the game is its selection of mission types. For a while, it feels like all you're doing are fetch quests. Someone needs supplies and they need you to go get them. It definitely helps that moving and shooting are so fun, but you still pine for something different after the dozenth fetch quest in a row. Give it time, however, and you'll eventually discover a wide variety of challenges, including a hefty dose of traversal challenges and combat scenarios to keep you busy and beef up your resources.

There are also more than a few great boss battles that challenge your ability to act quickly and move effectively, and these are some of the best moments in the game. Just when you think you're on the verge of boredom, an over-the-top mission appears, reigniting your enthusiasm. If you've always dreamed of taking on a massive inflatable mascot, similar to the Stay Puft Marshmallow Man from Ghostbusters, there's a boss battle for that. Maybe you've wanted to chase a train by grinding on rails, or you have a burning desire to ride on the back of a massive dragon that's winding through a vast cityscape. It's not that there's no fun to be had in Sunset Overdrive's typical missions, but the imaginative and surprising boss fights provide an enjoyable and taxing challenge.

You can freely replay any mission at a moment's notice, but eventually you'll want to jump online and screw around Sunset City with your friends. Hop into the Chaos Squad booths around the map, and you and a team of seven other warriors can tackle horde-like throngs of enemies, defend outposts, and put your traversal skills to the test. Sunset Overdrive emphasizes cooperation, but team members are awarded for their individual performance. Throughout the course of the game, you fight alongside computer-controlled warriors, but they're mostly useless fodder. In Chaos Squad, you're working with other tricked out players that are capable of zipping to-and-fro with a cache of arms at the ready. It feels like you're part of a stylish, amoral Justice League. Unfortunately, the difficulty of co-up doesn't scale based on the number of players in your party. With fewer than eight people, some Chaos Squad challenges are simply too hard; with fewer than four, you're almost always asking for trouble.

Insomniac Games has crafted an excellent game in Sunset Overdrive. It's not without a few niggling issues, but you'll be too busy enjoying yourself to care. You can compare it to games like Crackdown, Tony Hawk's Pro Skater, and Ratchet and Clank, but by combining the best elements of those games into a single package and injecting it with an anything goes, rock and roll attitude, you'll never think of it as anything but a singular achievement that stands tall on its own merits. It's one of the best games on the Xbox One, and a refreshing shot of merriment.

View Comments (1130)
Back To Top
8
Great
About GameSpot Reviews

Peter blasted his way through the main mission path, taking the time to dabble in side missions and multiplayer matches along the way. 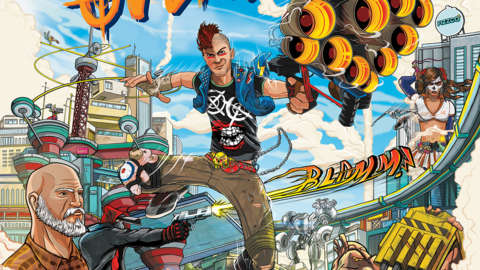 Sunset Overdrive is an always changing, open-world game set in the not-so-distant future where a catastrophic event has left your city overrun by mutants.