Suikoden II brings nothing new to the genre, but it executes well enough that no one will really care.

Because the original Suikoden was one of the first PlayStation RPGs to grace the US shores, it garnered more attention than it deserved. Despite being a respectable enough RPG, Suikoden was a relatively shallow, quick-play RPG that was light on content and heavy on combat. Suikoden II addresses a number of the problems of the original Suikoden, and although it feels somewhat rehashed, it still holds its own nicely in today's cutthroat RPG market.

Suikoden II takes place several years after the first game's revolution, a time when the evil Highland empire is terrorizing the innocent, burning their villages by the handful to satisfy the bloodlust of the maniacal Prince Luca Blight. You hop into the medieval-styled britches of an idealistic young imperial rebel who is out to right the wrongs of the world. To help you defeat the evil prince, you'll have a bit of ancient magic and an army of friends. Sound familiar? Suikoden II's story mirrors that of many other RPGs, but it adds a few twists all its own for good measure. While RPG purists were disappointed by the lack of development of the first game's myriad characters, Suikoden II focuses fairly heavily on character development, preventing party members from turning into mere power-up satellites. The game still retains the quest to collect the 108 stars of destiny from the first game, but many of the characters serve more use than, say, welcoming the player to Toran Castle. The game's sense of scope is impressive, encompassing a huge world war and letting players build and staff their own castle.

Basic gameplay is very similar to that of the first game - your party can hold up to six of the game's many characters, each of whom has his own attacks, spells, etc. One of the cooler features of Suikoden's battles was the unite ability, which let two or more characters combine forces for a super attack. Suikoden II emphasizes these one-two attacks, giving players more of an incentive to experiment with new characters. Unlike those of some RPGs, Suikoden II's random encounters are quick and relatively painless - load time from the overworld or dungeon is almost nonexistent, and characters usually attack all at once, preventing the game's battles from being too big of an annoyance when one simply wants to advance the story. Magic, gained from rune crystals found throughout the world and in stores, earns experience similar to Final Fantasy VII's materia system, opening up more spells as you advance. Suikoden II doesn't use magic points; instead, it gives you a set number of uses for each spell per outing, making it one of the least magic-intensive RPGs on the market, another welcome break from the current trend.As was the case with its predecessor, it feels as though an international conflict just can't be fully realized in Suikoden II without some large-scale battles. Instead of the strategy-free battle scenarios of the original, Suikoden II adds an actual strategic element to the game's battles. The end result can easily be likened to the TurboGrafx-16's classic, Military Madness - you position your units on a map and tell them to attack enemy units, defend, or use magic. These scenarios are far more interesting than the almost instantly winnable scenarios in Suikoden, but they still don't amount to much more than filler minigames, and many victories and defeats are determined by the game's story alone. While it's a minor point, some players will think they're winning and but then be forced to withdraw because of some random story event.

Aesthetically, Suikoden II is a few notches above its predecessor. The graphics are displayed in a noticeably crisper resolution than its predecessor. The game's town and overworld are entirely 2D and sprite-driven, while the battle engine combines polygonal terrain and spell effects with 2D characters. Brief CG cutscenes are sprinkled throughout the game, as well, bringing a little more life to scenes that just wouldn't have carried the same impact with simple 2D spritery. Nice hand-drawn portraits are shown for all the game's notable characters, as well. Even though the overworld graphics are beyond bland, the overall effect is an appealing one. The game, despite increased graphical detail, has little to no load time to speak of once you're in the game, an always welcome bonus. Suikoden II's sound is on par with the original's, sporting well-instrumented RPG fare, occasionally flaunting a vocal twist. The game's sound effects are nice and crisp, containing actual digital samples instead of the screechy synth noises of even Square's most expensive endeavors. The game's translation fares far better than the first title's did, overall. However, the competent text was obviously rushed through proofreading, marring what would otherwise have been a perfect translation. Fortunately, other than the text, nothing has been localized for the US version - characters actually drink alcohol, not soup or coffee, as many characters were forced to drink due to the heavy-handed censors of the Nintendo era.

Fans of the first Suikoden game will love the sequel - it improves on everything that had made the first game memorable. Suikoden II brings nothing new to the genre, but it executes well enough that no one will really care. 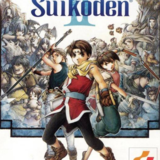