Sudden Strike II is a classic example of how to make a real-time strategy game and then completely undermine it with a bad user interface.

World War II is a very popular setting for games these days, from first-person shooters like Medal of Honor: Allied Assault and Battlefield 1942, to mods like Day of Defeat, to adventure games like Prisoner of War. However, with the exception of one of Empire Earth's 14 epochs, Russian developer Fireglow's Sudden Strike games are the only traditional real-time strategy games with a World War II setting. So it's all the more disappointing that Sudden Strike II has all the weaknesses of its predecessor with only a few improvements.

Although the Sudden Strike games play like traditional real-time strategy games, they depart from the standard RTS formula in a couple of important ways. Like in Bungie's Myth series, there's no building or economic management, so you're free to concentrate solely on battle tactics. Some scenarios are scripted to provide reinforcements as you play, but you're usually dealing with a fixed number of units in your effort to accomplish your objectives. Another important difference is that historical vehicles are modeled, so instead of broad definitions like light, medium, and heavy tanks, you have very specific units like PzIII Type Gs and M4A4 Sherman Vs. There are artillery units of different caliber, various antitank guns, transport trucks, jeeps, and even motorcycles for reconnaissance. There are at least a dozen different types of infantry, some with special abilities like healing, laying mines, or extending your line of sight with binoculars. In addition, Sudden Strike II has a few features that seem conventional to real-time strategy games, even though they're completely unrealistic, such as the hospital trucks that heal your infantry and repair trucks that repair and rearm your vehicles.

The first Sudden Strike title had a number of historical trappings, but it didn't go very far toward encouraging historical use of them. A bunch of riflemen could chip away at a Tiger tank's hit points until it blew up. But this time, the developer made more of an effort to model realistic factors like armor penetration (those riflemen won't have as much luck against Tiger tanks this time around), morale (it fluctuates between a bonus or a penalty to unit combat values, depending on the situation), and line of sight (the game has fairly complex rules about range and facing, depending on factors like whether a tank is buttoned up, whether an infantrymen is prone, and on which floor of a building a soldier is standing).

Unfortunately, Sudden Strike II doesn't fix many of the problems from the first game. The interface puts an emphasis on showing as much of the map as possible at all times. This would be an admirable goal if it didn't mean sacrificing important information. There's no indication of a unit's range, firepower, or armor. You have no way of telling which units are more powerful than others. It's bad enough if you don't already know a Sherman from a Pershing, but even a World War II hardware buff will have to simply guess at the difference between a Texas rifleman and a British gunner. When you drag-select a group of units, there's no indication of who is in your group, so you'll often send vulnerable units such as trucks, medics, engineers, and officers directly into combat by accident. In fact, the only way to find out which unit you've selected is to hover the cursor over it. This is bad enough with moving vehicles, but it's next to impossible trying to pick out a 10-pixel infantryman running among trees. Since infantrymen are so difficult to tell apart from each other, you'll spend a lot of time sorting them out with your cursor and assigning them to groups. This is all ultimately futile, since the pace of combat is such that by the time you realize your men have come under fire, they're dropping like flies faster than you can tell them to go prone, scatter, or take cover.

Keeping your units together is made even more difficult by Sudden Strike II's awful pathfinding, which is just as bad as the first game's pathfinding. Units will take the long way around to reach a destination. They'll sometimes get stuck on the terrain or simply not respond to commands. Infantrymen will stand in front of an oncoming train and get run over. Units told to cross a bridge will get so hopelessly jammed up that sorting them out is like trying to untie a wet knot. There aren't any formation options, and even the command for all units to move at the same speed does a poor job of keeping them together. Then there's the frustration of trying to control aircraft, which uses a completely separate system of ordering missions, setting waypoints, and waiting around.

The bottom line is that Sudden Strike II, like its predecessor, requires a lot tedious micromanagement with precious little help from the interface. Playing the game well involves fiddling around with unit facing, vehicle crews, and aircraft missions. You have to button down tanks, tow guns, assign vehicle crews, and manually order men to go prone. You have to lay mines (three different kinds), heal wounded men, pick your officers out of the crowd, and arrange them in buildings. It's like the worst parts of micromanaging the tiny infantry units in Westwood's original Commander & Conquer have been made into an entire game.

To its credit, Sudden Strike II looks great, even when it's unwieldy. The 2D art and animations are top-notch. Although the game can look a bit cluttered, there's no denying that it presents some thrilling battlefield scenes, with men running across beaches to storm bunkers with aircraft zooming overhead and tanks bringing up the rear. In city environments, buildings burn and collapse. There are effects like splashing water, explosions kicking up dirt, and black smoke. The sound effects are also very good, from crackling machine gun fire to thudding artillery and clattering tanks. Eventually, you can tell what kind of units are fighting by the sound of their guns. If the accents weren't so uniformly awful, even the briefings and unit acknowledgements would be pretty good. It's a shame that such good-looking graphics are undermined by such a poor user interface.

The campaigns in Sudden Strike II are an improvement on the previous game's campaigns. There's a campaign for each of the major combatants in World War II, with the introduction of the Japanese, who weren't present in the previous game. But with only five missions, the Japanese campaign seems like an afterthought. Some missions are interconnected, playing on the same map with persistent damage carried over. The objectives are varied enough that you're not always attacking against overwhelming odds--there are also a lot of defensive situations in which you have to hold off waves of attackers. Unfortunately, the AI seems completely scripted, with no adaptive behavior, which would explain why there's no skirmish mode and why you can't include the AI in multiplayer games.

If the pace were more manageable and the interface were more helpful, Sudden Strike II could have been an interesting combination of history and real-time strategy. The engine is certainly up to the task, and the developers have a handle on how to make an interesting scenario. But unless your idea of a good time is herding soldiers, Sudden Strike II is a classic example of how to make a real-time strategy game and then completely undermine it with a bad user interface. 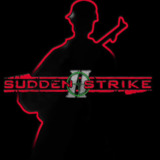