The game's slow pacing, simple combat, weak production values, and other shortcomings collectively prevent it from being much fun.

Despite its seemingly unusual premise, Submarine Titans is a rather conventional 2D real-time strategy game that takes place in an underwater setting. It features three different playable factions and several interesting units and technologies, as well as a complicated and fairly original resource model - and of course, the aquatic setting itself. However, the game's slow pacing, simple combat, weak production values, and other shortcomings collectively prevent Submarine Titans from being much fun.

You play Submarine Titans from an isometric perspective, as with most any other 2D real-time strategy game. An interface bar covers the bottom portion of the game screen, and while it's obtrusively large at the lowest resolution setting, Submarine Titans supports resolutions up to 1280x1024, in which there's plenty of room to see what's happening. The interface is split down the middle, and it lets you oversee base infrastructure and unit micromanagement simultaneously; it's an effective design, although the interface buttons themselves aren't intuitive, nor are the names and appearances of the various structures and submarines that you can build at any point. In fact, sometimes it's very difficult to identify a submarine amidst its surroundings, as the structures and submarines are drawn with the same exact colors, which tend to blend together. Otherwise, Submarine Titans' 2D graphics are fairly detailed, and the copious amounts of undersea life scuttling about lend a lot of detail to the environment, but you'll just as quickly realize that almost all the maps in the game look identical. And furthermore, the game doesn't really provide a good sense of being underwater, because sea creatures and a sea-color tint aren't enough - some sort of shimmering or color-cycling effect would have helped convey the sense that Submarine Titans actually takes place under the ocean.

Submarine Titans has a very steep learning curve, partly because the interface and technology take getting used to, but especially because the single-player campaign missions are very difficult from the outset. Each of the game's three different factions has its own ten-mission campaign, and you can play the campaigns in any order. Even though you can toggle the level of the computer artificial intelligence, Submarine Titans will initially prove to be much harder than most similar real-time strategy games, even on the weakest setting. Some players will doubtless appreciate the challenge, but most will sooner find the campaigns to be unbalanced - either way, the campaigns certainly aren't very interesting. Though Submarine Titans has an elaborate back story that's detailed in the manual, each mission is introduced simply with scrolling text and a plain voiceover. These introductions are usually long and not very clear, while the actual mission objectives tend to be either predictable defense- or offense-oriented scenarios or escort missions. Fortunately, you can also play single scenarios against one or more computer opponents or take on other players over a network or the Internet. Submarine Titans also includes a seperate scenario-editor program with a random-map generator.

The game's three playable sides - the militant White Sharks, the scientific Black Octopi, and the mysterious alien Silicons - aren't as different as their stories make them out to be. The former two are functionally identical with the exception of their slightly varied technology trees, while the latter one uses a different resource model and has different types of military submersibles. Part of the problem is that Submarine Titans simply lacks character - the unit-acknowledgment speech clips used for each side are not only repetitive and boring, but also identical for every unit in the faction; similarly, each unit in the game blows up in just the same fashion when it's destroyed. The graphics and design of Submarine Titans are clearly derivative of Blizzard's hit Starcraft, even though Starcraft did a much better job differentiating its three factions. Ultimately, each side in Submarine Titans has analogous structures and defenses, but since they look different - and none of their functions are immediately obvious - it'll take you a while to figure out how to play the game.

Submarine Titans has three playable tutorials, one for each side, but all of them are tediously slow and are not very useful. They simply walk you through laying down base infrastructure without really explaining what it is you're doing. Nevertheless, the tutorials take a long time to complete, which isn't surprising, considering Submarine Titans features half a dozen different resources, three or four of which are used for any individual faction. The Sharks and the Octopi need oxygen sublimators to power all their facilities, at which point they can harvest metal and the element corium, which are both used for creating military submarines and facilities. They must also create gold sublimators that produce an occasional surplus of gold from the ocean water, and you'll need to spend it on new research projects. You even need to build arms depots to maintain a surplus of ammunition for your submarines. It's a lot to keep track of and to have to balance, especially since the metal and corium patches tend to quickly dry up, but at least the Sharks and the Octopi can also build a marketplace structure that allows for the exchange of resources. Meanwhile, the Silicons must build silicon extractors that gradually produce their basic resource, energy accumulators for extracting power from metal, and corium extractors, just like the other two factions.

The resource model in Submarine Titans is complicated compared with most other real-time strategy games, so it'll be tempting for you to use the option to delegate control of your resource management to the computer, which will invariably do a better job until you've had a great deal of practice. You can actually automate your defense production or even automate your entire operation - and while these options sound useful, they effectively strip away layers of complexity from the game, making what's left that much less interesting. That's because if you remove the resource model, you'll find that Submarine Titans is otherwise a very simple game. Combat proves to be highly chaotic, as dense packs of opposing subs fire similar-looking weapons and blow up in identical explosions. Though each faction has a few support subs that can potentially inflict a lot of damage against dense groups of enemy units, you'll typically find that these dense groups of subs will sooner win. Part of the problem is that base facilities in Submarine Titans are very flimsy, so an aggressive suicide rush tactic aimed straight at the heart of the enemy base can often have devastating results.

All your subs move sluggishly, and there's a lot of busywork with resource micromanagement and base building to occupy your time when you're not trying to get your subs to go someplace. Consequently, there's not a lot of momentum in Submarine Titans matches, which makes them rather unexciting. The combat is too straightforward to allow for any significant tactical subtlety. Even though you can maneuver your subs between five levels of undersea depth - and they'll automatically dodge up and down in battle when you set them to aggressive mode - the effects of this are negligible in practice. So what happens is if you're ever unprepared for an enemy attack or if you have a greater number of subs of your own, the subsequent battles will tend to play out predictably.

As with many old-fashioned real-time strategy games, Submarine Titans ultimately becomes an exercise in resource gathering, because the players who build and expand their infrastructure faster will almost certainly win. This wasn't perceived to be a problem in real-time strategy games a few years ago, but considering that many games in the genre have since abandoned resource gathering altogether in favor of sophisticated tactical combat, Submarine Titans seems like a step backward - instead, its resource gathering is what's complicated, and the subsequent combat is unsatisfying. And since its production values aren't commendable either, there remains little about the game that's worthwhile. 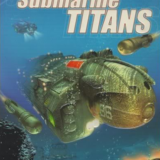