While being underwater slows things down, it adds a few interesting and enjoyable twists to the gameplay.

Under the broad heading of action games, there is a relatively rare subgenre known as the underwater game, and Sub Rebellion is an example of this sort of title. In this mission-based shooter, you'll pilot the advanced submarine Chronos through the murky deep, and as one might expect, things move a bit more slowly in Sub Rebellion than in the typical action title. But while being underwater slows things down, it adds a few interesting and enjoyable twists to the gameplay. Although you'll find few frills in the actual presentation, the end result is largely worth it, and many players will find the game to be an enjoyable experience.

In the world of Sub Rebellion, most of the planet's surface is underwater, and submarines are the preferred mode of transportation. The military-industrial complex has taken advantage of this fact to seize control of the world by force, but their harsh methods have given rise to a rebellion. In the grand tradition of video games, you pilot a single vehicle so powerful it can shift the balance of power by obliterating scores of enemy subs, taking out gigantic bosses, and laying waste to enemy bases. The story isn't terribly original or complex, but it's integrated fairly well into the game.

At your headquarters, you'll be provided with a variety of options that you can access between missions. You can select from several control settings and view video tutorials before setting out on a mission on the world map. When you've completed several missions, you'll be able to browse through the undersea treasures you've acquired and buy and equip weapons, shields, different paint schemes, and more. There are seven important aspects of your sub to configure, and the different kinds of equipment are suited to different situations. In most cases, one engine won't completely outclass another--for example, a particular engine may have a slower top speed but a faster turn speed. The dry shield is tailor-made for missions where you'll spend a lot of time on the surface. New items will become available for purchase as you complete missions and find more treasure. Customizing your sub quickly becomes one of the most interesting and enjoyable aspects of the game, and it gives you incentive to press onward through missions and acquire more buried relics.

It's unfortunate that the tutorial portions of the game aren't interactive, because the controls will take a bit of time to get used to. There are three available control settings, all of which rely on the controller's shoulder buttons for movement. One set is mapped to forward and reverse, while the other controls ascending and descending. The face buttons are used for fire control and surfacing functions, while the left and right analog are used for positioning the nose of the sub and controlling the camera, respectively. Because you'll need to use two hands to maneuver your sub effectively in combat, you'll seldom find time to reach for the camera controls. This doesn't matter much in the end, however, as you're given a wide and effective view to begin with. Pressing the select button will toggle between a third-person perspective and a first-person perspective. The former is more useful for dodging enemy fire, while the latter provides an unobstructed view of your surroundings and sonar readings.

The cleverly implemented sonar, which is mapped to the X button, is crucial to gameplay. When you tap the button, you'll hear a familiar ping and see the immediate area mapped out in wireframe. Landscape and objects are displayed in white, enemies are displayed in yellow, and treasures are displayed in purple. Within a very short time, the game will have you pinging the sonar every couple of seconds. Sonar will allow you to see through several layers of rock, meaning you can target and attack opposing forces with torpedoes even if you don't actually have a line of sight. More than anything, this defines the gameplay experience.

Your craft will carry two sets of weapons at any given time: one for underwater combat and another for surface combat. Each set is composed of one short-range weapon and one long-range weapon, and the functions of both are more or less identical. As in many 3D shooters, you'll be able to lock on to multiple targets at once by holding down the fire button while aiming at a target. The time it takes to acquire a lock is contingent upon the distance between you and the target and the type of weapon being used. Additionally, each weapons system is capable of firing a certain number of homing projectiles at once with different techniques and tracking effects. The frag torpedo system fires a large torpedo, which in turn releases five smaller ones with high speed and a strong tracking effect. Prox torpedoes are a bit slow but can damage surrounding targets with a large explosion.

The missions themselves are objective-based. You'll be briefed regarding your objective and the mission area beforehand and will have a chance to configure your craft accordingly, though your objectives will often change as you go on. While most of your runs will center squarely on causing massive underwater destruction, you'll also be charged with excavating monoliths (by blowing up the surrounding rock) or protecting friendly targets. The AI can be inconsistent, but it will often take advantage of the surroundings and intelligently attempt to evade your torpedoes. The overwhelming odds and several massive boss enemies ensure a steadily increasing challenge.

In addition to fulfilling the mission requirements, you can hunt down buried relics from ancient civilizations by detecting them on sonar and then uncovering them by pelting the area around them You're given a letter rank at the end of each mission that is calculated based on your completion time, shields remaining, destruction ratio, and percentage of treasure found. This means that you'll have to track down most of the treasure and blow up every destructible object you can find in the area to attain the best ranks. Making things easier is the fact that excelling in certain areas will offset deficiencies in others, and you can replay missions as many times as you choose. The missions are long enough and involved enough to give you a feeling of satisfaction when you complete them, and you can still move through at your own pace while still achieving a good score.

Sub Rebellion relies almost solely on its gameplay to entertain, as the graphics and sound departments are a bit neglected. The ship models are relatively simple and a bit bland in design. Your ship, supposedly the most advanced sub existing in the 22nd century, looks a lot like subs that exist in the present day. Some of the bosses pilot craft with slightly more interesting designs, but nothing seems particularly inspired. Some of the weapon effects are appreciable in theory, but the technical execution is noticeably lacking in flash. The explosions are the same primitive expanding spheres that have been in use since gaming's earliest 3D days, and advanced shading or light-sourcing techniques are completely absent.

The sounds you'll hear are entirely appropriate, as they're exactly what anyone who has seen a movie or television show involving a submarine would expect. The problem is they're not at all distinctive. Radio chatter from the enemies provides a bit of aural flavor, but the fact that they all have the same voice dampens the effect. The music is actually a pleasant surprise, with themes that vary depending on the area you're in. While neither the sound quality nor the composition is particularly striking, the soundtrack adheres to the expectations of what a video game should sound like.

Sub Rebellion is the type of game that can't quite be called impressive but definitely has a fair amount of worth as entertainment. The game's small deficiencies are balanced by its small positive qualities, while the overall solid game design barely avoids being overshadowed by unexceptional production values. There is a substantial number of missions, and palpable rewards for replaying them exist in the form of new weapons and paint schemes to earn. Those who don't mind a slower-paced shooter and can deal with the lack of eye candy may find Sub Rebellion to be a worthy gaming experience. 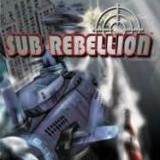