Firefly Studios has polished up its old game nicely and has sent it on a long road trip into the Crusades.

Last year's Stronghold was a slightly uneven combination of city builder and real-time strategy game, with an emphasis on siege warfare. It had the distinction of being the only castle simulation from a major publisher since Interplay released Quicksilver's Castles II in 1992. Aspiring warlords could forgive Stronghold's shortcomings, since the original game gave them the opportunity to build and raze walls, pillage countrysides, and launch cattle from catapults. Firefly Studios has now polished up its old game nicely and has sent it on a long road trip into the Crusades.

Stronghold: Crusader is the stand-alone successor to Stronghold, meaning you don't need the original Stronghold to play it. It takes Stronghold out of Europe and into the Holy Lands, giving it a tighter focus and a more exotic flavor. The economic missions that had you racing against the clock to fulfill contrived objectives have been removed from the game. Instead, Stronghold: Crusader places more emphasis on the fine art of defending or storming a castle. After all, isn't this what you want when you pick up a box with a knight standing in front of a castle? When players first looked at the box for the original Stronghold, they probably wouldn't have guessed that they'd be spending their time accumulating 500 units of cheese.

Indeed, the original Stronghold divided its single-player missions into two types: military and economic, though the latter, which generally involved raising crops and stockpiling resources, wasn't as popular as the military missions. It also had a single-player skirmish mode and head-to-head multiplayer. But Stronghold: Crusader presents you with many more options. For instance, you can play skirmish games against AI opponents on a number of different maps, even in multiplayer. Some are completely even playing fields, while some feature interesting balance dilemmas, giving advantages and disadvantages to each player. The skirmish maps can be played against your choice of AI opponents or in multiplayer games.

However, players who are new to Stronghold's economic model, which actually folds elegantly into its combat model without upstaging it, will likely want to start out by playing with the castle-builder option. This is a sandbox mode that, like in the original game, lets you learn the unique features of Crusader's new desert maps without having to worry about fielding an army to defend against attacks.

But the centerpiece of the single-player game is the "crusader trail," which presents a series of 50 battles, each more difficult than the last. As you play, your performance determines the ongoing date, which serves as your score. You can go backward to replay old missions, and if you do better, the date will roll back. Although this doesn't have much impact on the actual missions, it's an interesting alternative to tracking a score based on points.

Unlike the missions in Stronghold's military campaign, most of the missions in the crusader trail let you build you own castle. This makes it more like a series of skirmishes than the original game's linear sequence of canned scenarios with prebuilt castles. The crusader trail missions do a good job of incorporating specific units and strategies, and you will gradually improve your skills as it ramps up the difficulty level. In addition to a basic tutorial, there are four historical campaigns, in which each chapter highlights specific game elements, such as which units are best suited for which purposes, how to manage your taxes, and the differences between various crops. Each mission in these campaigns is like a puzzle with a historical context, which, once solved, will teach you to play better. Stronghold: Crusader has numerous options to introduce new players to the game as well as plenty of challenges for veterans of the original Stronghold.

Stronghold: Crusader makes some important changes to the dynamics of the original game. Most significant is the addition of seven new Arabian mercenary units, some fairly redundant (Arabian bows are just weaker archers), some potentially overpowered (the horse archers are a potent combination of speed and ranged attack), and some adding unique game dynamics (assassins can secretly open gate towers to let your units into an enemy's castle). The new units are all hired from the mercenary camp, which can be built cheaply as soon as you start building your castle. To recruit them, you don't have to harvest resources, construct weapons, and accumulate an arsenal in your armory, like you have to with their European counterparts. Instead, just fork over some gold, and these new Arabian units will show up.

The fact that military units come into play much more quickly in Stronghold: Crusader than they did in the original game has a dramatic effect on gameplay. Because the marketplace can quickly give you gold, which can now quickly give you an army, it's an important military building. If you're attacked, you can convert your goods to gold and hire instant defenders. To get down to conquering, there's no immediate need for iron, leather, wood, tanners, blacksmiths, or pole turners.

To be fair, mercenaries aren't as powerful as the traditional military units, but they definitely change the way Stronghold is played. Some of the scenarios can be easily beaten by simply selling off your starting goods, using the gold to hire mercenaries, and then rushing the AI. Of course, this also means you'll be attacked much earlier in a scenario. There's nothing quite so annoying as watching a mob of cheap slaves torching your outlying farms before you can marshal your defenses. The end result is that Stronghold: Crusader plays much more like a traditional combat-oriented real-time strategy game than its predecessor.

There are some other differences between Stronghold: Crusader and the previous game that may seem subtle at first. For instance, religion and ale have more impact on your people's happiness in Stronghold: Crusader. Religion cost too much gold and ale required too many steps in the resource chain to be really useful in the original game. But in Stronghold: Crusader, they have a more powerful benefit--they are effective ways to offset high taxes, food shortages, and crowding. Even better, you can improve efficiency by adorning your castle with more "bad things," like gallows and dungeons, while serving up religion and ale to counter the happiness penalties. Although these may seem like minor tweaks, they do a good job of adding more choices to how you play.

After fighting Stronghold's European warlords (who make a return appearance in Crusader), it's nice to get out and see the world. The desert terrain and buildings look great, breathing a lot of new life into the game's detailed 2D engine. The new music is rousing and distinctive, and it's always a thrill to hear the war cry when you mass-select a group of soldiers and give them attack orders. Visually and aurally, Stronghold: Crusader certainly does justice to its subject matter.

The Middle Eastern setting allows for a new architectural look and terrain set, but unlike the changes to the architecture, the changes to the terrain aren't simply cosmetic. Because you can't build farms in the desert, the patches of fertile land on some maps are important strategic points. This also makes Crusader play like a more conventional RTS, since this can take the focus off the castles themselves. Now each side has to secure fertile land to maintain a food supply in these barren environments.

Stronghold: Crusader's interface still has some of the same problems that the first game had. The building tabs are still haphazardly arranged at the bottom of the screen. There's no way to jump to the subject of important messages such as "We're under attack!" Stronghold could use more tooltips, range indicators for missile units, and a few more hotkeys to keep you from having to wade through your castles and armies to get where you need to go. Because there are no effective unit formations, the tactical AI still requires a fair amount of micromanagement to mount a successful siege, and computer opponents still seem fond of sending units in a steady trickle rather than amassing effective assaults.

But other than these minor problems, Stronghold: Crusader is a marked improvement over the previous game. Considering its new campaign options, more-satisfying single-player missions, and tweaked gameplay, it's a safe bet that fans of the original game will have even more fun storming the castle. 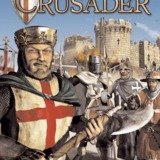