Home is where the siege weapons are.

Ah, the humble real-time strategy soldier. Alone, he or she is nothing but a tiny dot on a vast map. But a mass of soldiers forms a blob of incisive power that can cut a swath of blood and destruction across the countryside in whatever direction you see fit. Stronghold Crusader 2 embraces this blob warfare, offering a plethora of different units you can choose from to form your attacking force while your personal castle--the Stronghold series' signature element--hopefully stays safe from harm. But though its parts come together to form a solid strategy game, the uninteresting options at your disposal never raise the game above being one where opposing blobs crash into each other until one splatters.

Stronghold Crusader 2 puts you in the shoes of either King Richard's or Saladin's forces during the Crusades, as you square off against the other in self-contained battles raging across the desert landscape. The goal is the simplest one in strategy game history: defeat the enemy Lord and take his castle. But lest you think you're merely expected to churn out soldiers and crash them into the opposition, the game requires you to establish an intricate economy so you can actually afford these soldiers and build structures that will let you make different kinds of units. So far, so familiar.

Where the game gets a bit more interesting is when it asks you to attract people to your castle to live and work. You start out with a set population that increases as you become more popular with your subjects. You can make them happier by decreasing taxes (even going so far as outright bribing them), increasing their rations, or building them inns and places of worship so that they can drink and pray. Likewise, you can adjust consumption in the other direction to conserve resources and gain more gold, but you'll be less popular as a result. These concerns are controlled with a convenient panel that lets you change values and tells you the popularity bonuses or penalties you get from each adjustment. Tying popularity and population growth to troop production gives the game a simulation element, and lends the flow of your economy extra texture. At the same time, the fact that you only need to keep track of one statistic ensures that the sim portions don't bloat and consume the rest of the game.

The downside to this simplification reveals itself once you build your castle. As you start becoming more popular and more people come to live in your keep, you need to build houses to accommodate them. This is in addition to the structures that produce resources like wood and stone, food buildings, and other luxury services (which also require people to run). By the time you're prepared to march an army towards the enemy, you'll want to construct a wall around your precious production plant. Then, voila, you have a working, living castle.

Given how castles are the main draws of the Stronghold series, it's odd how little attention they require once your economy is running. In most strategy games, forward momentum is key. You get set up, and then you try to make inroads towards your objective, eventually busting through enemy lines. You only ever turn your eyes back to your starting base to quickly make more troops, and some games don't even require that. Stronghold Crusader 2 tries to put a lot more focus on its eponymous stronghold, but the simplification of its simulation elements means that you can build a base and forget about it here, too.

Without a compelling reason to continually manage your stronghold, what you're left with is the stark, bread-and-butter, blob-on-blob action the RTS is commonly known for, and Stronghold Crusader 2 executes on it fairly well. You can pick many different kinds of units with varying specializations like ranged attacks, speedy movement, or heavy armor. Unfortunately, most of the troops you can employ are really boring. In fact, the Crusaders are all traditional infantry and cavalry, which makes for a painfully vanilla experience. The Arabic forces are a fair few degrees more interesting, thanks to units like the flame-hurling oil pot thrower, and the stealthy wall-scaling assassin. My favorite is actually the horse archer, which fires at enemies while moving, making micromanagement a rare joy as you weave in and out of less-mobile squads. Still, aside from those few bright spots, the game's units aren't particularly exciting.

You get precious few proactive resources beyond the troops themselves. You can construct turrets and traps to keep enemies out of your castle; you can even pour boiling oil on them! But cool as these might be, they're all reactive insurance that comes into play only if you're losing, yet another element you build and forget about. But then there's the siege weaponry, quite possibly the game's biggest success, and the one way with which your castle walls actually change the way you play. Though castles aren't something you particularly care about tending to, you still must defend them, and their walls serve as a giant target for the opposing teams to breach. Your army can't breach walls without spending an eternity hacking away at them, so siege weaponry is often necessary to break the stalemate that the walls provide. These weapons give you the power to knock down walls, but you can also load them with fire or even diseased cattle that explode in a cloud of plague.

Make no mistake, Stronghold Crusader 2 is foremost a multiplayer skirmish game. Its single-player campaign is labeled as a “learning campaign”, and though it tries to ease you into the game's mechanics, it fails to teach you the rudimentary strategy necessary to be successful. The missions punish you with progressively-increasing waves of enemies that quickly outpace your production. The game also provides you with a large amount of skirmishes that challenge you to beat the computer in games closer to multiplayer matches that are arguably more fair than the campaign, though you still aren't eased into the game's mechanics by any means.

You can tailor the games as you see fit by changing starting gold levels and picking from a large selection of maps. The different dynamics each map creates varies--choke points, resource placement--create different enough game conditions, but the one thing they all share is that they're all fairly small, so you are vulnerable to rush strategies and getting caught with your pants down. You might end up feeling unnecessarily constrained if you're used to a bigger setup buffer, and you need to act quickly and build the right sequence of buildings if you want to stand a chance.

Stronghold Crusader 2 understands the art of the troop blob, but that alone doesn't make it a good game. Its lack of interesting units, underdeveloped castle-building options, and terrible tutorials hold the game back. Blob warfare is still fun, and directing an army never gets old. But man cannot live on blob alone.

View Comments (32)
Back To Top
6
Fair
About GameSpot Reviews 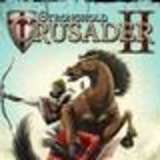 Jeremy Signor spent over 20 hours playing Stronghold Crusader 2, and came to the realization that he's utterly terrible at it. At least he still can manage to play Starcraft without embarrassing himself.