Psikyo's take on the classic conventions strike as true as most modern attempts, and the fans of such games should welcome the results.

For a genre that many figured would be long dead by now, the 2D shooter is looking as lively as ever. Thus far this year, the genre has seen a healthy number of releases across multiple platforms--Treasure's Bangai-O and Capcom's upcoming Mars Matrix are filling out the Dreamcast front, while some of Agetec's recent developments are providing PlayStation owners with access to this seemingly revitalized niche. The Psikyo-developed Strikers 1945 is the most recent manifestation of Agetec's spree, and it should go over well with fans of the genre--it's an altogether solid shooter, if a tad uninspired.

The PlayStation version of Strikers 1945 is, in actuality, the second Strikers 1945 game. Agetec presumably omitted the signifier in order to avoid confusion--it is, after all, the first Strikers game to appear on a US console. Psikyo originally released it as an arcade game for the NeoGeo hardware, and subsequently ported it to the Sega Saturn system in Japan. All of this happened in 1998, three years before Western shooter fans would have any sort of convenient access to the game.

As the name implies, Strikers 1945 takes place in front of World War II backdrop, and you take control of any of six planes loosely based on the actual craft of the era. While all the ships maneuver more or less identically, each has its own set of weapons and a unique special attack. The Flying Pancake's special attack, for instance, summons a duo of stealth bombers that both bombard enemies with shells and shield you from their attacks, while the Shinden's guns, when fully charged, shoot forth a highly damaging laser phantom of the ship. Charging weapons is achieved by holding down the fire button, and it results in a more powerful shot. There's an onscreen meter that determines precisely how powerful a given charged shot will be, and it gradually fills as you blow things up. This grants the game a certain strategic element, albeit a very mild one. The sheer variety of the ships lends the game a good deal of replayability--each ship proves very distinct, in terms of the gameplay experience it provides and the visual flavor its attacks bring to the proceedings.

That said, shooter fans should brace themselves for an altogether familiar experience: Throngs of enemies will buzz about the boards, emitting ceaseless streams of round shells. Contact with enemies or their bullets means death, and success is granted to those who are quick to spot and exploit enemy fire patterns. Strikers seems to favor largish enemy ships that take a few shots to down in lieu of smaller one-hit kills. The latter are by no means absent, though, and to its credit, Strikers does a decent job of mixing things up just when you think you're getting comfortable. There are also several midlevel bosses, mostly in the form of multiturreted fortresses. Some of the setups are pretty elaborate--in one stage, after defeating a particularly large cannon, the remaining wreckage is scooped up by a huge crane and mounted on a giant robot's frame. The resultant robot becomes the level's final boss, and it proves adequately difficult.

Psikyo went all out with Strikers' bosses--they're huge, multiformed, and as difficult as you'd expect. Each one is a vehicle of some kind (save for the last), and a prelevel load screen serves to introduce you to them. Their names are quite nonsensical--one of them is referred to as a "giant flying boat." But their names are ultimately irrelevant, as the bosses are often several screens long, and fighting them can sometimes take longer than going through their home stages. The battles are, for the most part, exciting enough to make up for the abbreviated missions, but at times, the game's arcade roots are pretty apparent.

Strikers 1945's shortcomings are by no means anything that fans of this type of game aren't already used to. With the exception of a small handful, "modern" 2D shooters are frequently somewhat short and feature-barren, and their visuals tend to be technically modest. Though some make up for the latter with stylistic inventiveness, Strikers certainly doesn't. Think 1942 meets Raiden, and you'll have a good idea of the game's aesthetic feel. Some of the enemies manage to look suitably cool, and the special attacks spice things up a bit, but when compared with Einhander's slick presentation, or Bangai-O's zany character, Strikers just doesn't stack up. Aurally, the game is easily forgettable--the music could have been lifted from any other shooter, and the sound effects are unremarkably flashy and explosive.

Strikers has it where it counts, though--while it by no means redefines the genre, it probably wasn't trying to in the first place. Psikyo's take on the classic conventions strike as true as most modern attempts, and the fans of such games should welcome the results. To some, shooters never get old. This is precisely the type of person that should check out Strikers 1945. 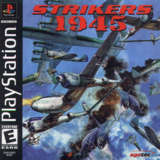